Fish lovers in West Bengal may soon be threatened with a scarcity in the supply of fish or rise in price or both.

The fishermen and the trawler owners are very angry. Without giving a thought to the consequences of a continuous arbitrary rise in the price of diesel, petrol, kerosene and cooking gas by the central government has led to severe disbalance in the finance and employment sector in the indigenous shipping industry in West Bengal.

Add to this, the absence of subsidy for petrol the trawler owners, the fishermen and the allied workers were waiting for, which according to them, was ensured by the Central Government.

After Prime Minister Narendra Modi announced the nationwide lockdown on March 23, 2020, all fishing activity came to a standstill. The trawlers that were still at sea had to hurry back with their catch but the smaller players were left holding nothing. The situation is graver today than it was during the lockdown.

According to a recent report, 10,000 of the total 15,000 trawlers in West Bengal have been forced to come to a halt because of the continuous spike in the price of diesel. The rise in price has not been overnight but has been going on for the past several months. 15,000 fishing trawlers are already there for fishing. Then, according to the leaders of associations in fishing and trawler businesses, the government fell back on its promise to implement a minimum support price to them.

Shyamsundar Das, General Secretary of the Digha Fisherman and Fish Traders Association expressed regret because all hopes of the fishermen and trawler owners to get diesel at a support price from the government at the centre would be enacted by the Government at the centre. This did not happen. There are four lakh fishermen who are directly engaged in fishing in West Bengal. Around six lakh people are indirectly dependent on this industry for their daily bread.

Samaresh Tola of East Midnapur who lives in Junput, says that he owns five trawlers “which I have been forced to stop from running for the past two months before the rise in the diesel price. Each trawler employed 15 fishermen and now I am finding it a huge struggle to look after the upkeep of these families that comes to around 75 people.” And their families of course.

Subodh Chandra Kanda of Khejuri who owns seven trawlers complains that all seven trawlers have not touched the ocean waters for three months and the families of the fishermen I employ are in a very bad situation. 12 to 15 fishermen live in each trawler who sail in the trawlers for seven to ten days at a stretch. There are three trips every month.

Earlier, each such trip demanded Rs.1 lakh 30,000 only for diesel. Add another Rs.20,000 for the ice needed to preserve the fish on each trawler. The salary of the fishermen per trip amounts to Rs.50,000. Each trip calls for 2000 litres of diesel.

This is besides the associated expenses on fishing nets, the food needs of the fishermen, different kinds of rope, the driver’s salary, maintenance of the tractors, all of which mean a cost of Rs.70,000 per month. The smallest fishing dinghy (for fishermen who do not take trawlers) costs Rs 80,000 and a small gill-net comes for Rs 25,000.

For every trip, the owner of a trawler would make a profit of rRs.30,000 a month. But this was before the rise in the price of diesel. Now, after the constant rise in price, the cost of each trip has gone up by Rs.30,000 swallowing the entire profit and turning the business that will soon be threatened by losses, labour trouble, rise in the price of fish in the wholesale markets and fall in the demand for the same pushing the entire industry into further crisis.

The decision to allow or not allow a minimum support price lies with the Government at the centre and not the state. The trawler owners are continuing to pay the fishermen their monthly salaries. But how long they will be able to continue this, they themselves are not sure about. The supply of fish will come down sharply and the average consumer may have to cut fish out of his daily diet, a must in every Bengali family.

Bijon Maity, General Secretary of the Kakdwip Fishermen Welfare Association says that around 80% of the total cost of the business is spent on diesel since the rise in its price. So, both the fishermen’s associations and the trawler owners have decided to sit on dharna on February 22 at Rani Rashmoni Road in Kolkata for the whole day which will comprise of several thousand fishermen in the state.

The movement will continue till the Central Government does something positive about the support price to those directly involved in the business of fishing.

This is just a rough estimate of a slice of the large fishing industry in West Bengal. In real life, the industry is much larger and complex than what is described here. But this is the basic problem that applies uniformly to every level of the fishing in West Bengal and elsewhere in the country. 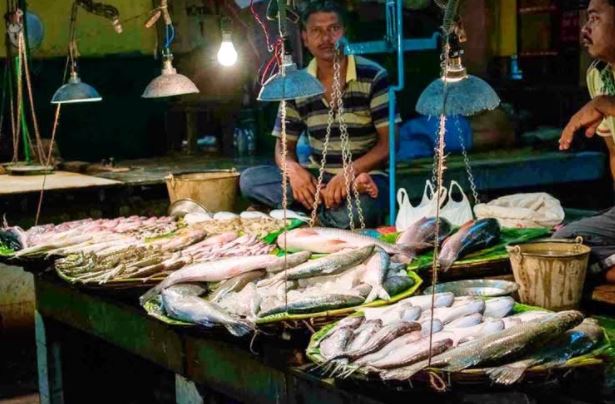