A wave and a hug

As evening descends and one moves from Chandigarh, the capital city of Punjab, towards the state’s hinterland one comes across women, children and the aged walking to the roundabouts on the roads, whether on highways or the arterial roads.

They carry and wave the flags of the farmers movement. Many of them carry placards with the simple message ‘No Farmers, No Food’. People from the passing vehicles greet them with a thumbs up, a wave or a simple smile with solidarity expressed through the acknowledgement.

The big hotels or eating joints on the highways carry the message ‘we support the farmers.’ Public buses carry stickers on the doors ‘I Love (conveyed through an emblem of a blood red heart with the national tricolor embossed in the middle) Kisan’. 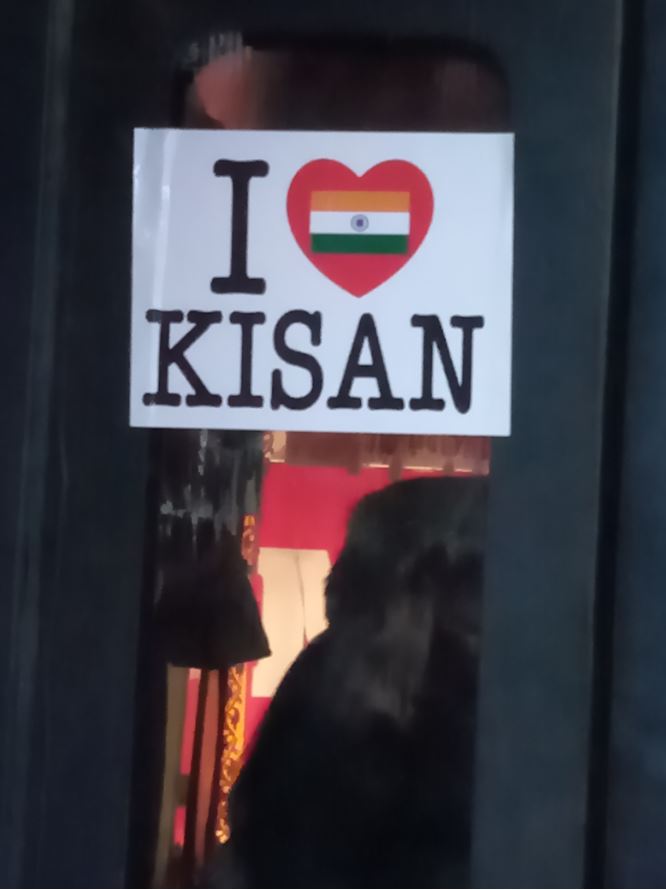 Contrary to the sustained campaign by the embedded media and vested interests to run down the farmers’ movement by claiming that it has lost steam, the movement is thriving on the ground with wide popularity.

A drive through Punjab confirmed this with street conversation all across the state focusing on the farmers movement, and details around it. Ordinary folk are well informed about the broad details of the three farm laws, and insist that repeal is necessary if agriculture is to survive.

It is evident from the ground that the farmers’ movement has brought the spotlight on important issues concerning the common person. Unemployment is being discussed widely, with reference to the economy and the rising prices. Most agree that the politicians are not particularly concerned, and seek to divert attention through divisiveness.

This reporter was part of a heated debate amongst a group of youngsters, a couple of them drunk, on a local bus from Ludhiana to Raikot. “They must give jobs, no matter whether they are government, private, contractual, daily wage or whatever. What is the use of parents spending their life’s earnings on education of children if there is no hope of employment, what to talk of decent employment? Today there are attempts to ruin even agriculture,” was their consensus.

The play out of the farmers movement on the social media, people agree, has involved the youth from the mofussil towns and larger cities. Observers insist that this has also had an impact in the rural areas where the young people are tech-savvy too.

Significantly, some business men have become household names in the villages of Punjab and an euphemism for corporate control of agriculture.

“You ask any person on the ground, no matter what his level of education is and he or she will tell you convincingly that the policies of the government, particularly the contentious farm laws are just aimed at filling the coffers of the corporate entities,” Buta Singh an activist based in Nawanshahr said.

This is pretty evident as even small traders and businessmen in the smaller towns complain of economic hardship.

Meanwhile in Punjab, people continue to demonstrate their support for the farmers in unique ways. Social activist Narayan Dutt from Barnala narrated how Darshan Singh who has retired as an assistant accounts officer came to the Barnala Railway Station to celebrate his retirement (a major celebratory occasion in Punjab) with the participants of the farmers’ movement. 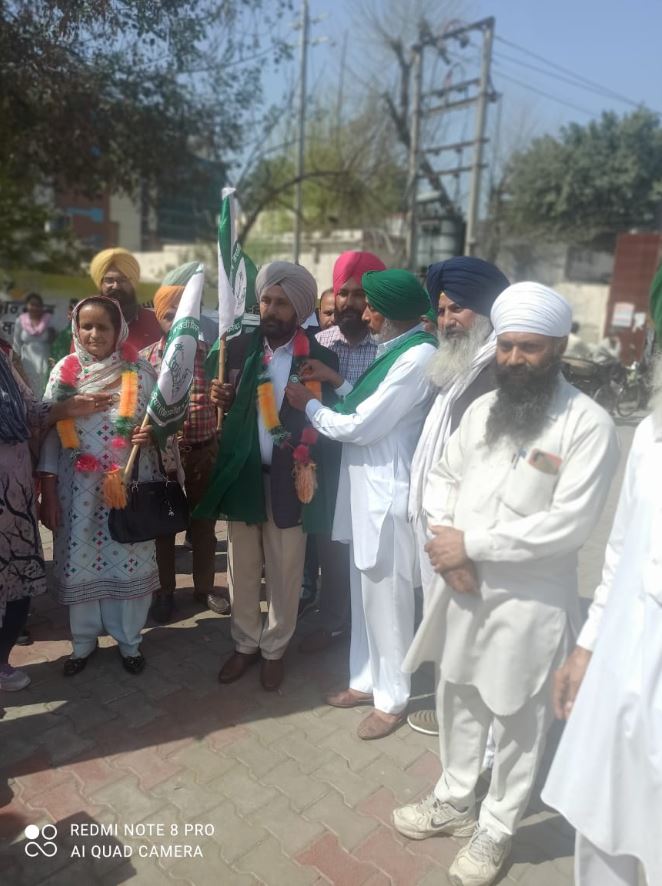 The railway station at Barnala is one of the major protesting sites. The retired employee was accompanied by his wife, relatives and colleagues. They were greeted by the large number of farmers and women participants of Barnala Sangharsh Morcha who pinned badges of the farmers’ movement and handed them flags to honour his services.

Saying that he realized his duty and was happy to be among the struggling masses, Darshan Singh made a financial donation as hundreds of peasants, both men and women, joined in the celebrations. Their leaders said that such acts are a sign of real progress when people begin to feel proud of spending the happiest moments of their lives with the struggling masses.

Professor Jagmohan who is the nephew of revolutionary leader Bhagat Singh pointed out that the farmers’ movement has gained widespread support across. “It is time for every section of the society to come out and speak against injustice,” he said while addressing a discussion organized by progressive Suhi Saver media in Ludhiana on Sunday.

Sukirat Anand who is one of the trustees at the trust that brings out the reputed Punjabi newspaper ‘Nawan Zamana’ from Jalandhar also spoke of the spread of the movement in times that are “not normal.” 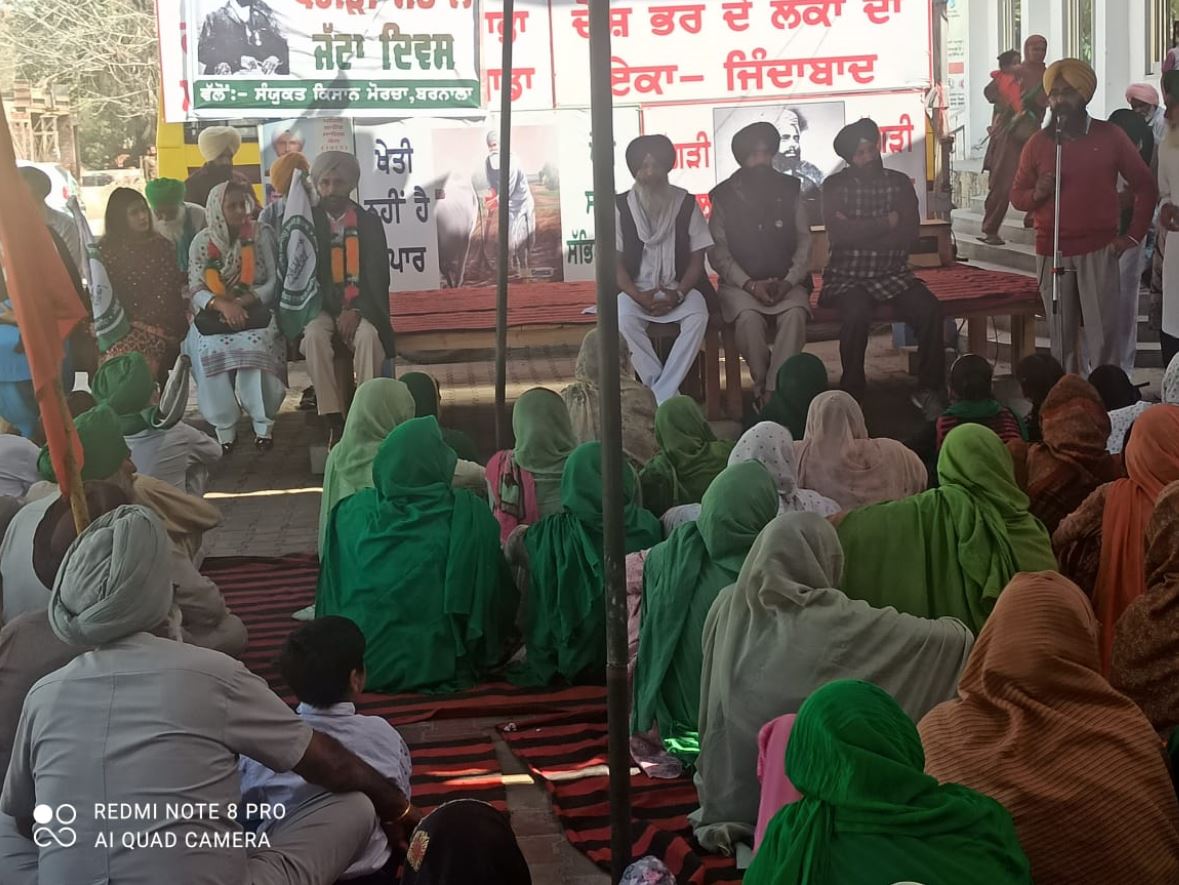