‘The candle is not important, the fire is’

A number of people in the state who are part of this new form of the Donyi Polo faith (see part one) are also members of the Rashtriya Swayamsewak Sangh.

On its website the RSS quotes its founder Keshav Baliram Hedgewar on the goals of the Sangh:

“Strength, it should be remembered, comes only through organization. It is therefore the duty of every Hindu to do his best to consolidate the Hindu society. The Sangh is just carrying out this supreme task. The present fate of the country cannot be changed unless lakhs of young men dedicate their entire lifetime for that cause. To mould the minds of our youth towards that end is the supreme aim of the Sangh.”

The RSS here is mostly viewed as a Hindu organisation working to strengthen the religion and counter the spread of Christianity and Islam in India. While the organisation and its members have been accused of forcing its version of Hindu philosophy, in Arunachal Pradesh it has learnt to make certain compromises. 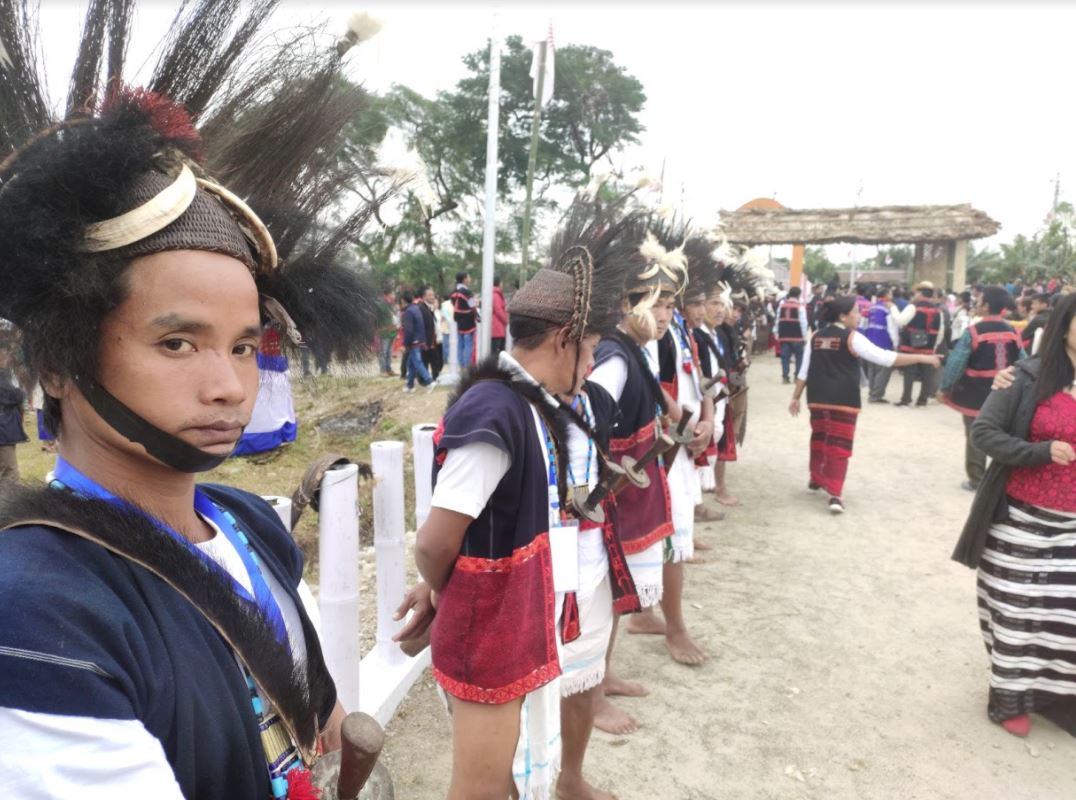 In 2015 Manmohan Vaidya, who was then its prachar pramukh or head publicist, visited the state capital Itanagar where he told journalists that choosing to eat beef would not preclude you from joining the RSS.

Vaidya said his was not a religious organisation but a social one. The rhetoric was repeated by incumbent chief Mohan Bhagwat during his visit to the state the following year, where he said the RSS has no religious leanings.

The sentiment is echoed by Onik Moyong at his residence in Pasighat.

A retired government doctor, Moyong is reluctant to meet people during the pandemic. However, he agrees to meet me at his residence, and at the indoor veranda of his home we maintain distancing protocols.

I take off my mask to drink the green tea.

“It is the world’s greatest/biggest NGO,” he says.

Unlike the usual images of men in khaki shorts wielding sticks, the doctor is casually dressed in his tracksuit.

He has been with the RSS for “at least 20 years”. He says it has no religious affinity and that he continues to eat beef.

“I liked the ideas/principles of nation-building and transparency within the organisation,” he says. He was introduced to it by his brothers-in-law.

An adherent of the old ways of worship, Moyong is critical of some new methods of worship introduced into the ancient belief.

Some of these changes include the weekly gathering of believers to a central place of worship, called the gangging in Adi and nyedar namlo in Nyishi.

Since the primary beings revered in the animist faith tend to be physical beings such as the sun and moon, the congregation style of weekly worship has been criticised for borrowing elements from more institutionalised world religions.

Another point of criticism is the use of incense sticks and candles at the gangging during prayers. 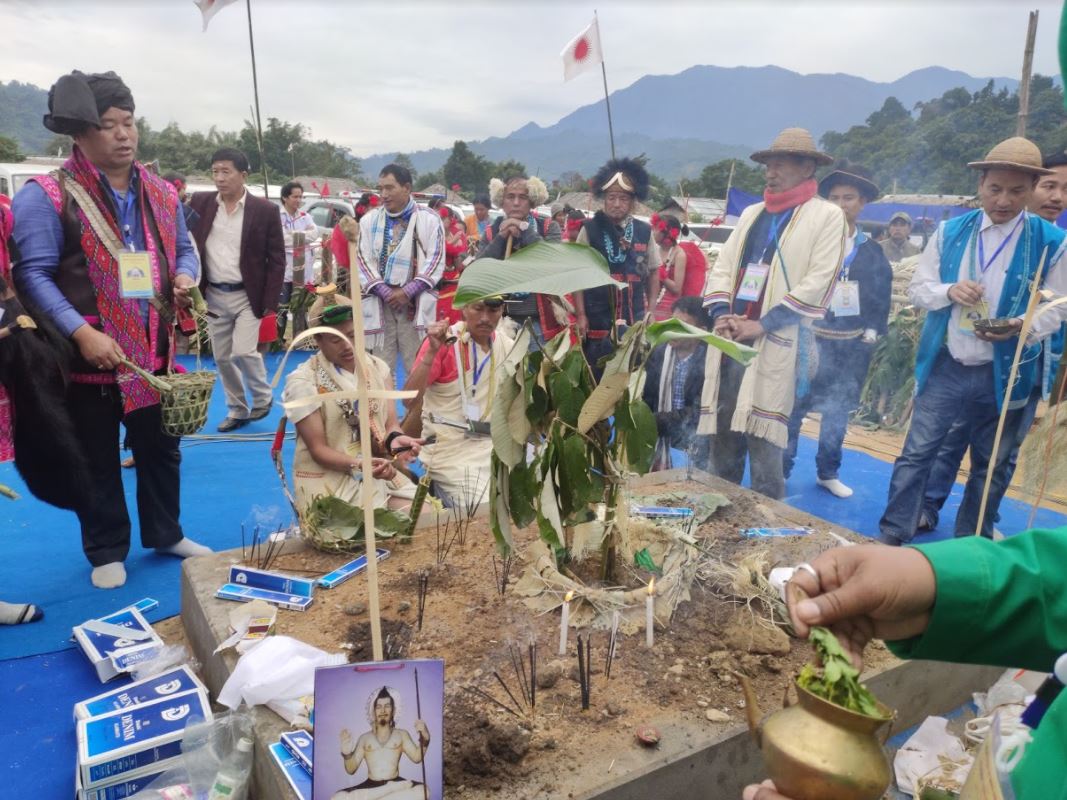 Inside the oldest such prayer centre in Pasighat, at the head of a dimly lit hall, on an elevated concrete altar are two women and an elderly man, engrossed in chanting prayers in the Adi language, as faithful members of the congregation line up to seek blessings.

After taking a few photographs, my friend and I join the queue.

Opiyam Tamuk, the second woman on the altar and in her forties asks if I am married.

“Then,” she tells me, I should have the ridding tied on my left wrist. It is a ritual thread made from a specific plant. My married friend gets his tied on his right.

We are inside the hallow hall of the Central Gangging, the first such prayer hall where believers of the animist faith congregate on Sundays to offer their prayers and seek blessings from a variety of gods, including Donyi and Polo, sun and moon.

On the altar wall are pictures of deities never before represented as such, and the floors are lit with candles and incense sticks.

While the candles recall Catholic cathedrals and the incense sticks are in tune with Buddhist or Hindu temples, practitioners of Donyi Polo do not see them as being at odds with their ancient beliefs.

On criticisms of cultural dilution, Tajom Tasung, president of the Indigenous Faith & Cultural Society of Arunachal Pradesh, says these modifications are rooted in ancient practices.

“We did not have candles or incense sticks, but whenever we would come from hunting expeditions it was a practice to throw a lit piece of wood into the same forest, to keep the forest spirits at bay,” he says.

He says that lighting fire has always been part of the Adi and greater Tani culture, and a change in the instruments of fire does not reflect a change in beliefs.

“The candle is not important,” he says, “it is the fire that is important”.

These changes are not cosmetic and have percolated into core parts of the faith.

In the past, animist rituals involving animal sacrifice or house-blessing ceremonies would only be presided over by shamans born with the gift to do so. Now, however, such shamans are trained.

Katung Waghe, chairman of the Donyi Polo Cultural & Charitable Trust entrusted with the construction of the khumko, believes the number of nyibus or shamans is dwindling because people no longer live “by the prescribed system”.

Without saying so directly, what he means is that with people converting to Christianity and not practising many of the ancient ways, the old faith is growing weaker.

The movement received a boost in 2017, when the state government established a Department of Indigenous Affairs intended to preserve and promote indigenous tribal cultures.

Another change adopted by adherents of the old beliefs has been to establish schools, where besides modern formal instruction the students are also taught a codified form of tribal languages, and trained in handicrafts that would have been common knowledge few years ago.

The first of such schools, the Nyubu Nyagam Yarko, was established near Seppa in the district of East Kameng: a hotbed of the revival movement of the Donyi Polo faith.

At his home in Seppa, he says the indigenous faith movement has been conducting Agu Vvkar rituals for at least five formerly Christian families each year.

The term literally means a return to home - or ghar wapsi, in the Hindi-Urdu phrase that gained much traction among right wing Hindu groups for its claim to bring converted Christians and Muslims ‘back home’ into Hinduism.

According to Dodum, many families who converted to Christianity and have suffered personal losses express a desire to ‘return’ when their prayers at church fail.

He says the process of return involves khyasang, the chanting of hymns to call back home (agu) the yaji yalo (spirits) of the elders who had ‘strayed’.

A family that wishes to return to the old faith then undergoes darkhya, a process of ‘repurification’.

Deteriorating health is among the many reasons people leave their faith and adopt the old faith, said Dodum. He gave the example of a prominent political family that underwent the agu vvkar after a number of their relatives died of unnatural cause.

“They want to return,” he added. 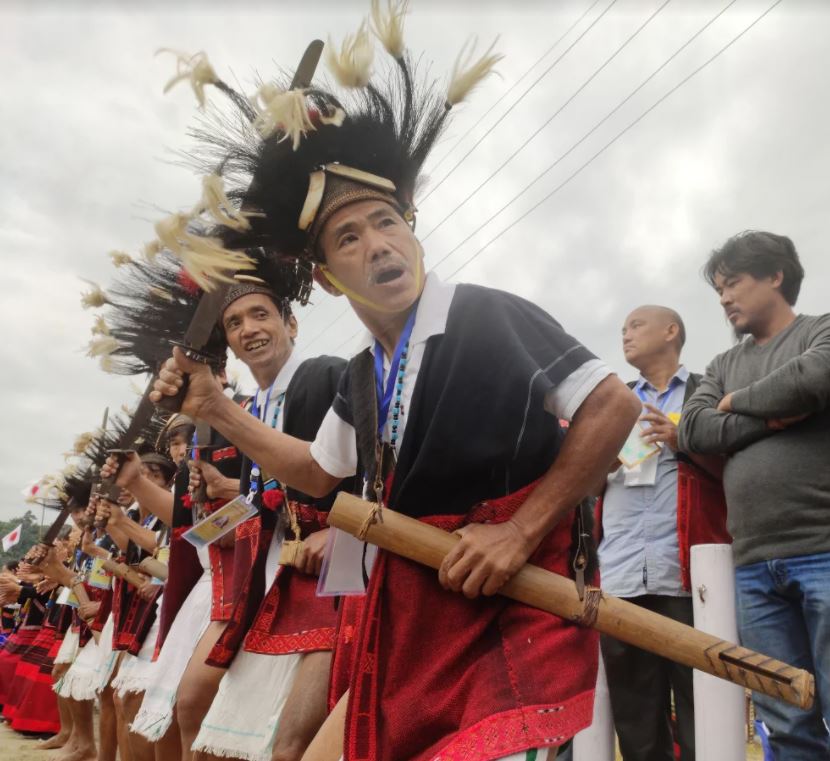