History Repeats Itself in Uttarakhand - Ninth CM Down

Uttarakhand, in the two decades of its existence, has earned the dubious distinction of being served by nine Chief Ministers of whom only one --N.D.Tiwari-- completed his full term in office.

Trivendra Singh Rawat of the Bharatiya Janata Party (BJP) resigned as Chief Minister on Tuesday. He has been replaced by Tirath Singh Rawat.

Barring Congress stalwart Narayan Dutt Tiwari, no other chief minister has been able to complete his full term in office in this state. And even this was an irony of sorts as Tiwari himself, a top Congress leader of undivided Uttar Pradesh, had opposed the creation of Uttarakhand.

In the current case, political observers on the ground point out that Trivendra was a non-starter right from the beginning.Two ministerial posts remained vacant for the last four years and out of the other nine, five were held by leaders imported from the Congress ahead of the last assembly polls. Of the remaining four, the party lost its most efficient leader and minister Prakash Pant after his demise in 2019. Two of the ministers come from the plains of Haridwar and Udham Singh Nagar, and the lone Dhan Singh Rawat represents the hills.

“Where is the BJP’s representation from the hills when you see the break up? Secondly, the differences between Trivendra Rawat and former Congress heavyweights who were a part of his cabinet like Harak Singh Rawat and Satpal Maharaj are well known. In addition to this there was immense resentment among the senior BJP leaders who had remained sidelined all this while,” said a senior political analyst who has been documenting the state’s journey right from the time of its inception.

“The very fact that the BJP chose to remove Trivendra Rawat after four years of his tenure as the chief minister points to the fact that the party has accepted that this engine of its much touted ‘double engine sarkar’ has failed to deliver,” CPI (ML) leader and prominent social activist Indresh Maikhuri pointed out.

According to him the now former Chief Minister’s tenure started with the infamous incident of his alleged misbehaviour with a woman teacher and ended with the Chamoli disaster.

“Imposing leaders on the people are bound to have such results. Trivendra’s removal simply points to the acceptance of non performance. If he was functioning well, what was the need to replace him? Four years’ of a young state have been wasted through a tenure marked by inefficiency and anti people initiatives like the laws on sale of land in the hills etc. The people will obviously be annoyed: according to veteran political analyst Jay Singh Rawat.

The state has seen the hopes and aspirations of its people being trampled upon by inefficient politicians and bureaucrats right from the beginning.

People have been pointing towards the failure of the successive governments on the development front -- roads, education, health facilities jobs. A large population in the state, particularly in the hills, continues to survive on ‘money order economy’ with their children joining the military. Even today people have to trudge several kilometers in the high mountains to the basic essentials of life.

A major concern in this state continues to be the unabated migration from the villages. The state has become infamous for its ghost villages.

The state has also been witnessing temporary migration at a very high level with people moving outside their villages seeking employment avenues and coming back only for short visits.

This is because successive governments have failed to create employment opportunities, particularly in the hill districts. People have been pointing that in the last four years not a single public service examination was held for recruitments and the examination papers for the recruitment of forest guards were leaked.

Instead parochial rivalries - Kumaon vs Garhwal ---divide the politicians. Along with caste rivalries with the common people paying the costs.

As Indresh Maikhuri pointed out, instead of frequent changes of Chief Ministers Uttarakhand needs a qualitative change in politics with the voters being placed at the centre of policy making. “It is the need of the hour that forces working for the interest of the people and the state come together to put an end to this practice of frequent replacements,” he said 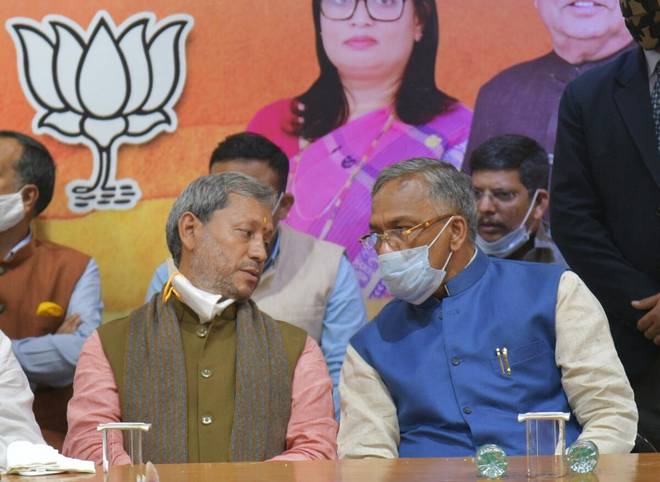