Union Home Minister Amit Shah was addressing a mega BJP election rally at plantation town Kanjirappally in Kerala's Christian belt Kottayam on Wednesday when news channels beamed visuals of two nuns, and two postulants of the Sacred Heart Congregation of Syro-Malabar segment of Catholic Church who were forced to de-board from a train at Uttar Pradesh's Jhansi railway station and detained briefly for questioning.

As the nuns were from Kerala, Malayalam channels continuously telecast videos in which Bajrang Dal-ABVP workers were found questioning the nuns and scanning through their Aadhaar cards while they were seated on their train berths. And accusing them of forced religious conversions, which proved to be a false allegation later.

Within minutes the incident evoked widespread condemnation across Kerala, and Chief Minister Pinarayi Vijayan and Opposition Leader Ramesh Chennithala sought immediate and prompt action against those who had attempted to attack the nuns.

The Union Home Minister condemned the incident. "A BJP government is in power in Uttar Pradesh, we will ensure that the guilty are punished," Shah said while campaigning for Alphons Kannanthanam, civil servant turned politician, as well as his party’s candidate in Kanjirappally. Incidentally, Kannanthanam belongs to the same Syro-Malabar Church. He reportedly has the support of some Bishops in the Church who are also supporting the BJP.

For the last two weeks, Kerala has witnessed high-pitched electoral campaigns involving the ruling Left Democratic Front (LDF) led by the CPI(M) and the opposition United Democratic Front (UDF) led by the Congress. Both the fronts were visibly worried about the emerging bonhomie between different Christian denominations in the state, including the Catholic Church, with the BJP that has pulled out all the plugs to better its electoral performance in Kerala.

As per the census, 18.38 percent of Keralites are Christians, and traditionally they were a solid vote bank of the Congress party. Several Catholic bishops have met Prime Minister Narendra Modi in Delhi in February along with Mizoram Governor P S Sreedharan Pillai and secured promises protecting the financial interests of the Church. Bishops of Orthodox and Jacobite factions of Kerala's Oriental Church have also met the PM seeking his intervention to resolve the decade's long feud between them. The BJP had adopted an accommodative policy, raising hope amongst these segments and securing their support in the process.

Some of the bishops have even extended open support to the BJP in the ongoing Assembly elections, and on its part, the party has fielded several Christians as candidates across the state.

The Jhansi incident has cut into this bonhomie, with the BJP’s efforts to secure maximum Christian votes now under strain.

When contacted Cardinal Dr. Baselios Mar Climmis of Syro-Malankara Church, one among the Catholic bishops who met the PM in Delhi in February, said he has demanded strong action against the Bajrang Dal-ABVP activists. He has also sought quick intervention by the National Human Rights Commission, National Women's Commission, and National Minority Commission. He has demanded a direct probe by the Central Government into the incident.

The Kerala Catholic Bishops Conference (KCBC) and Syro-Malabar Church have demanded quick action against the culprits as well as “affirmative action” to restore the confidence of the Christian community. The organisations have pointed out that the fundamental right to travel should be protected.

As per a press statement by the KCBC, the nuns belonged to Kerala, and they were on their way from Delhi to Odisha on a train on March 19 to celebrate Easter. The Bishops' Council said the nuns were verbally abused, and the Sangh Parivar activists even tried to attack the two girls with the nuns, whom they believed were being taken away for religious conversion.

"The incidents proved that no minority interest would be protected under BJP rule. Humble nuns were terrorized and attacked on false charges. It must be the duty of the union government to ensure speedy justice to them," said Opposition leader Ramesh Chennithala when contacted. He and other Congress leaders are busy using the incident to win back the support of the Christian community, especially the Syro-Malabar Church, the largest of the Christian denominations in Kerala.

The ruling CPI(M) has also condemned the incident in strong words with the Chief Minister being amongst the first to raise the issue.

In a memorandum addressed to Shah on Wednesday, Kannathanam reminded that Prime Minister Narendra Modi had in various meetings with the Christian community "assured equality for all, as enshrined in the Constitution."

"Such incidents perpetrated by fringe elements and groups create a sense of insecurity in our minority community," he said, presumably under pressure from the Catholic Church. The Kerala BJP sent a letter to Uttar Pradesh Chief Minister Yogi Adityanath."The party condemns the incident. It seems the police also took hasty action without verifying the facts. We want action against the perpetrators and police officials who detained the nuns," party vice president George Kurian said in the letter.

However, the Church's displeasure is palpable with Father Jacob G Palackappilly, spokesperson of the Kerala Catholic Bishops' Conference being quoted by the Indian Express as saying, "Every year during the Holy Week or days closer to Christian festivals, incidents like this happen. We feel the Government at the Centre does not have any regard for the Christian community."

"Article 19(4) of the Constitution provides every Indian citizen the right to move freely inside the country. The Constitution also guarantees the right to wear what we want. We want to ask Uttar Pradesh Chief Minister Yogi Adityanath — if he can move around in the country in saffron robes, why can't religious personalities of other religions do the same in their customary attire?" he asked. 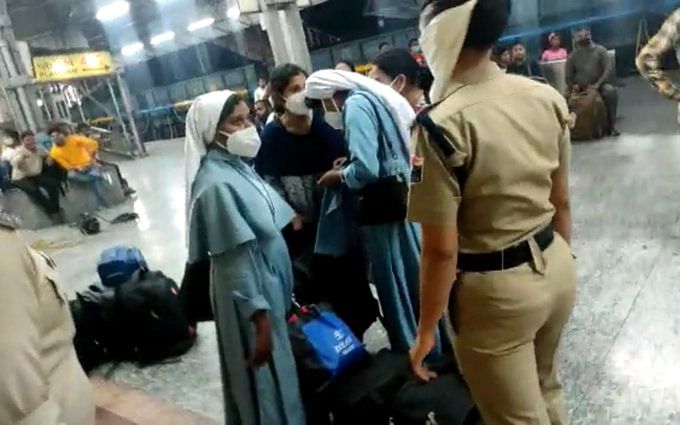