The Politics of Controversy

No such thing as bad publicity…

The politics of controversy dictates that an individual be treated as a cog in the wheel to forward the party agenda. With elections contested in the court of public opinion, parties rush to make their 15 minutes count.

Uttarakhand chief minister Tirath Singh Rawat, a previously low-profile politician, has consistently been the face of sensational headlines and public outrage ever since he raised public concern over the cultural impact of women who wear ripped jeans.

Hundreds of tweets and an organised protest later, he has become the subject of national conversation.

Rawat’s claim to fame is not his unforeseen rise to head of a government, but his controversial remarks on distressed jeans mere days after his appointment. Although derogatory, his remarks should not be seen in isolation.

2021 is a significant year for the Bharatiya Janata Party’s expansionist agenda. With its popularity rising in the east, the West Bengal polls could prove a watershed moment in the state’s predominantly leftist history. The BJP is also contesting elections in Tamil Nadu and Kerala, states where it has so far failed to gain the larger public support.

The surprising nomination of Tirath Singh Rawat needs to be analysed against the backdrop of three elements.

Dubbed by commentators as “the surprise successor”, the 56 year old was not a controversial figure before March 2021, despite having held several public offices in the past. Several party MLAs from the state came forward to express their shock over the decision made by the party’s central leadership, which chose Rawat bypassing several ranking ministers such as Ramesh Pokhriyal Nishank and Dhan Singh Rawat.

Second, it is hard to miss the absurdity of the appointed chief minister’s remarks. Whether raging at the 200 year long American occupation of India, or telling women to produce more children if they wish to better feed their families, the timing and sequence of the politician’s very public faux pas could be seen as a mere tactic to keep his party relevant in the run up to three important elections.

Indeed, the chief minister dipped his toe in the pool of controversy not once but thrice, in descending order of popularity.

This election incentivised controversy is the latest in the series of the BJP’s polarising politics. The party’s majoritarian agenda and this-vs-that narrative has sealed landslide victories in the past. With its theme of Hindu Nationalism the BJP is known cater to a more conservative crowd, making Rawat’s remarks less damaging to their own vote base. And while reinforcing a sexist rhetoric may temporarily raise concerns about individual credibility, it does not usually carry a lasting political impact on the individual or the party.

In the run up to the 2017 Uttar Pradesh election, the internet expressed its concern about politician Yogi Adityanath’s religiously motivated attacks on Shahrukh Khan, and alleged sexist comments made during campaigning. Six months later his party took the reins of government and he was sworn in to head it.

Nor has the Bharatiya Janata Party’s comfortably ambiguous stand on women empowerment deterred its dedicated vote base of women. Tirath Rawat supplies a temporary surge of fame for a party contesting crucial elections this year.

The opposition’s unsuccessful attempt to enterprise on the opportunity is reflected in their failure to garner widespread media coverage. Smear campaigns organised by the Congress party range from organised protests to individual demands for resignation, none of which have come to fruition. While Twitter had a field day critiquing the CM’s public remarks, the criticism is less likely to have a lasting political impact, as history suggests.

With his face plastered across all major news outlets, Tirath Rawat has truly emerged the winner of this controversy. His comments have gotten him extensive coverage and put the Bharatiya Janata Party in the limelight.

The use of derogatory remarks to garner attention debunks the “good publicity” hypothesis. Although parties spend millions or more campaigning, a carefully crafted remark can help them not only consolidate their vote base but shoot to popularity overnight.

While the intent behind public threats or derogatory comments can’t be accurately gauged each time, it is undeniable that slurs and threats often serve as a form of publicity for parties.

Recently, the Trinamool Congress MLA Hamidul Rahman publicly threatened voters by promising that those who don’t vote for his party would be dealt with after the polls. Very similar threats issued from another MLA of the same party, Tapan Dasgupta.

TMC MP Kalyan Banerjee too publicly expressed his confidence in the fact that Sita would have met the same fate as the Hathras rape victim had she been kidnapped not by Ravan but one of his disciples. The comment sparked its expected share of controversy and resulted in an FIR.

But the decision whether to try such ministers as rogue politicians or as planned acts in the theatre of campaigning relies solely upon public perception.

Such comments often supplement a party narrative. The Bharatiya Janata Party has effectively presented an ambiguous front on crucial issues to cultivate support from both sides of an aisle while passively pandering to Hindu patriarchal values. The scattered presence of minority faces is confused for inclusivity by its public.

The chaos also churned up election-driven conditional support for feminism across parties. Politicians, claiming to be heralds of equality, came forward to express their alleged frustration over Rawat’s derogatory remarks.

Yet the fact remains that ministers such as Tirath Rawat help forward the party narrative without jeopardising its vote base at large. With the next election cycle inching closer, it remains to be seen if a surge in negative press has any bearing on the BJP’s predicted vote share. 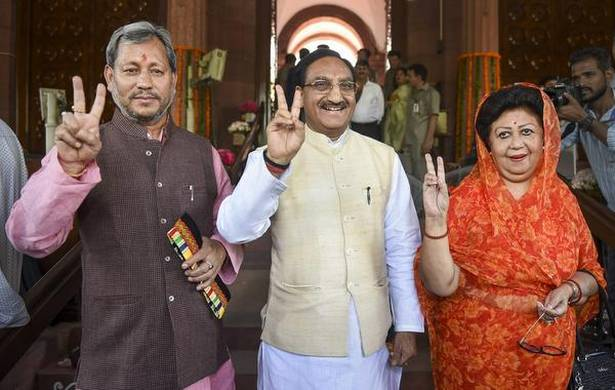