Government to take a decision

Ever since Sonu Sood started his campaign for cancellation of the CBSE exams scheduled to begin on May 4, over one lakh students and parents have made #cancelcbseboardexams2021 trend on the social media in a big way.

But will the government listen or will it remain adamant as it did when a similar demand was raised on the social media during the JEE examinations led by none other than Subramanian Swamy who promised to speak to the Prime Ministers Office. Wiser by that promise he has maintained a conspicuous silence this time.

This time around it involves children. Around 18 lakhs children appeared for the X th Board and a little over 11 lakhs for the Class XII Board in 2020.And these are figures of only the CBSE aspirants. Add to this the ICSE students and the the figures would be staggering.

This time the most distressing signal is emanating from the Ministry of Health that the new virus is afflicting a lot of children including those under 5. In Covid -19 it was mostly adults over 60 who were at risk.

The figures from the Ministry say that between March 1 and April 4 this year, a total of 79,688 children have been afflicted in only the five worst affected states of Maharashtra, Chhatisgarh, Karnataka, Uttar Pradesh, and Delhi.Of these 9,882 are under 5 years, according to NDTV.

The problem is further complicated by the fact that as of now the Corona vaccine is reserved only for those above 45 years, putting these children as the most vulnerable sections of the population.

The only effective drug for treatment of theCorona virus, Remdesivir has vanished from the market and is selling in black.

In view of these facts a lot of parents and teachers we spoke to were categorical that they would rather let their children waste one year than take the risk of exposing them to the new strain of virus, about which there is very little information available.

Several senior teachers from Delhi, Aligarh, Noida and Varanasi we spoke to were categorical that though the Board exams for Class XII were a must because they would mark their entry to higher studies, the Ministry of Education could easily cancel the exams for Class X.

Said a Vice Principal from Central Delhi,"We have already conducted two offline pre-board exams and one on-line exam for Class X students and are ready with their averages. After all the X Board exams are sort of internal, because they have to continue in the same school and join Class XI.

And then she confided,"Please don't take my name but we are expecting an announcement in a day or two that the X Board exams will be cancelled. That would save the botheration of making arrangements for over 18 lakh students because that is the number that appeared in the 2020 Class X Boards."

Shalini from Ghazabad who teaches in a government school in Noida concurred." We know it is an unexpected situation for the government but the least they can do is cancel the Class X exams. The children have already learnt what that they could in the last two months having gone through two online and one off line Pre Board exams. They should be promoted to Class 11 on the basis of this."

Maharashtra has already declared a 15 day lockdown starting today due to the rising Corona cases. How does the CBSE expect these students to reach the examination centres?

Plus, there can't be different rules for different states.In Uttar Pradesh, the board exams for class 10 and class 12 candidates have been postponed because of the panchayat polls in the state. Earlier,the UP board class 10 class 12 exams were scheduled to commence from April 24, 2021. As per the revised timetable, the board exams will now take place from May 8, 2021 to May 28, 2021.

A formal decision regarding the Maharashtra HSC and SSC board exams will be taken and announced by the end of this week.

Maharashtra has been so far the worst Covid affected state. The Maharashtra HSC exams for class 12 board exam candidates were scheduled to begin from April 23, 2021 and end on May 21, 2021. On the other hand, the SSC board theory exams for class 10 are scheduled to take place from April 29, 2021 to May 20, 2021. The exams will be on the offline mode.

The Maharashtra Board has also written to CBSE, ICSE, IB, Cambridge boards, requesting them to reconsider conducting their exams in May.

As of now the Education Ministry seems adamant in asking for the thumb of Eklavya.

The latest directive from CBSE about practical exams reads,"If any candidate is absent in practical because of Covid positive or any family member reported positive the school will conduct the practical exams of such candidates at an appropriate time in consultation with the concerned regional office but latest by June 11."

Are there lessons to be learnt from other countries?Is there no option but for a Board exam for Class XII as is be great made out?

Norway for instance, had cancelled all exams for 10 th grade(final year) students in junior high school and for students in all three years of high school last year. But it did not really matter because exam marks account for only 20 per cent of the total.

In the US the SAT exams were cancelled in 2020 and now most universities are adjusting their admission policies to make these tests optional.

Similarly the International Baccalaureate examinations were not held last year and students were given a Diploma or Certificate "based on the students coursework and the established assessment expertise, rigour and quality control already built into the program."

Some exams are going on in a modified form. For instance, in the United Kingdom the sixth year medical school students took their exam online for the first time.

In the UK experiment with medical students they were asked to answer 150 questions in three hours. Even though the exam was in open book format it was presumed that finding answers to 150 questions would be impossible unless the student knew where to look for the answer.

Our question setters would have to invent some more ingenuity to test the ability of their students in days to come as the online mode seems to be the safest, at least till we take control of the new virus and are able to get over the current crisis. 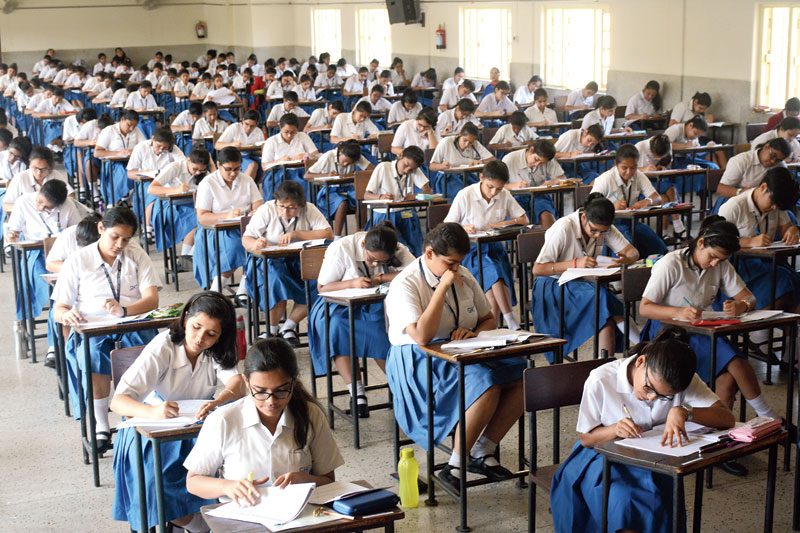