The just concluded assembly elections presented a set of narratives: of a gritty battle a beleaguered wheel chair borne Mamata Banerjee fought in West Bengal, or a son rose out of the shadows of his legendary father to claim his own rightful political space in Tamil Nadu, or a septuagenarian doggedly fighting on even as he continued to battle the surging covid waves in Kerala.

These were the stories of how the human spirit triumphs against all odds if the intention is right and the will is strong. But alongside, there was also the other narrative of how the Grand Old Congress Party has completely lost relevance in the opposition space, and how it continues to be caught in its death spiral, with no evidence of a will to fight back.

When the five state assembly results started unfolding, a senior Congress leader, who is one of the group of 23 rebels who had flagged serious leadership crisis issues last year, rued that the party leadership had decided to run the party into the ground, and put it in a 16 feet grave from which it can never crawl out.

The reason for the dismay: the party failed to open its account in West Bengal; failed to wrest power from the LDF in Kerala, a first in over five decades; failed to dislodge the BJP in Assam despite the emotive NRC/CAA issue, where it had been the ruling party for decades till 2016; and handed over Puducherry, where it was the ruling party till recently, to BJP ( in alliance with other regional parties).

The heart burn among senior Congress leaders was more striking for Kerala and Assam. West Bengal, which had witnessed a highly polarized TMC Vs BJP contest, did not hurt so much because the party had reconciled itself to being a fringe player. Besides, the Congress and Left parties had tactically made it a bi-polar contest in West Bengal by taking a back seat, in order to defeat the BJP.

But Kerala hurt. This was the state which had given the Congress a beacon of hope in an otherwise depressing 2019 verdict: the party had won 19 out of 20 Lok sabha seats in Kerala, including Waynad from where Rahul Gandhi had contested. The state has had a consistent trend of alternating between the LDF and UDF, but this time the voters in Kerala bucked this trend and decisively returned the LDF to power in an unprecedented outcome.

Similarly, Assam, which had been a Congress bastion where Tarun Gogoi ruled for a record three terms till 2016, was expected to bring cheer to the Congress camp. All the more so because the Gandhi scions had run a highly emotive campaign here on NRC/CAA, hoping the voters would lap them up. This was, however, not to be.

To be fair, it is not as if the party has been decimated in Kerala or Assam, like West Bengal. But the fact that voters have decisively rejected the party could not have been more stark. In Kerala, the Congress party, which leads the UDF, along with IUML, had contested on 93 seats, but it could win only 21 seats, notching up a strike rate of 22.6 per cent.

Even its ally, the IUML fared better, winning 16 out of 27 seats in contested, which meant a strike rate of 55.6 percent. The Congress performance was more or less the same as in 2016 when it had won 22 seats.

But pitted against the stellar performance of the Left parties, the Congress performance paled into insignificance. The CPM, which contested 77 seats, won 62, meaning getting a strike rate of 80.5 percent. The CPI won 17 out of 24 seats it contested, which translates to a strike rate of 70.8 percent. The outright rejection of the Congress party becomes even more significant because here the numero uno, Rahul Gandhi, had campaigned vigorously. Senior Congress leaders say the party lost all but two seats in Kerala where Rahul Gandhi and Priyanka Gandhi had campaigned.

In Assam, where the Congress had aligned with the Badruddin Ajmal led AIUDF, for the first time ever, the party had hoped to dislodge the BJP riding on a highly emotive NRC/CAA-based campaign. Though the overall performance of the party improved slightly since 2016, it won 52 seats this time against 39 in 2016, still the BJP outsmarted it by co-opting the AGP at the last moment and winning 72 seats, out of the total 126.

What does this say about the state of affairs in the Congress party, which has been seized with a death wish since 2019 Lok sabha election debacle. In 2019, the Congress tally was a measly 52 seats, with its vote share staying at a dismal 19.5 percent, the same as in 2014. The leadership crisis which has gripped the party since then has continued to plague the party in state after state election.

The party’s internal morbidity led to Madhya Pradesh slipping out of its hand. This was a state which the Congress party had won respectably in 2018, but the consistent internal feuding and the leadership’s continued apathy led to Jyotiraditya Scindia walking out with his supporters, resulting into the fall of Kamal Nath government and the return of Shivraj Singh Chauhan led BJP government. The leadership simply kept on looking.

Shortly before this incident, there was the Delhi assembly election in February 2020, where the party drew a complete blank for a second successive time. Total rejection by the voters in a city-state where the party leaders like Sonia Gandhi, Rahul Gandhi and Priyanka Gandhi live and which houses the party headquarter, a zero tally for the second time was like a blot.

But the result was not surprising to neutral observers because the Delhi election was marked by a complete lack of planning at the Congress headquarter. The party had to hurriedly announce a comparatively little known name for the post of state president at the eleventh hour and there was complete lack of coordination at all levels. The party appointed Kirti Azad as its campaign incharge, who had lost his deposit in 2019 Lok sabha election from Dhanbad in Jharkhand and was out of Delhi political scene for a long time. His wife was a candidate in Delhi and could muster only 2.6 percent votes.

The party’s failure at all levels was no wonder reflected in its tally of zero for the second consecutive time. Its vote percentage too plummeted from 9.7 percent in 2015 to an all time low of 4.25 percent in 2020. Out of 66 seats the party contested, its candidates lost their deposits on 63 seats!

Then came the Bihar elections. This was the first election to be held amidst a raging pandemic. The covid mismanagement by the BJP, especially the migrants plight, had given the opposition parties hope that the voters would reject the NDA. The RJD, led by Tejaswi Yadav, had run a spirited campaign, but the mahagathbandhan could garner only 110 seats, with the NDA emerging the winner with 125 seats in the 243 member assembly, and going on to form the government.

The Rashtriya Janata Dal had emerged as the single largest party with 75 seats, with the BJP trailing at 74. Many RJD leaders had then told this writer that had it not been for the Congress party’s poor show, they would have formed the government. The Congress party had contested 70 seats but could win 0nly 19, which meant a strike rate of only 26 percent.

Given the good show by the RJD and Left parties, especially the CPI(ML), it was the Congress which pulled the mahagathbandhan down. This was the first time the Left had joined hands with RJD and Congress. They had contested 29 seats and won 16. The CPI(ML) had won 12 seats, while the CPI and CPM won two each.

“ The issues that we flagged last year, like a drift at the top level and the necessity of having a leadership which is visible and active, has all come true,” a disgruntled senior Congress leader from the group of 23 told this writer. Commenting on the outcome of West Bengal, Kerala, Assam and Puducherry, he said this had proved beyond doubt that the Congress party would continue on a death spiral and the future course of politics will lie outside the fulcrum of Congress party.

“ The next one and half years will see a new politics emerge, whose fulcrum will be outside the Congress party,”a senior leader of the Congress added. According to him, they had tried everything in their capacity to shake the party up and now a point had come when there was no use saying anything because it was not making any impact.

“ The Congress party will now run its death spiral. They (leadership) have decided to run the party into the ground and put it into a 16 feet deep grave from which it can never crawl out,” he said.

This group of 23 has now decided to fully come out into the open, but not immediately. “ Not when people are dying.” According to several members in this group of 23, “ the behen-bhai story is now over. Though Sonia Gandhi still commands respect but she is not functional due to her health reasons and she is horribly incapable of seeing beyond her children.”

“ We now have to devise a way to chalk out a new brand of politics which actually has a democratic machinery to run it, outside the Congress,” party sources said.

This spells trouble for the Congress party which has scheduled its president’s election for June this year . If the only choice is between Rahul and Priyanka, then it could be the beginning of end of Congress as the country now knows the party.

No senior Congress leader was willing to put his neck out officially by commenting on the election outcome, except mouthing homilies like we accept people’s mandate and will introspect. Looks like Prime Minister Narendra Modi is really going to achieve his goal of Congress-mukt bharat, even though his own credibility stands decimated today. 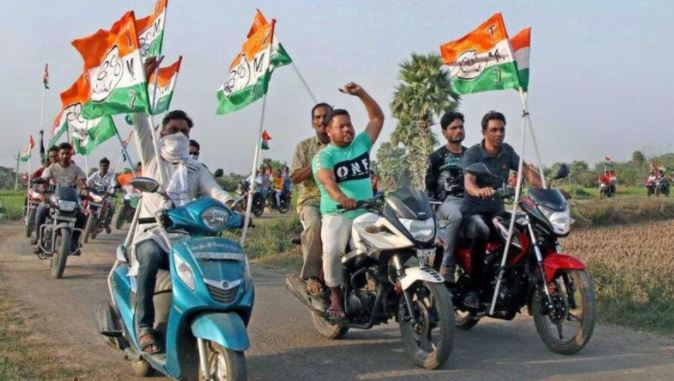