The Night the Nawab was Poisoned

Poisoned chutney, the firangis, and the death of a Nishapur sultan

It was 134 summers ago that the people of Metiabruz chased Langra Munshi with his entire family out of that locality of Calcutta. He vanished forever, never to be heard from again!

Even the omnipotent Kampani Bahadur could not prevent it.

What did the munshi do to so invoke the wrath of people? He was charged with murder of a Nishapur royal!

That was Wajid Ali Shah, ruler of Oudh, exiled to Metiabruz by the Kampani.

At 10 o’clock in the night of September 21, 1887, the king died soon after consuming chutney, a hakimi dawa or medicine, given him by Munsarim ud Daula, the chief wazir looking after the administration of Metiabruz’s Royal Palace.

He was Langra Munshi.

Did not Wajid Ali Shah walk half a mile that day, from his royal palace to the Sibtainabad Imambara in Metiabruz, to mark the second day of Muharram?

Sibtainabad Imambara is back in the news nowadays as the Calcutta Municipal Corporation is undertaking a grand restoration work. It restores our memory to the last day of Wajid Ali Shah.

What officially recorded history remains of his last day?

The question is integrally associated with Langra Munshi, whom Kampani Bahadur or the East India Company helped so greatly that doubts of the British poisoning the chutney come in just automatically.

The descendants of Wajid Ali Shah living at Metiabruz had been claiming generation after generation since 1887 that he was assassinated by Kampani Bahadur using Langra Munshi as the tool.


We don’t have any historical evidence but Langra Munshi was probably from Faras: Persia or Iran. Maybe from Nishapur, as well!

What connection does Nishapur of Fars have with Calcutta?

Strangely enough, the largest number of members of Awadh’s ex-ruling family still live here. Their tryst with Calcutta began with the exile of Nawab Wazir Ali Khan in 1799 and also ended with another case of exile, of Wajid Ali Shah 57 years later.

They were the fourth and the last Nishapur rulers of Oudh respectively. Both were deprived of their lawful Taj, and exiled and imprisoned in Fort William of Calcutta, finally dying in the city.

They, however, were two characters in contrast.

When the Nawab was exiled to Calcutta, some of his close relatives and followers followed him, thus establishing the first link of Oudh with the city. His descendants still live in the metropolis.

Why did Wazir Ali Khan get a life sentence? That is a daring tale to tell! Before that, however, must we not know the strange connection of Nishapur with Calcutta: two regions lying in two far-flung corners of Asia?

Nishapur’s tryst with Oudh began in 1724, when Sadat Khan, a warrior from Persia’s Nishapur established his fief following the Mughals’ decline.

Incidentally, Omar Khaiyyam, the Persian poet who composed the Rubaiyat was born in Nishapur. Call it Mitti ka Asar, the effect of birthplace - Sadat Khan and all his descendants till Wajid Ali Shah, were poets and music lovers.

A man of independent nature, the fourth nawab was the adopted son of Nawab Asaf ud Doula, who had no son of his own.

When he ascended to the throne of Oudh in 1797, Sir John Shore charged him with being disloyal to the Company, and pensioned him off at Sicca Rupees 300,000 annually.

He was replaced by his uncle, Saadat Ali Khan II.

Wazir Ali Khan was exiled to Benaras, with a final conspiracy to shift him to Calcutta so he would not ignite any revolt in Oudh.

On a shivering cold morning on January 14, 1799, a British officer George F. Cherry brought the very hot order that had just come from Calcutta’s Fort William that he would be moved there.

George Cherry invited Wazir Ali Khan to breakfast. The exiled Nawab came with an armed guard. At the breakfast table, he indulged in an argument with Cherry. As the argument reached its climax the ex-Nawab killed Cherry and two more Firangis.

And then the historic Massacre of Benaras followed, proving how daring Wazir Ali Khan really was.

After Cherry’s murder, Wazir Ali Khan gathered his armed Fauj and invaded the home of the Magistrate of Beneras, Samuel Davis. This Firangi was quite a brave man as he defended himself only with a spear.

On hearing Davis had been attacked, the Firangi Fauj rushed to his rescue. The former Nawab was not a Nishapuri to tolerate Shikast so easily. Soon he amassed hundreds of people and rebelled. General Erskine attacked the ex-Nawab and defeated him.

Since it was an agreement between the Jaipur Raj and Kampani Bahadur, protocol had to be honoured. Wazir Ali Khan was brought to Fort William in 1799 and put in an iron cage. He lived in that cage for 17 years.

After his death he was buried at the Qasia Bagan graveyard in Calcutta. Kampani Bahadur spent Sicca Rupees 10 for the burial service of the Nishapur Royal. 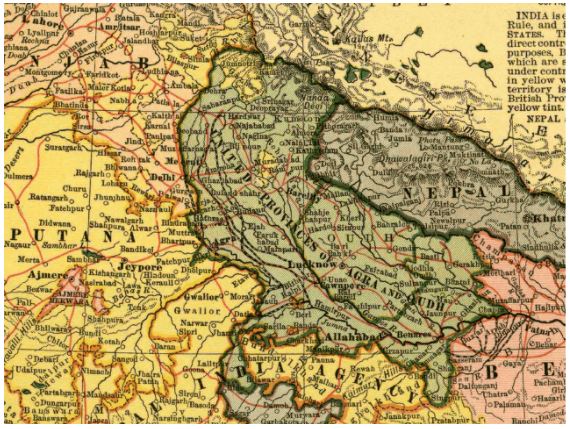 In Oudh’s royal history the most enigmatic villain was Langra Munshi. The shroud over his poisoning of Wajid Ali Shah was never lifted, but some official documents of the British Raj dating back to 1887 throw some light on it.

Though 134 years have elapsed since Langra Munshi allegedly poisoned the Nawab, one still can find old-timers living in and around Sibtainabad Imambara who remember what their fathers told them about this man.

Just a few hours before his death, the Nawab had come to the Imambara.

Even today, this poisoning case is gossiped by people in the bazars adjoining the Sibtainabad Imambara. This made me do a bit of research on it. The whole poisoning story appears like an action packed thriller.

More so due to Langra Munshi’s total disappearance.

In my research, I suddenly found a Firangi, Lt Col W.F. Prideaux, the British “agent” in charge of the affairs of Wajid Ali Shah. This colonel is believed to have woven the poison-plot and also liberally rewarded Langra Munshi.

We will answer, but not before looking at the scene of the hounding of Langra Munshi from Metiabruz.

In 1913, the British Raj prepared a report under the title The Oudh Pension Papers. It gives the scenario of Metiabruz of 1887 immediately after the death of the Nawab.

This report frequently refers to Lt Col Prideaux and the hounding of Langra Munshi by Metiabruz Muslims who mostly were from Lucknow, Sitapur, Kanpur, Faizabad and Banaras. 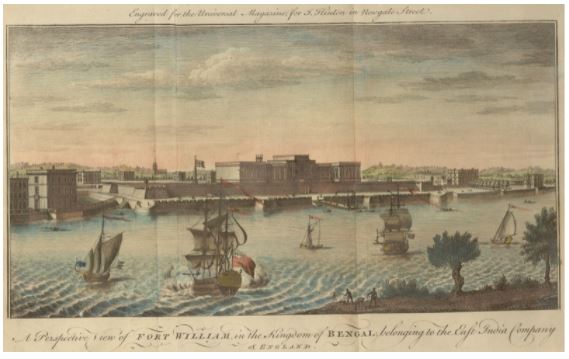 The document says they chanted while Langra Munshi was being ousted: “May God turn you, Langra Munshi, into a leper… may God make you blind… may your children suffer…”

It indicates that he was Wajid Ali Shah’s suspected killer.

Prideaux also wrote in his official report to the Governor General that Langra Munshi could not come out of his house in Metiabruz and that local Moslems were burning his effigies.

After the Nawab’s death, the British Raj very strictly throttled the public voice and media on any reference to poisoning. In Metiabruz it was widely believed the Firangis were behind this poisoning. In 1887, people put two motives behind it:

First, making the huge annual pension of Rs.12,00,000 payable to the Nawab come to an end. His wives and children were to get much less.

Second, the Nawab in Metiabruz and Calcutta had created a massive fan following among the Bengali Bhadrolok (zamindars) and local Muslims. The British feared there would be uprisings in Metiabruz or Oudh due to this.

Earlier, the Nawab was imprisoned at Fort William soon after his arrival in Calcutta. The firangis thought Wajid Ali Shah would not live long. Hence, the annual pension was unlikely to continue for long. But it proved to be otherwise. His pension which began in 1856 continued till 1887.

The British had paid him this amount for 31 long years and wanted to stop it. Now the question was how? The only answer was his death.

Yes! It made sense for the wily Firangis to poison him to death.

After the poisoning, very strict press censorship was imposed, and anyone saying anything in public about poisoning was put in prison. Lt Col Prideaux went all out to save “Saiyid Muhammed Hussein Munsarim ud Doula Bahadur, who belonged to a very respectable family of Oudh and his ancestors were in the service of the State [i.e the Kampani] for several generations…”

Documents left by Prideaux and other related historical papers give graphic descriptions of the night Langra Munshi allegedly poisoned the Nawab.

Prince Anjum Quader of the Oudh royal family also wrote that the Nawab was poisoned by him.

Prince Quader, born in 1922, gave several newspaper interviews in which he said there were hundreds of people in Metiabruz who claimed Wajid Ali Shah had been murdered.

He said his mother, Nawab Mehdi Begum, who lived very close to Wajid Ali Shah’s royal palace the Sultan Khana, had also told him he was killed by the British Raj in a conspiracy to stop his annual pension.

Now, hundreds of articles and books have been written on Wajid Ali yet there hardly is anything about his death by poisoning. It is understandable that during the British Raj nobody dared to raise this question, but this is free India yet nobody flashing a light on it.

The scene of the crime, as per official records, runs like this:

It was late night and Wajid Ali was at the Sultan Khana. The King felt a little tired and his most trusted Hakim from Lucknow Abdul Ali gave him Chutney, a Hakimi Dawa.

After taking the chutney he felt good and demanded hukka from Fateh Makandar, who left the room to prepare it. As Makandar left, Langra Munshi came in with chutney in his hand.

Langra Munshi: “Huzur, if you take chutney again, you will feel your strength return.”

The King took it and immediately started gasping for breath. That very moment, Fateh Makandar came in with the hukka. He raised the alarm. Langra Munshi was standing there.

On realising he may be dying, the King demanded paper and ink as he wanted to write something. But Langra Munshi did not give it to him. He was watching the King, who was fading fast. The poison had already set in.

The King died within minutes! It was 10 PM in the night.

Lt Col Prideaux recommended a life pension of 500 rupees a month for Langra Munshi. Can you believe it, that Firangi also granted the same amount for the 19 princes (sons) of Wajid Ali Shah?

An employee of the Oudh royal family equated with the sons of the King?

The people of Metiabruz hounded Langra Munshi and his family out of the city. And they vanished.

Where? Nobody knows, even after 134 long summers. The British Raj never gave any information on it.

Since the pension was paid to him regularly, the Government must have known it very well where he was living or hiding.

Even today, we do not know anything about the killer! 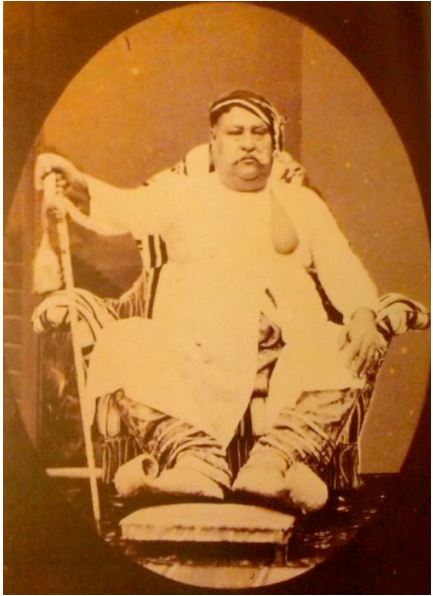