Two prominent leaders of anti-CAA protests formed their own parties

In the recently concluded elections in Assam, it turns out that if the votes of the Congress-led Mahajot alliance and the alliance between the Assam Jatiya Parishad and Raijor Dal were combined they would have been in a position to prevent the BJP forming the government in Assam.

Quite naturally the Congress is blaming the AJP-RD alliance for having split the anti-BJP or secular votes and helped the BJP come to power. To make matters worse, Himanta Biswa Sarma, now chief minister, declared in a television interview in the middle of the elections that his party had encouraged the formation of the AJP-RD alliance to split the anti-Citizenship Amendment Act protestors’ votes.

It is noteworthy that the leaders who formed the AJP and RD, Lurinjyoti Gogoi and Akhil Gogoi, were at the forefront of anti-CAA protests in the state. Akhil Gogoi has been in jail since December 2019 on charges of sedition and under the UAPA for having participated in the anti-CAA agitation, whereas his colleagues booked under similar charges are out on bail.

Although many organisations – including the All Assam Students Union which originally led the movement from 1979 to 1985 on the issue of foreigners’ infiltration into Assam and entered into an Assam Accord with the Rajiv Gandhi government – were protesting against the CAA as it violated the spirit of Assam Accord, it was clearly the alliance of 70 organisations led by Akhil Gogoi’s Krishak Mukti Sangram Samiti which was spearheading the most aggressive protests.

Gogoi, the only leader to be jailed for so long, because of anti-CAA protests had become a real political threat to the BJP government, which seems to be the only possible reason for his continued incarceration. In a letter written from jail last year he had appealled for unity between AASU, Asom Jatiyatabadi Yuba Chatra Parishad, KMSS, Forum against CAA, the civil society of Assam, students, people’s organisations, tribal organisations, national organisations, crusading writers-intellectuals and common citizens of Assam to run a movement capable of bringing the government to its knees.

The Congress party was nowhere in the picture, either in the anti-CAA protests or in attempting to forge any alliance.

The popular sentiment was to see a force capable of dislodging the BJP from power, and Akhil Gogoi was seen as the natural choice for such a movement, being the most prominent face of the anti-CAA protests ever since the Bill was conceived. It would not be an exaggeration to say that the KMSS led alliance of 70 organisations was the avant garde in 2019, just like the AASU during 1979-85. This time AASU joined late with an alliance of 30 groups.

Come the assembly elections, as Gogoi was in jail, the Congress took the lead in calling for an anti-CAA alliance and decided to take the All India United Democratic Front as a partner. This upset Gogoi and he described the AIUDF as a communal party, with which Professor Hiren Gohain, prominent public intellectual of Assam and Gogoi’s longtime mentor and supporter, did not agree, and chose to resign as his party’s advisor. It will be a matter of debate whether the AJP-RD position on the AIUDF was a wise one.

However, instead of blaming the AJP-RD alliance for the Mahajot’s defeat, if Congress had been large hearted and declared Akhil Gogoi the CM candidate of the opposition grand alliance of all non-BJP parties, as he had called for – especially as it didn’t have its own after the demise of three time consecutive CM Tarun Gogoi – the entire dynamics of the electoral battle would have been altered dramatically. It is possible that a number of people who participated in the anti-CAA protests but were convinced to vote for the BJP in the end, would have remained with an alliance whose CM candidate was the most prominent anti-CAA protestor, that too in jail.

Gogoi was initially thinking of contesting from two seats, Sibsagar and Mariani. However, he dropped the idea of contesting from latter essentially because his presence would have divided the anti-BJP votes, which eventually helped the Congress candidate from Mariani to win by a slender margin of 2,446 votes. While Gogoi was considerate towards the Congress, it did not show the same magnanimity in Sibsagar. And we’ve to remember that the Tarun Gogoi government had also put Akhil in jail, making allegations against him of being a Maoist.

Gogoi’s victory in the election from Sibsagar has not gone unnoticed. Himanta Biswa Sarma, his senior in Cotton College, has made a caustic comment that he hopes Akhil will now abide by the Constitution and not resort to unparliamentary politics. The reality is that Akhil has probably fought all his life to uphold constitutional values, and people in power have blatantly violated democratic principles.

Had the Congress shown some imagination it could have trounced the BJP in the same manner as Mamata Banerjee did in West Bengal, and today it could have been on a path of revival and the BJP sunk more in gloom. 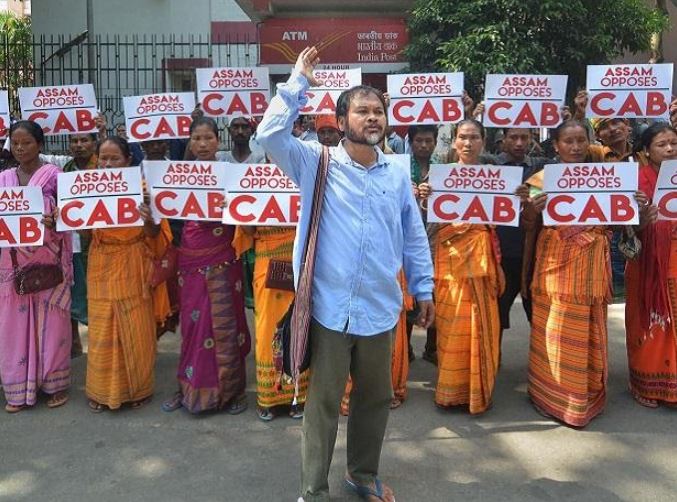