Century Old Mosque Demolished Despite Court Orders, UP Waqf Board To Petition HC

Describing it as a “misuse of power” the Uttar Pradesh Sunni Central Waqf Board (UPSCWB) has decided to approach the High Court demanding a “high level judicial enquiry and action against the guilty officers” for demolishing a 100-year old masjid in tehsil Ram Sanehi Ghat of Barabanki, on May 17, barely 66-kilometres from Lucknow.

The masjid, popularly called Masjid Gharib Nawaaz, stood near the Ram Sanehi Ghat tehsil compound. It was bulldozed despite an Allahabad High Court order of April 24, 2021 that had stated that the masjid should be protected from any eviction or demolition until May 31.

Well before the lapse of the deadline, the police and security services reportedly moved into the area on May 17, cleared the locals, and brought in bulldozers to demolish the masjid ostensibly to clear encroachment.

The debris of the masjid was thrown into the river and security posted to prevent the locals from assembling.

Strongly condemning “the patently illegal and high-handed action” of the Tehsil and District Administration Ramsanehi Ghat, especially the SDM, Chairman of the UPSCWB Zufar Ahmad Faruqi said that it would be approaching the High Court demanding restoration of the masjid, high level judicial enquiry and action against the guilty officers.

The masjid was registered with the UPSCWB making the Board its guardian. Yet it was demolished without intimating the board.

Quoting a local imam and member of the masjid committee, Maulana Abdul Mustafa, a news report said local Muslims were extremely scared to protest and had virtually gone into hiding.

Contesting the presence of the 100-year old masjid the local administration on March 15 issued a “show cause” notice to the Masjid Committee asking it to explain how the building’s location was chosen and alluding to its intention to demolish it on grounds that it was an illegal structure.

The Committee had sent a detailed response attaching documents to prove that the building had an electricity connection since 1959, but the local administration did not take the reply on record.

Mentioning fear of “imminent demolition” the Masjid Committee on March 18 approached the Allahabad High Court and an order was given for the Barabanki administration to file a reply about the grounds on which it had established that the masjid had been illegally built and was obstructing traffic,

In reaction, the local Muslims were reportedly prevented from entering the masjid for the Friday prayers on March 19 causing tension in the area.

Around 35 Muslims who protested were arrested and the police filed cases against them.

The Masjid Committee filed a PIL in the High Court. A division bench of Acting Chief Justice Sanjay Yadav and Justice Prakash Padia in its order of April 24, said, “any orders of eviction, dispossession, or demolition… shall remain in abeyance until 31.05.21”. 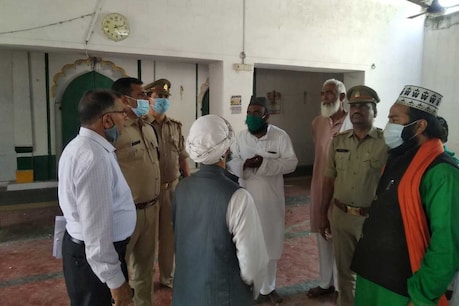