India’s Economy and Its People

The scourge has shattered many lies

On May 31 the National Statistics Office under the Union Ministry of Statistics and Programme Implementation released the official GDP figures for the financial year 2020-21. These say that India’s gross domestic product grew by 1.6% in the January-March quarter of 2021, while it contracted by 7.3% during the entire year.

The Government of India has revised the figures for the second and third quarters. According to the revised data, the contraction in GDP in the July-September quarter has been revised from 7.5% to 7.4% and growth in the October-December quarter from 0.4% to 0.5%.

GDP contraction in the first quarter (April-June 2020) was 24.4%. This contraction in economic growth is the worst in the history of the Indian economy. It has been linked to the lockdown that followed the coronavirus pandemic.

In terms of economic growth, the only ray of hope was agriculture, forestry and fishing which showed growth in all four quarters. The sector grew by 3.1% in the fourth quarter (January-March).

Meanwhile the growth rate of the industrial sector was 3.1% from October to December and 6.9% from January to March. The construction sector grew by 6.5% and 14.5% in the same period.

The performance of the trade, hotel, transport, communications and broadcasting sectors remained disappointing throughout FY21. These sectors recorded a contraction of 7.9% and 2.3% in Q3 and Q4.

In technical terms, India was facing economic recession as the GDP contracted for two successive quarters. Due to the return to growth in the last two quarters of FY21, some institutions are estimating that India’s GDP growth rate will be 8-10% during FY22. But with the second wave of covid and with large numbers of people falling ill and dying, as well as lockdowns in various parts of the country, it is hard to estimate the economic growth rate during FY22.

The rulers, corporations, and government economists propagate the concept of economic growth and economic development as one concept having the same meaning. However, they are two different concepts having different meanings.

Government economists seem to be propagating (beyond their capacity) that economic growth always leads to economic development for the betterment of the people. But we have often seen times when economic growth is accelerating, but disemployment and poverty are rising for the people, their consumption levels are falling, and the economic and other inequalities between the rich and the poor continue to grow. As a result, the living conditions of the common people continue to deteriorate, as we are seeing.

It is because of such a phenomenon that the senior Punjabi journalist Sham Singh Ang-Sang uses the concept of ‘vain economist’ for such economists.

The pandemic has made it clear that humans can survive without cars, bungalows, aeroplanes, phones, and many other expensive items, but without food their very existence is threatened.

In order to sustain human existence, agriculture is necessary, and it is necessary to develop it further. Agriculture in the Third World including India is a major source of livelihood as it provides employment and income to a large number of people, who produce a variety of food items for all people living in any country.

About 50% of India’s population depends on agriculture for their livelihood, but they receive only about 16% of the national income. Many research studies conducted in India reveal the fact that a large number of farmers with marginal or small landholdings, agricultural labourers, and rural small artisans in the country are born into debt and poverty, and live their hard life in debt and poverty, leaving behind a mountain of debt and abject poverty for the coming generations. They either die a death of deprivation or take their own lives when all hopes for their lives are dashed.

This tragic phenomenon continues in a state of despair. In general, the living standards of all the agriculturally dependent sections in the country from different angles are much lower than those of the upper middle income and the extremely rich people.

Of these categories, the condition of marginal and small farmers, agricultural labourers, and rural small artisans is especially poor. In general the two rungs at the bottom of the ladder of agrarian economy – agricultural labourers and rural small artisans, who are more prone to wear and tear and are more likely to be hit on the thighs – are in a very pitiable condition because of their landlessness and dispossession.

These two categories of people have no means of production other than selling their labour. The ever-increasing use of machinery and herbicides, as a result of the adoption of the ‘new agricultural strategy’ package to meet the country’s food needs in the late 1960s has drastically reduced the number of working days in the agricultural sector.

The worst hit are agricultural labourers and rural small artisans. Due to the rapidly declining employment in the agricultural sector and non-availability of employment opportunities in the non-agricultural sectors, their income level is so low that they are compelled to borrow money even to have meals twice a day for their mere survival. Due to their low income levels, their unpaid loans turn into debt, which causes numerous awkward and eventually unbearable problems.

Despite all these facts, the three Acts pushed through Parliament by the Union Government in the field of agriculture would further aggravate the plight of all sections of the agricultural sector, and of consumers in general. This is why for more than six months the country’s farmers, rural labourers and other sections have been struggling in democratic and peaceful ways for the three laws to be repealed, and for a legal guarantee of a Minimum Support Price for crops.

The scourge has shattered many lies, including the propaganda of ‘corporate social responsibility’ which occurs in the absence of any meaningful tax on the wealth or inheritance of the wealthy owners of these corporations.

Gota-Kinari (embroidered edging) looks good only if the Chadar (cloth sheet) to which it is attached is solid and strong. The kind of economic growth that has taken place in India since 1991 to the present day has shown that the Gota-Kinari, the capitalist / corporate world, has become much stronger, but the Chadar, the working people, has not only weakened but is being torn apart. There are not only mines in it, but in it there have been huge mounds.

Economic growth of this sort can be compared to the phrase, ‘Let such gold be in the kiln that eats ears’ – Bhath Pia Sona Jihra Kanan Nu Khave.

Economic and other inequalities have been increasing rapidly as a result of the adoption of corporate economic models around the world over the last 40-45 years.

Even the international financial institutions, which are dominated by the capitalist / corporate world, are now beginning to believe that the eradication of poverty is necessary for the proper functioning of capitalism.

The American Nobel laureate in economics Joseph Stiglitz, the eminent French economist Thomas Piketty, and Democratic senators Bernie Sanders and Elizabeth Warren of the United States of America are pressing public institutions to provide education, healthcare and some other services to improve people’s lives. They are also advocating for increased taxes on rich people.

Our economic growth rate only has to be marginally higher than our population growth rate so that we can reduce the economic and other inequalities in the country while looking after the interest of our future generations.

In order to do so, it is necessary to adopt a pro-people and nature-friendly development model in the country. To this end there is an urgent need to expand and develop the public sector, and to monitor and regulate the private sector.

The importance of the public sector can be gauged from the fact that on May 28 the Punjab and Haryana High Court, while hearing a petition against the privatisation of electricity in Chandigarh, virtually called into question the Central Government’s policy of disinvestment by asserting that privatisation is not a panacea for all ills. The High Court added that the public sector undertakings were created by the Government of India to make a self-sufficient nation and for Indians to become masters of our own destiny.

For true economic development it is important to ensure that the taxes levied on the super rich are increased and collected.

A pro-people and nature-friendly development model will be one in which people’s basic needs - of food, clothing, shelter, education, healthcare, a clean environment, and social security - are met in a respectful manner. 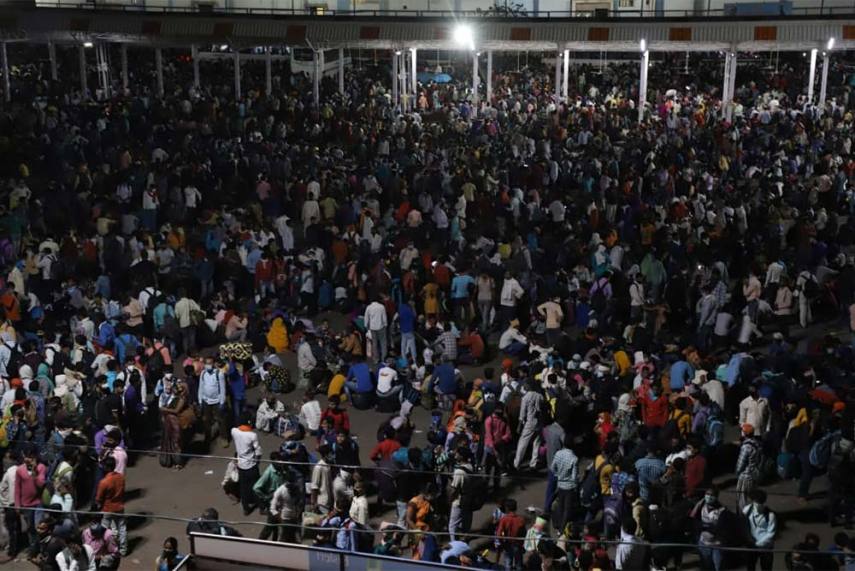