'We Will Return Stronger, With a Bigger and Better Facility to Serve More People'

A Covid relief camp set up by the Hemkunt Foundation in Gurgaon’s Sector 61 was vandalised by a group of men on Thursday morning. Volunteers at the camp alleged that 10-20 men with sticks broke in and damaged furniture, beds and tents. No patients were admitted to the centre at the time. Community Development Director at the Foundation HARTEERATH SINGH speaks to The Citizen about the organisation, its work, and the intimidation now.

Excerpts from the interview:

The Hemkunt Foundation was set up 11 years ago in 2010. For the first three years, we were focused more on education, running three schools in Delhi. After the 2013 Uttarakhand floods, we stepped into the domain of health and disaster management.

The inspiration behind the foundation was to help the people. Our key focus areas are education, healthcare and disaster management. We were working during the first wave of the pandemic as well, this was not anything new.

But, this was all about the timing and also about getting the resources on time. We had predicted the second wave to come and had placed orders for the oxygen cylinders. People started to know about Hemkunt because of the timing of everything. We did not have a plan like “this is when we rise”, it is all happening because of the work we do.

On getting the recognition now:

You have a hundred charities and organizations, we need to do something to stand out. People have started to recognize us after 10 years. We have been continuing to do this work even from before. So, people know us now but they do not know of the hard work that went before. We have done so many projects, like the Kerala foods, our skill development school in Madhya Pradesh, no one knows of all of these projects.

How the facility in Gurugram started:

We started off through a drive-through initially in Gurugram outside our head office but we couldn’t accommodate everyone. We had so many people lining up. So, we realized that we would be needing a bigger facility. We wanted a space that can accommodate everyone. But not everyone was open to offering us a space, especially for Covid patients.

A typical day at the facility

During the peak of the second wave in Delhi, we wouldn’t have the time to even eat our meals. I remember eating my first meal at 6 in the evening and we would sleep for just three to fours in a day. Not just me, but the entire volunteers.

We had patients constantly, be it at 1 pm at night or in the afternoon. We had people coming in auto rickshaws, some even walking for 30 kms, who couldn’t afford to get a hospital bed. Some people even used to come all the way from Meerut or Manesar.

I still remember that there was a person who drove for about 30 odd hours to find a hospital bed and ended up at our centre.

Mental health takes a toll. Some of our volunteers used to cry as well when a patient died. We have seen ambulances dumping people literally saying that we can’t take care of them, you do. So many people used to cry and some even had trouble sleeping at night.

There used to be a pep talk late every night where we would tell everyone that whatever happens focus on the positives. Don’t focus on the deaths that have taken place, focus on the number of lives that you saved. We also take inspiration from the Sikh religion, constantly reminding them of the history and what it teaches us. Seva will always be a priority. All of us came in with a mindset to die that we won’t go home till everyone is fine.

The incident on Thursday morning:

At about 8 am on June 3, some people came into our Gurugram facility and they disconnected the electricity as they knew very well where the generators were. Due to which, the cameras were also disconnected. It was very well-planned. They knew when we end our shifts, when the night shift goes and when the next comes. We had the least number of volunteers then as it was the time to change shifts. They then got in more people at about ten. There were easily 20-30 people with loads of cars and one of them was even armed.

They tore down all the posters and the banners. The volunteers were begging them to not do this, but they did not really listen as they had obviously had their motives. Then, they tore down the tents. The actual damage started at 10 and they didn’t leave the facility until the cops and television cameras came.

That is when the entire scenario changed. They must have thought that these people only do Seva, we would be able to get rid of them. But when they saw the media,they changed their tone entirely. They made statements like if people die, why are you bothered? But when the media came, then the District Commissioner and the Sub-Divisional Magistrate had to come.

The toll of this on you and the team:

I was not particularly too affected by it but the volunteers were. There were people who were crying. Volunteers who had left for their homes for whatever reason, all of them came back when they heard of this. It actually bought us all together. Everything was falling apart, yet we were still eating our dinner together on the ground, without electricity or fans.

I believe in being in Chardi Kala. It is like how a lion takes a few steps back to take a leap. The monsoon was approaching and the structure was obviously not fit for Monsoons. So, if something has happened, it happens for a reason.

Plans for the future:

We will come back stronger with a bigger and a better facility where we can serve more people. We have a few projects in the pipeline which we will reveal soon through our social media channels. We have already found 3-4 places and we are in the process of finalizing it.

The team is afraid, definitely. They do not let me go alone. They make sure that I have at least two more people with me, even if I am going to the head office from the oxygen centre. They are all afraid, not for themselves, but for me.

On getting the community support:

We found the new places because of the people. All our leads were not through our own sources, it is all through Twitter and other messages. We thought that no one would be with us but the number of people who have supported us, even actors and politicians, I was both shocked and happy to see this kind of support. Now, we know that the country is with us. We are here because of the people and after this incident, I am sure that people have our backs. 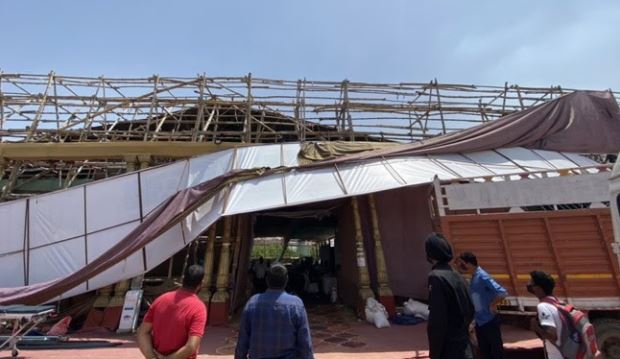