‘The writ of the government is not visible in rural Haryana’

The farmers’ protests that have grown into a countrywide people’s movement took off from Punjab and later spread out to other states. But of late it is Haryana that has become the movement’s nerve centre. Farmers here are taking on the Bharatiya Janata Party–Jannayak Janata Party government in a big way for any ‘anti-people’ moves by representatives or party leaders.

The most recent episode is that of Tohana MLA Devender Singh Babli, compelled by the farmers to tender an apology for using offensive language against farmers during a spat last week. Having accepted his apology, the farmers are now working for the withdrawal of cases registered against their comrades and secure their release.

This follows the victory scored by farmers in Hisar less than a fortnight ago when they compelled the administration to withdraw police cases against some 350 farmers who were booked after a massive demonstration on May 16 against the state government for what they say is its anti-farmer stance.

In Tohana, on June 1 Babli faced protesting farmers who were showing him black flags. He alleged some protestors launched a murderous assault on him, used abusive language and smashed the windscreen of his SUV. The farmers accused him of using expletives against them for which he tendered an apology on June 5.

While it was these episodes that drew the attention of the national media, in Haryana farmers heckling politicians from the ruling dispensation has become a routine of sorts. Farm leaders and veteran observers who have been chronicling developments in the state say a grim scenario is emerging on the ground.

“People read the politicians very well in Haryana and are not ready to be taken for a ride any more. They are tired of the dual talk of the politicians, particularly those from the JJP to which Babli also belongs, and who has spoken in favour of the farmers in public in the past despite being part of the ruling dispensation,” said a senior political observer.

“But the farmers are annoyed that he did not vote against the Manohar Lal Khattar led BJP-JJP coalition government when it came to voting during a no-confidence motion. People think that such leaders are merely throwing their weight around while trying to bargain for plum rewards that come along with power.”

He went on to say that “the situation right now in rural Haryana is that the writ of the government is not visible. The people ask the legislators questions to which they have no answer. They are more annoyed with the JJP leaders since it is a homegrown party that claims to have direct contact with the ground.

“The legislators try to blame the opposition for what is happening. But the question is, where is your political grounding? The opposition will obviously rake up issues to get public support,” he said.

Veteran analyst Balwant Takshak agreed that “these sorts of protests will only increase in the days to come, because there is no government visible on ground zero. Even in areas like Ambala, Yamunanagar etc where the people are said to be less aggressive, the Chief Minister and his colleagues have met with hostilities.

“Leaving aside the BJP cadres, the others who change their stance with the wind are now moving towards the anti-government camp,” Takshak pointed out.

He said the state’s proximity to Delhi, with most of the protest sites at the gates of Delhi lying in Haryana, adds to the high tempo in the state

“One needs to just ask what the farmers are asking for. They are simply saying they do not want the faayda [gains] that the Centre is bent on giving them through these unpopular laws. They want an extension of the MSP [minimum support price] regime to all the crops. The farm sector was the only component that showed growth amid the Covid lockdown and the government is bent on destroying this sector as well,” Takshak told The Citizen.

“They want him to get the three laws withdrawn and see that the MSP is extended to all crops. Similarly, they want Dushyant Singh Chautala, who is the deputy chief minister to exert pressure on the Khattar government, which stands on the JJP’s support, to take decisions in favour of the farmers.

“But what has been happening is quite the opposite, where Khattar has been speaking an anti farmer language while the deputy chief minister’s party continues to support the government,” said Kauth.

Throughout the farmers’ movement, he added, the peasantry has moved ahead in a peaceful manner trying to resolve issues through talks in a democratic manner.

“It is not we who are aggressive. We want Khattar and Chautala to be the advocates of the people before the Centre instead of being their opponents. Is it too much to ask from your own government?” 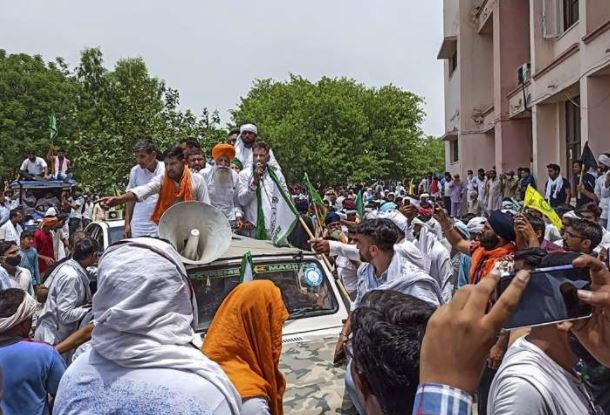