'We teachers shouldn't do such things. I too feel sometimes that I am overreacting.'

PATNA: “Our children are thrown out of government schools and bullied because we are rat-catchers. We are untouchables and many uppercaste people don’t want us to be educated,” says Hariya Mehto, 53, a resident of Ambedkar Colony.

“They beat our children at school and many uppercaste children throw away the books and bags of our children.”

Nearby a rat keeps scurrying over Sudhir Manjhi’s arm before he eventually manages to kill it with repeated blows to the head.

People around the 60 year old applaud him as another rat is now prepared to be served as a meal for the Musahars who live here, some of the poorest people in India.

“It takes only 15-20 minutes to prepare the rat stew. After a rat is killed, we just need to roast it then after peeling off the skin we add spices like red chilli powder, salt, mustard oil and turmeric, and all this is done by hand,” says Manjhi.

Jhunu Ram, 15, a resident of the colony, shares that he was forced to drop out of school and become a ragpicker.

“Once I went to the headmaster to tell him that my classmates were bullying me and calling me muss-marwa [rat-killer]. But he slapped me and said, ‘If they are saying so, then why are you telling me all these things? You are a mouse eater and they are telling the truth, you should accept it,’” says Ram.

Asked about the episode, the headmaster, Sanjay Srivatsav of the S.S High School in Adalatganj said, “We teachers shouldn’t do such things. I too feel sometimes that I am overreacting.”

Srivatsav said that uppercaste dominance in this area was a “big problem”, and that the non-governmental organisation Oxfam was trying to build trust between teachers and children.

There are allegations that the school teachers are biased, and call children from Musahar families “dirty”. Some parents of Bhumihar and Rajpoot families, considered upper castes, do not want Musahar kids to attend the same school as their own. 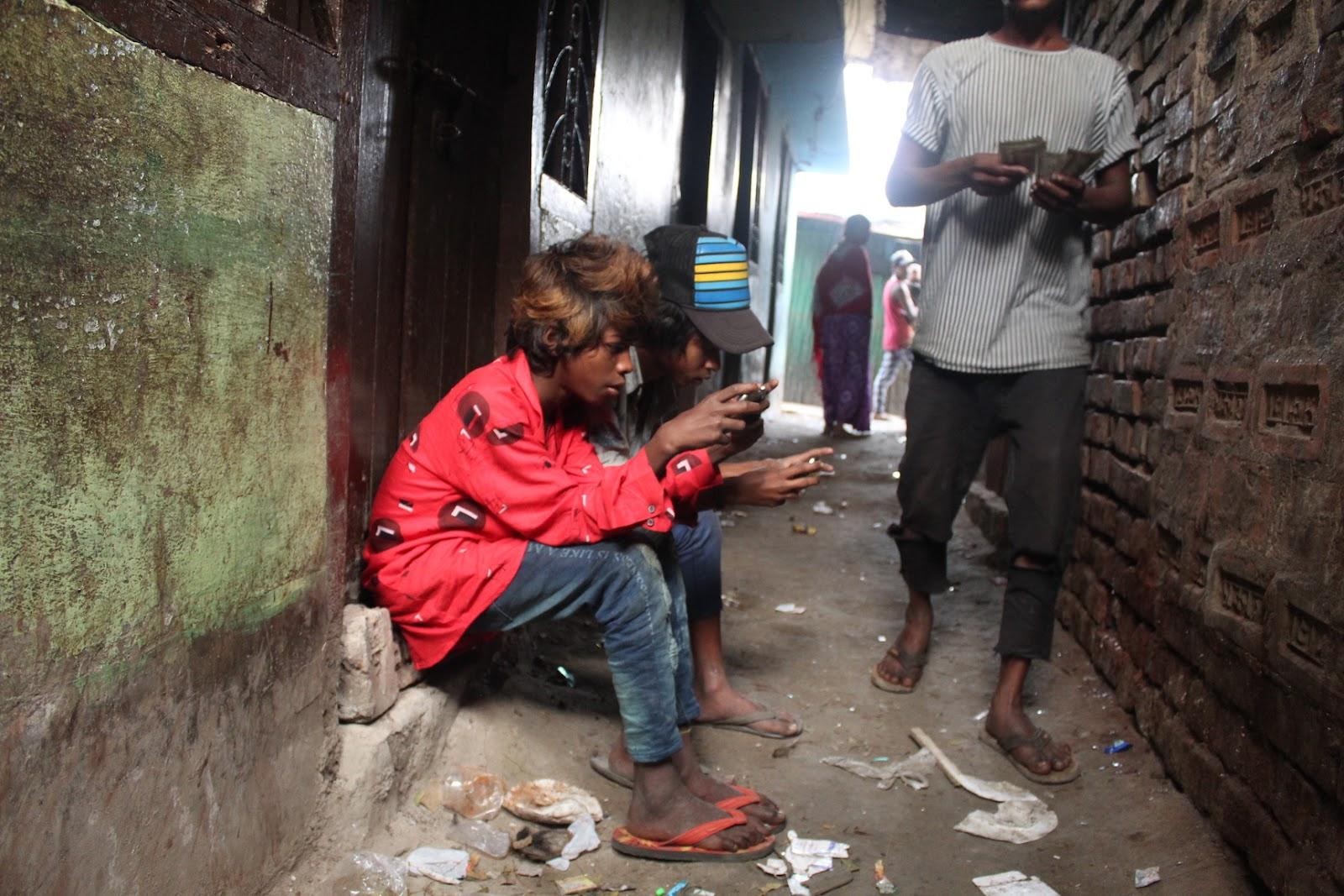 Jhunu Ram with his friend, playing a game on his mobile phone which he bought after working at a restaurant


Asked about the discrimination perpetrated on these children, Arun Kumar Chaudhary (52) speaking on behalf of his ward-councillor wife Shobha Devi (42) said “there are two Dalit communities in this area [Ward 19]. Most of them are ragpickers and they keep fighting with each other.”

“In 2019 I asked the headmaster not to make any derogatory remarks as they all are our children and it’s our duty to educate them and make them well behaved,” said Chaudhary.

He went on to say that he would discuss the problem with the local MLA, Nand Kishore Yadav, and request him to allot a building for a government school to be built near Ambedkar Colony.

The Bihar Legislative Assembly is just 1.2 km away, but the people of Ambedkar Colony say they have no access to any of the government schemes.

“Nothing has changed over time and we are still living as our ancestors used to live. Our next generation is still treated the same as we were. We have nothing proper to live on, our life is dependent on daily wage labour, which we get one day and the other days we just catch rats or go hungry,” said Hariya Mehto.

The government school where children from the slum have been attending classes is 12 km away. It was in June 2019 that some families with support from Oxfam started sending their children there. But, they say, their children were segregated into separate classrooms and the teachers took hardly any classes for them.

Schools are closed now due to the pandemic, but even otherwise, most children here say they don’t want to go to school. They prefer to work someplace with their parents, or as ragpickers because their parents don’t have a regular job.

Not welcome in school, these children are exploited at their workplace too and they end up smoking or consuming drugs, Mehto said. 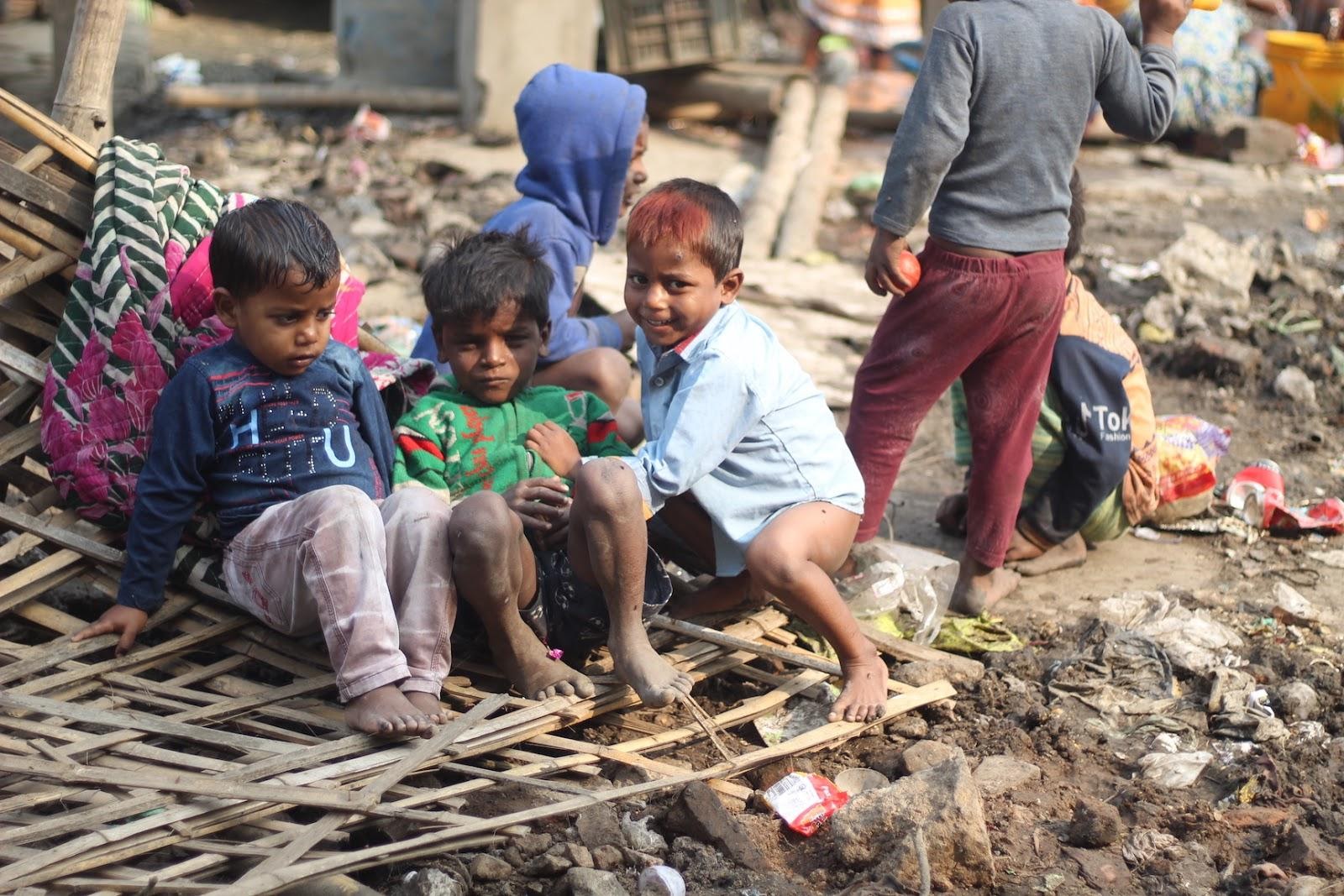 Children of ragpickers in Ambedkar Colony, playing on a heap of garbage because they were bullied at the only government school for them, which is 12 km distant


Despite financial problems, some families send their children to a private school. Papu Manjhi, 40, says he sends his two kids to the AVN English School nearby. “We don’t need to fear discrimination because teachers in that school are open-minded and they understand our situation.”

There is still a ray of hope for the children here. Sailesh Jha, 52, a nodal officer in the state government’s Rural Works Department, visits the slum after his office work at 5 pm and teaches them till 9.

“One day I came here to distribute some woollen clothes, and saw these kids collecting glass bottles and playing on a heap of garbage. I spoke to their parents and after listening to their problems, I decided to take tuition. Most of them now know how to write and spell their names.”

It is some progress but there is a long way to go, said Jha.

People of the colony say they are happy with his initiative because they don’t have to pay tuition fees, adding that he is a good man.

Jha also pointed out the threats to the children’s health. “The area where they live is like a garbage dumpyard. Children are exposed to dangerous diseases including cholera, typhoid, tuberculosis and jaundice.”

According to the State Mahadalit Commission’s interim report, nearly 22 lakh Biharis are Musahars, of whom 96% are landless and 92.5% work as farm labourers.

Raised caste Hindus still perpetrate untouchability on them, and as a result only 9.8% of Musahars are literate - the lowest proportion among Dalit castes.

It was in 2014 that India got its first ever Musahar chief minister, and at the time Jitan Ram Manjhi had said, “Nothing but education can change our lives and future”.

Nothing has changed so far.

According to Santosh Jha, a professor of political science at Patna University, “Today Musahars are largely concentrated in southern Bihar and Jharkhand. They mainly work as landless labourers but with no mentor for guidance, as they have no belongings.”

“Musahars are traditionally nomads and they are not habitants of any one particular region. But, over the years they have started coming together as one strong social unit,” said Jha.


Before 2007 the Musahars were predominantly clubbed with other Dalit castes and the politics of Bihar continued to revolve around six main communities: the Hindu forward castes, Yadavs, OBCs, Dalits, and Muslims.

That year, chief minister Nitish Kumar divided the OBCs into Mahadalits or extremely oppressed castes, and other Dalit castes. Since then, Musahars have been considered Mahadalits.

Unlike Chamars in Uttar Pradesh or Paswans in Bihar, however, they have never been an organised group. Demographically dispersed, they remain politically sidelined.

Bihar meanwhile spends only about 3.7% of its GSDP on elementary education.

A performance audit report by the CAG tabled in Parliament in 2017 found that the state government had been unable to utilise over Rs 26,500 crore from the Right to Education corpus in the five years prior.

Many people continue to stigmatise Musahars, even claiming that they are “witch-hunters”. All claims of uplifting them and undoing their oppression are only heard during election time. The community is being kept behind.