Safoora Zargar met Natasha Narwal and Devangana Kalita for the first time in jail. They were her source of information of the outside and she became their comfort inside.

They used to spend a lot of time together, sharing their anxieties, hopes, struggles, chances of getting bail.

Safoora Zargar, an activist arrested under the Unlawful Activities Prevention Act (UAPA), who was three months pregnant at the time of her arrest, got her bail on 23 June 2020 on health grounds.

Natasha Narwal and Devangana Kalita, students at Jawaharlal Nehru University and members of a feminist organization Pinjra Tod, had to wait a year more for their bail.

On June 15, a division bench of Justices Sidharth Mridul and Anup Jairam Bhambhani of the Delhi High Court granted them bail. Alongside them, Asif Iqbal Tanha, a student at the Jamia Millia Islamia, also arrested under the UAPA in connection with the Delhi riots, also made bail.

The High Court bench noted that they have found "absolutely nothing" in the charge-sheet through which they could prove that the two accused were related to any 'terrorist act' or an act of 'raising funds' to commit a terrorist act.

Along with this, the Court raised several fundamental issues over the right to protest and the use of UAPA to stifle dissent. The Court mentioned that “the right to protest is not outlawed and cannot be termed as a 'terrorist act' within the meaning of the UAPA.”

The strong-worded judgment calls out the state over the use of UAPA to stifle any sort of dissent.

"It has been a recurrent theme, repeatedly urged by the State, that what was contemplated and in fact brought to fruition was not a typical protest but an aggravated protest which was intended to disrupt the life of the community in Delhi. We find ourselves unpersuaded and unconvinced with this submission since we find it is not founded on any specific factual allegation and we are of the view that the mere use of alarming and hyperbolic verbiage in the subject charge-sheet will not convince us otherwise," the judgement said.

It is precisely this “strong and landmark judgment” that worries Akash Bhattacharya, Natasha Narwal’s friend and also a professor at the Azim Premji University.

Hours after this judgement, the Delhi Police’s PRO has reportedly said that they are not happy with the judgement and would file a “Special Leave Petition before the Hon’ble Supreme Court of India”.

Akash who has been in touch with her family post the judgement said that the family is waiting for the Supreme Court’s decision as it can go both ways. Savita Pradhan, Natasha’s aunt called him and also expressed the same combination of fear and hope.

Akash, who has known Natasha for the past five to six years, recalls the sheer strength and dignity she carried herself when she was out with for an interim bail after the demise of her father due to Covid-19.

“The way she, her family and her friends handled the situation was quite inspiring. She was being strong; dealing with the situation as level-headed a manner as possible, given the circumstances,” he said.

Supriya Kumar, a young member of Pinjra Tod, remembers Natasha’s father fondly. He was in constant touch with the members of the group and he wanted them to come and meet him.

“I don't know how to articulate that feeling of his death. He was someone who was constantly involved even though we could see a little bit of fatigue but just to know that this man has constantly been on Natasha's side. A lot of us don't come from families who support us with something like this and it's really unfortunate that he couldn't see this day when she got bail,” Supriya told The Citizen.

Supriya always looked up to the two of them and remembers how they always made her feel welcomed and involved.

During one sit-in performance, Supriya remembers, that Natasha had dragged her to the stage when some performers were late and sang ‘Tu Zinda Hai’ with her. This is her favourite memory of Natasha.

After one year of their arrest, Pinjra Tod released a statement that urged the authorities to release all political prisoners. In the statement, they had given some excerpts of the letters Natasha and Devangana had written to their friends.

One letter by Devangana dated September 2020, reads, “It is women’s defiance and collectively that helped one survive ‘outside’, it is the same that is crucial to surviving‘inside’, in jail... Every day I draw strength from the women who have been here for many years, women who have no one ‘outside’, who are endlessly waiting through long trials, women who are from far away countries and don’t even speak English or Hindi, women who have delivered their babies here and bring them up here, women who do not have money to hire lawyers and patiently negotiate the arduous process of the government legal aid system, women who have not spoken to anyone in their families for months because they just cannot remember or find a contact number and no one responds to their letters ‘home’, women who are as much ‘criminals’ as prisoners of structural oppressions."

Many friends, like Akash and Supriya, are awaiting the release of the two girls. One person who is waiting for them the most, is their roommate, Vikram Aditya Sahai.

The day Natasha and Devangana were picked up, May 23 2020, they were all preparing to enjoy a nice dinner and a cake to celebrate Vikram’s grandmother’s birthday. The news of their arrest came as a shock.

“One misses Devangana around the dinner table because she really enjoys food. Every time we have good food we miss her and Natasha's particular playlist that she starts playing at like 2:30 AM in the morning. There is no word for how one eats their food and listens to their music,” Vikram told The Citizen.

Vikram hopes to spend time with the both of them upon their release’ to be able to “hold each other, eat with each other, and when we would wake up maybe sing songs.”

The friend hopes that they are released soon so that they can enjoy their normal lives again.

Not just friends, but fellow activists are also hoping for their release.

Apeksha Priyadarshani, a JNU student, remembers meeting Natasha and Devangana at various protests across universities in Delhi. She particularly remembers the work that their organization had done at Hauz Rani.

“These women were part of the day-to-day lives of the people. They connected with the children and the women and made them feel included. This requires a certain level of patience and resilience, which they had,” she told The Citizen.

Hearing about the arrests of young girls who engage in protests, Apeksha, an activist herself, sometimes feels scared too.

“Of course, I fear sometimes. Fear is the consequence of speaking up. But there is no other option. If you decide you won’t speak today, tomorrow a decision would come that would restrict your freedom. Thus, there is a need to balance things,” she said.

Apeksha, who has been in touch with Umar Khalid, another activist in jail under the UAPA, is hopeful for his release, post this judgement.

“It is not unexpected that the Delhi Police will go to the Supreme Court. But today’s judgement addresses a lot of issues. We are hopeful,” she said.

The Delhi High Court hours after passing the judgement have deferred the orders of their “immediate release” as they are waiting for the verification of their addresses and sureties.

The Court has asked for a verification report by the Delhi Police as soon as possible, preferably by 1 PM on June 16. 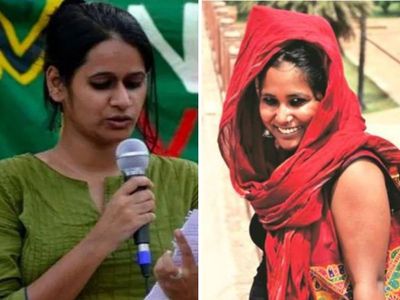