‘My God is better than your God’

The first thing I see every morning when I step out for my walk, some would say at the unearthly hour of 5:15 am, apart from the guards and the milkmen, is a bunch of women ‘stealing’ flowers from various private ground floor garden spaces and a few from the society garden that is tended to very diligently by the hired gardeners.

Some are quite blasé and continue with the plucking, while one or two look away quickly with embarrassment or mumble, “Offerings for our prayers!” I once retorted back with a “Your God will not be mollified with stolen offerings! Tch! Tch!” This left them aghast with incredulous looks and sneers. What audacity on my part to even say such a thing! But a few residents and gardeners heard of the incident and were thrilled that the silent-thieves had got a ticking off.

This set my mind spiralling off in various directions… Including the chants here and there that reach a painful crescendo these days on how: My God is better than your God etc. etc. In the same vein, have you noticed lately how in India the paradoxical and complex relationship of religion and politics in our multi-religious society has led to the complicated ways in which women's activism has both reinforced and challenged their gender identities?

It is also clear as daylight to see the approach and strategies of influential political parties, women's organisations and women's groups towards legal reform and the contested issue of a uniform civil code. Unfortunately, in the current communal conjuncture, even though reform within personal laws or feminism is the best strategy for enhancing the scope of women's rights, such an approach tends to freeze identities within religious boundaries. It shows how women and minority rights are used within the politics of religion to side-line the agenda of women's rights.

Our country has always been stated as a secular country. But it has also been observed that secularism is used to gain political mileage. It is largely understood now (other than those that obfuscate) that the current government is destroying national unity. The nation is eternal, and carries within it the history and traditions of the community, including religious faith. The primary goal of a secular state is to ensure trust between religious communities.

A secular state is expected to protect minorities from majority domination, and possesses a respect for all religions. A secular state must also inhibit and regulate the continuing attempt by the high priests of religion to impose their views and norms on ordinary men and women.

The strength of Indian secularism—its defence of minority rights—is easily made to appear as its weakness and the burden of its defence, rather than be shared by all citizens.

The politicisation of religion largely depends on how the state interacts with religious communities. If communities’ cultures matter, then the state upholds their rights, gives them some form of religious autonomy, and provides freedom from discrimination.

A government that sees people as members of a community first, and as individuals second; and this is how the present government bases their political theory, is starting off on the wrong foot and only ensuring a downward spiralling effect.

The government, whatever its intentions and desires, is indubitably a political machine. It creates divisions, conflicts, interests, alliances, expectations, frustrations and heightened consciousness just as much as society does. No legislation, or lack of, can constitute neutrality, uniformity, and even-handedness.

The secular state mystique ultimately lets the state off the hook, as it encourages it to blame the (unfortunate) affairs of things entirely on society and not to take responsibility for its own deeds and non-deeds.

On the eve of Independence, India decided to establish a secular state with its own characteristics of religious tolerance, liberty and equality. Religious tolerance is a key element in the concept of Indian secularism because it has been a significant element of the country’s historical tradition.

Secularism in India is a way of life. In a country where there are at least 12 religions, over 300 castes, nearly 4,000 sub-castes, over 100 major languages and more than 300 dialects, the only way to reduce internal tensions is to inculcate tolerance and co-existence. The idea of secularism in a country like India with its pluralist tradition lasting over thousands of years cannot succeed without respecting pluralist ethos.

In India despite partition on the basis of religion, the country resolved to be a secular state and promulgated its Constitution in 1950 accepting equal rights for all citizens irrespective of their caste, creed or race. It was undoubtedly a great step forward. But it was not easy to translate the constitutional ideals into practice in a society as complex as that of India. Secularism in India began to face turbulent weather with the revival and strengthening of religion-leaning political parties in the country.

Suppression of religious minorities has made India visible to the world and not in a good way… It’s time to change that.

* Stay clear of the likes of such… Is my advice to you! 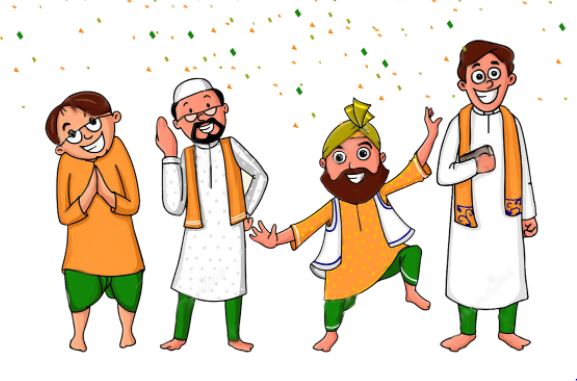