Stark Future for Teachers in Low-Budget Private Schools in Bihar

‘The administration has not paid me a single paisa’

SITAMARHI: Most low-budget private schools in this city haven’t paid salaries to their employees since the beginning of the pandemic, leaving them unsupported amidst an unprecedented crisis.

Media reports of a private play school principal in Patna selling milk at his village market, an English PhD scholar running a chicken shop, and a social science and education postgraduate working on his farmland in the wake of the pandemic reveal the gravity of the lockdowns’ impact on the livelihood of teachers.

The lockdowns have rendered millions of people jobless. Among the worst sufferers are employees of private educational institutions in rural and semirural India.

In the metro cities, top private schools have managed to collect fees from their students, most of whom belong to the affluent class. But contrary to the popular perception that private schools are run on high budgets, the fact is that of roughly 4.5 lakh private schools in the country employing some 82 lakh teaching and non-teaching staff, 80% are ‘low-fee’ schools that charge between Rs.500–2000 as fees.

Interviews with school teachers and management in this district near the Indo-Nepal border situated 135 km from Patna exposed the true suffering of private school staff.

Ram Niwas Pandey, 51, a gold medalist in chemistry taught science to students of class eight and nine at a private school here till February last year. He has not received any salary in the past year.

“The administration has not paid me a single paisa. All 22 teachers of the school were told we would be paid after the school reopened.” Pandey is surviving by borrowing money from relatives.

“The situation is pathetic. I have had to live out of my daughter’s government salary for seven months,” says Vinay Choudhary, 42, who taught English to class 10 students at the Bharti Ucchangal school for a salary of Rs.20,000 a month before the pandemic. In the four months since his school reopened, he has only been getting 40% of his salary.

“Most of the low-income private schools are going through a similar phase,” explains Mohammad Amjad Alam, 52, vice-principal of another low budget school, which had 700 pupils on the rolls till March last year. For two months he has survived on 60% of his salary. Despite these cuts, he says, “Our school management is unable to pay most of the employees any salary since the beginning of the pandemic.”

The majority of private schools in Sitamarhi if not Bihar are on the brink of closure. Only permanent employees of reputed schools like the Dayanand Anglo-Vedic (DAV) School and Delhi Public School chains get a full salary.

A regional-director level officer of the DAV managing committee in Patna, who wished to be unnamed, said the management is giving salary anyhow to the permanent staff across many schools in the districts of Bihar-Jharkhand, from institutional savings like fixed deposits.

But for teachers in low-budget private schools it is virtually the end of the road. 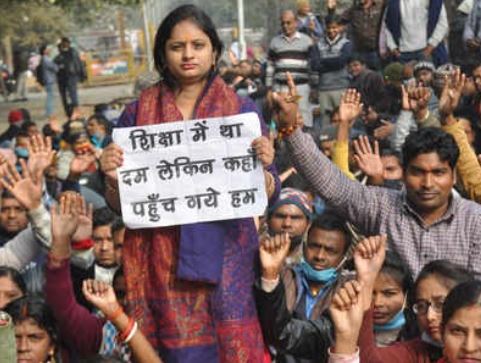