Eight months ahead of the assembly polls, the border state of Punjab stands at a political crossroads. Many surprising developments on the political chessboard of the state can be expected in the days to come. All that remains certain is the widespread anger against the political parties that have been ruling the state for decades.

Space for a third alternative to the Congress and the Shiromani Akali Dal still exists. But is any political force in a position to fill this void?

Interestingly, the issues that were there before the high voltage polls in 2017 remain firmly entrenched. The highly emotive issue of the sacrilege of holy books and the police killing of peaceful protestors seeking justice at Behbal Kalan for desecration of the Guru Granth Sahib at Bargari, along with the police firing at Kotkapura, stand where they were, with the cases yet to reach their logical conclusion.

The menace of drugs continues and so do the issues of disemployment and illegal mining.

But two new phenomena are keeping everyone on tenterhooks. There is first the unprecedented farmers’ movement against the three farm legislations rammed through Parliament by Narendra Modi’s government, with the agitation continuing across Punjab and at the gates of the national capital with farmers from other states.

No one has any inkling as of now which way the farmers will vote. One of the unique aspects of the movement has been that it is led by 32 farmer organisations in the state not all of which see eye to eye, and have been keeping the political parties at a distance, leaving them guessing.

Second is the palpable anger among the masses. Ordinary people continue to feel cheated by the politicians. It remains to be seen how they express this anger on the day of polling.

Coming to the political churning, till a couple of months ago the Captain Amarinder Singh led Congress government seemed to be firmly in the saddle, approaching the forthcoming polls confident of a repeat performance, when it won 77 seats of 117.

But then the Congress did what it does best, scoring several own goals.

The first came when the Punjab and Haryana High Court quashed the investigation carried out by the state in the Kotkapura firing case. It asked the state to reconstitute the special investigation team without IPS officer Kunwar Vijay Pratap Singh, who has since assumed an important stature in state politics.

Kunwar Vijay Pratap was the face of the SIT probing the Behbal Kalan and Kotkapura firings on protestors in 2015. Hailed by many as an ‘upright officer’, he opted for voluntary retirement and has minced no words in attacking the Punjab government’s legal team for not presenting a strong case in the High Court.

The officer was recently inducted into the Aam Aadmi Party by national convener and Delhi chief minister Arvind Kejriwal during a visit to Amritsar.

Of late the Congress culture of infighting and washing its dirty linen in public has also come to the fore. Things went from bad to worse when the government offered jobs to the wards of two MLAs in a move opposed by its own Congress ministers and party leaders.

There has also been a war of words between the Captain and cricketer, celebrity, politician Navjot Singh Sidhu. The two haven’t had the best of relations since Sidhu joined the Congress ahead of the 2017 polls after leaving the BJP, and was later inducted into the Amarinder cabinet.

Meanwhile observers say the Congress high command is ‘meddling’ in the affairs of Punjab in an attempt to ‘cut Amarinder down to size’.

The rookie AAP had threatened to walk away with the crown in 2017 but its performance has gone downhill ever since. It made big gains on new turf to become the main opposition party, winning more seats than the Akalis who are a traditional political powerhouse. But soon enough the number of MLAs dwindled, with some of them recently joining the Congress.

Still many see a possible third alternative in the party. During his recent visit Kejriwal not only inducted the ex-cop Kunwar Vijay Pratap but made the announcement that the party’s chief ministerial candidate would be a popular Sikh face from Punjab. This has led to speculation on who this face could be, with many hinting towards the Sidhu possibility.

“If Sri Guru Granth Sahib ji could not get justice on the land of Punjab then what would be the condition of the common man,” said Kunwar Vijay Pratap at the event.

AAP needs a credible face to lead the party into the poll battle. It also desperately needs to increase its support base in the Doaba and Majha regions of the state, particularly the latter where its presence is negligible. How it manages to do this remains to be seen.

Meanwhile, the Akalis are desperately trying to revive themselves. Their debacle in the last polls on the emotive issues of sacrilege, police firing on peaceful protestors, inability to tackle the drugs menace, rampant corruption, farmer suicides and others has only been compounded on account of their siding with the BJP on several instances as the latter’s ally till earlier this year.

People are angry over the SAD siding with the BJP on the removal of Article 370 governing Jammu and Kashmir, remaining tongue-tied when the BJP leadership was propagating its one-nation-one-language formula, and supporting the controversial ‘black laws’ until it was compelled by public anger to walk out of the alliance.

The Akalis have announced a ‘secular’ alliance with the Bahujan Samaj Party, giving it 20 seats to contest.

“We will also ensure the welfare of the disadvantaged sections of society and farmers besides working to develop the trade and industry to bring the state’s economy back on track,” SAD president Sukhbir Badal said while announcing the alliance.

Many observers see this announcement as opportunistic politics, and questions are being raised about the winnability of many of the seats offered to the BSP. Another pertinent question is whether the votes from BSP cadres can make up for the loss of votes on account of the BJP’s departure.

The BSP’s performance in Punjab assembly polls has consistently been on the decline since 1992 when it won nine seats. The party could never make its presence felt in the state as it did in Uttar Pradesh, despite its founder Kanshi Ram hailing from Ropar district and Punjab having the highest proportion of people from Dalit castes at 32% of the population.

Everyone is eyeing the Dalit votes which have the maximum presence in Doaba and Malwa. The governing Congress too has faced criticism for not giving them just representation.

The BJP stands cornered as of now, mainly on account of the stand of the party’s central leadership on the controversial farm laws. With its alliance with the Akalis a thing of the past, the party has an uphill task making inroads in the rural hinterland while keeping its urban voters, mainly caste Hindus, intact.

It has also been trying to make inroads into the Dalit voter base, but as things stand the BJP will be fighting to retain its presence in Punjab. It had managed to win just three seats in 2017 in alliance with the Akalis, who could only win 15 constituencies. AAP had done better, winning 20 seats. 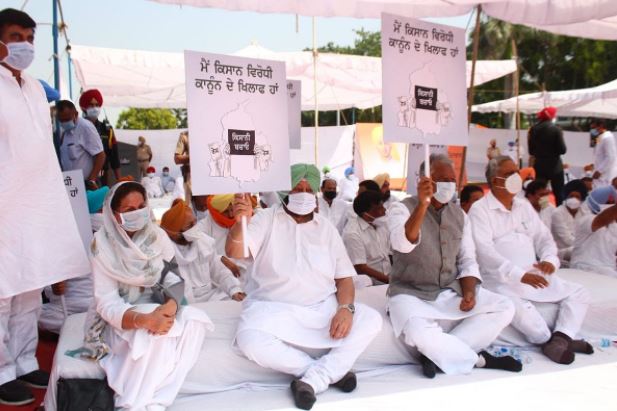