Lockdown Impact on Stray Dogs, Samaritans to the Rescue

Nighat Lone and Dawood Mohammed have become angels in disguise for starving dogs in Srinagar. Lone, who has been working for animal welfare for the past ten years, got her organisation Kashmir Animal Welfare legally registered in 2019.

“My organisation got registered one or two days before the abrogation of Article 370,” says Lone.

Lone, along with her partner San Bandey, carries out the rescue and rehabilitation of small and large animals throughout Jammu and Kashmir.

Their organisation did not carry out many feeding drives, until stray dogs in the city started starving to death after the harsh lockdown imposed due to the pandemic.

“We were not much into feeding earlier, we only focused on rescuing and rehabilitation. After the lockdown we realised that they are not getting any food out on the roads,” she said.

The current lockdown has restricted movement in the city, leaving no source of food for stray dogs and cats.

“We started a feeding drive on the first day of the lockdown,” says Lone. The organisation mostly covers the city centres, as most of the human footfall used to be there before the lockdown. “A majority of tourists also went there.”

There are also several shopping complexes in the central part of Srinagar, consisting of prominent areas such as Lal Chowk, Batamaloo and Mehjoor Nagar.

Lone thinks that in the residential colonies, stray dogs are still getting food through the waste disposed of by local residents, but those in the city centre are the most vulnerable.

Because of the pandemic, all restaurants, hotels and local food stalls are shut, making it necessary for her organisation to feed these animals. “Otherwise, they will die.”

The office of Kashmir Animal Welfare is situated in Srinagar but the organisation has volunteered in other districts of the erstwhile state as well.

“We have our offices in Baramulla, Anantnag and Ganderbal as well, and we cover mostly the market areas situated in these districts. At present the organisation has groups of 10-20 people in every district feeding and rescuing abandoned animals. We supply food to all the volunteers and then they start the feeding drive,” she explains.

Lone shared that her organisation has not got any support from the government authorities so far. This despite the fact that “Kashmir Animal Welfare is the only organisation for animal welfare in Kashmir. There is no other such organisation here.”

She says the organisation does not have enough space to keep its rescues, and lacks essential facilities like an x-ray machine.

A space crunch is not the only problem faced by her organisation. Its volunteers have also faced threats and harassment at the hands of police officials. “Police used to stop us at many places but now we have arranged curfew passes for ourselves,” she says.

She says that because of political disturbances, animal welfare has long been neglected in J&K.

Kashmir Animal Welfare also rescues other animals such as injured horses abandoned by Bakarwals on the streets of Srinagar.

Lone recalls that she was keen to help animals even at the age of 14. She received plenty of support from her parents, resulting in more strenuous efforts from her side to work for the welfare of other animals.

She says that if a living being dies hungry in front of one’s house, then the owner of the house will be held accountable by God.

Another organisation working in this field is Healing Pat, run by Dawood Mohammed of Srinagar to rescue dogs suffering from skin diseases and other ailments.

“We go around the city, looking at groups of dogs to see if there is any dog in pain,” Mohammed explains. The sole objective of his organisation is to help as many stray dogs as possible.

He agrees that “Now because of the pandemic, lots and lots of dogs are suffering due to hunger. Dogs in areas such as Rajbagh and Karan Nagar are the most vulnerable.”

He agrees with Lone that most stray dogs were majorly dependent on the footfalls of human beings, especially in the city centres. “It is very heartbreaking, you can see their hunger.”

Healing Pat started a feeding drive from the very first day of the covid lockdown. “Mostly we give them Pedigree. We also get chicken and mutton scraps for them from the nearby shops.”

For Mohammed, hunger is the same for everyone, be it humans or animals.

The two organisations often work together to protect stray animals.

“We started planning and working together. Some other volunteers have also been roped in for various other campaigns,” says Mohammed. Healing Pat has six active members so far and has been working for more than three years.

In Kashmir, he explains, we still have some kind people who are always willing to help these helpless animals.

He says the government has helped the cause to some extent. “I appreciate the Srinagar Municipal Corporation for providing us a facility to keep injured and paralysed dogs. But we need more.”

Although the pandemic has burdened government and civil society with greater responsibilities, Mohammed still has his dream in sight. “Our major goal is to build a good number of animal shelter homes in Srinagar and J&K at large.” 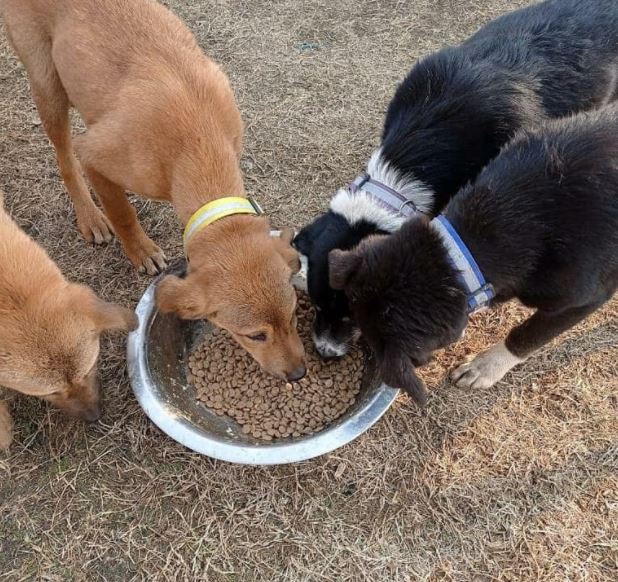