'Save Agriculture, Save Democracy Day' on June 26

The farmers agitating against the controversial farm legislations are showing no signs of demoralisation and are determined to continue the struggle “for as long as it takes.”

June 26, the anniversary of the Emergency by then Prime Minister Indira Gandhi was observed as ‘Save Agriculture, Save Democracy Day’ by the farmers across the states.

Narayan Dutt of Inquilabi Kendra Punjab said, “we have to tell the masses that we are facing an undeclared emergency where every voice questioning the government is being suppressed.”

They submitted a memorandum to the President of India and also to the Governors, braving water cannons and detentions at various places in Punjab, Haryana, Uttarakhand, Karnataka, West Bengal, Madhya Pradesh, Telangana to name some of the states.

“The valiant farmers' struggle led by the Samyukta Kisan Morcha (SKM) completes seven months. It was sought to be crushed by repression and defamation, but it has stood firm with the participation of lakhs of farmers from all over the country, of every religion, caste, creed, sex and language.

“June 26 is also the death anniversary of the legendary peasant leader and founder president of the All India Kisan Sabha (AIKS), Swami Sahajanand Saraswati.

“Attempts are being made to ignite communal hatred through mob lynchings and similar attacks on the minorities. Atrocities against dalits, adivasis and women show an alarming increase,” AIKS leader Hanan Mollah who is also a senior functionary of the Save Democracy Forum said.

The Forum organized an online public meeting to strengthen the ongoing ‘Save Agriculture - Save Democracy - Save Working People's Rights’ movement in the country and to protect the rights of the toiling workers and peasants.

The memorandum of the Samyukta Kisan Morcha addressed to the President reads, “We, the farmers of India, are writing this letter to you, the head of the nation, with deep anguish and indignation. Today on 26th June, upon the completion of seven months of our continuous protests at Delhi’s borders, and on the 47th anniversary of the Emergency in this country, we are writing to you from all parts of India about the twin challenges of saving our agriculture and saving our democracy.”

It further added, “when India became independent, we used to feed 33 crore citizens in the country; today, in about the same extent of land, we manage to feed around 140 crore Indians. During the Coronavirus pandemic, while the other sectors in the economy decelerated and slumped, we achieved record production in agriculture, ensured that our granaries were over-flowing and did so risking our own lives.”

“However, in return for this kind of service that we provided to the entire country, the Government of India which runs on your seal of assent, thrust on us three anti-farmer black laws which will destroy our farming as well as our future generations, laws that will snatch agriculture from our hands and hand over to big corporations. Moreover, other swords were also hung on our heads – penalties and jail terms for stubble burning in a new ordinance related to Delhi’s air pollution and subsidy withdrawal through the Electricity Amendments Bill 2020,” the memorandum stated.

The farmers have conveyed to the President that, “we are in deep debt, and in the past 30 years, more than four lakh farmers were compelled to take their own lives in a continuing spate of farm suicides. That is the reason why we are demanding that the MSP has to be fixed using the Swaminathan Commission formula of C2 cost+50%, and that such an MSP has to be guaranteed for all farmers in a legal framework.

Instead of fulfilling its promises and commitments on this front, the Government of India started a false jumla around ‘doubling farmers’’ income by 2022’ which is clearly not being achieved, and made you state the same in your speeches, bringing down the dignity of your esteemed position.”

They have apprised him that in the past seven months, to destroy the farmers’ agitation, the Government of India broke the principles and rules of democracy in every possible way.

“To welcome farmers who were moving towards the nation’s capital to get their grievances and demands heard and addressed, this government put boulders, sand trucks, barbed fencing and barricades in our way. It dug trenches on the roads and put in nails on the highways. It tear-gassed farmers, water-cannoned them and slapped false cases on them. Several were sent to jail.

“Instead of listening to the ‘mann ki baat’ of farmers, the government only listened to the lure of staying in power. Dishonest and fake conversations and dialogues were held. The agitation was sought to be destroyed through non-existent farmer unions.

“The protesting farmers were sometimes labeled as agents, sometimes as terrorists, at other times as Khalistanis or Parasites or Corona Super-spreaders. By manipulating the media, there were constant attempts at defaming and denigrating the movement,” the memorandum went on to state.

And further added, “without declaring an Emergency, democracy is being throttled every day. In this context, as the main custodian of our constitutional framework, there is a great responsibility on you, President Sir.”

The farmers plan to further intensify their agitation in the days to come. 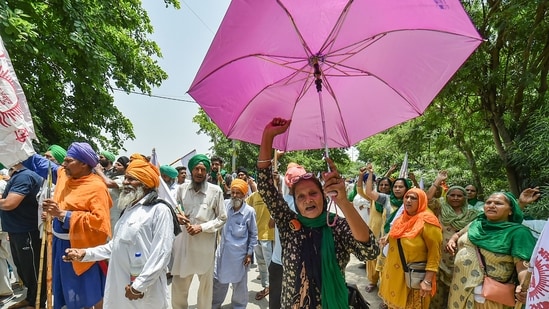