‘Will not allow anyone to break the farmers’ movement’

The Nuh district of Haryana bordering Rajasthan is among the poorest in northwest India, and has been witnessing large-scale attempts at communal polarisation by the right wing over the last few years. A substantial proportion of residents here are Muslims, as in the Mewat region which comprises parts of Nuh in Haryana, Alwar and Bharatpur in Rajasthan, and Mathura in Uttar Pradesh.

Farmers agitating against the controversial farm laws made an important intervention in Nuh on Monday when they held a massive Kisan Mazdoor Ekta Bhaichara Sammelan [Farmers and Labourers Unity and Brotherhood Meet] which focused on communal amity and promoting solidarity among the communities.

Thousands of peasants from all communities participated in the event held under the banner of the Samyukta Kisan Morcha, the umbrella organisation that has spearheaded the protests.

The mahasammelan was held in the background of two recent tragedies in this area. The first was the murder of Asif Khan, in his late twenties, by a group of men who surrounded his car and beat him to death, in what is said to have resulted from local strife. Attempts were made by Hindu right wing organisations to blame Khan for his murder.

The other incident pertaining to the region was the death of another youth, 24 year old Junaid of Jamalgarh in Mewat, whose family alleged the Faridabad Police illegally detained him and beat him brutally at the police station. 12 cops have been booked for the custodial murder according to reports.

A mahapanchayat was also organised by right wing organisations earlier this month, where hate speeches were made while supporting the culprits of the crime. Farmers say the event also sought to disrupt the farmers’ movement that has witnessed participation from all communities.

“There had been an atmosphere of mistrust, fear and helplessness prevailing in the area for quite some time. While the common people of all communities in Nuh district still have very cordial relations, certain elements have been trying to achieve communal polarisation by raising false bogies,” said advocate Arshad Khan, a social activist who participated in the event organised by farmers at Sunheda on Monday.

“We had even organised a Nagrik Sammelan on June 20 where a large number of representatives of Hindu organisations were invited so that misunderstandings between communities could be removed and the designs of those trying to divide the society on communal lines could be exposed.

“We have been trying to do our bit as and when we can. The response to this Nagrik Sammelan was very good and the event organised by the farmers takes the movement further in the right direction,” Khan told The Citizen.

All India Kisan Sabha functionary Sumit explained that there have been similar incidents in the recent past where attempts have been made to blame Muslims for even routine happenings.

“There has been a propaganda blitzkrieg in the region where Muslims are being accused of all sorts of things from forcible conversions to love jihad and terrorising the Hindu community. The right wing organisations had even come out with a full fledged report in support of these allegations which they submitted to the Haryana government some months ago,” said Sumit.

He explained that the agitation of farmers in Mewat area has been quite different from other parts of the country as the farmers are not allowed to raise their voices in this backward region. The event promoting communal solidarity is meant to give an impetus to the farmers’ movement in the area, while instilling confidence in the local peasantry, he said.

“The reason why this event was organised in Nuh on Monday was to convey the message far and wide that you cannot give a communal colour to a farmers’ movement. A farmer is the same everywhere and you cannot target him on the basis of his religion,” said another farmer leader Suresh Kauth.

Local MLA Aftab Ahmed who is socially very active throughout the Mewat region minced no words in saying that the communal pitch is being raised to new levels because of the approaching Uttar Pradesh elections barely nine months away.

“The majority of the people in the area are farmers and they come from all religions and communities. With there being no progress in terms of economic development or generating employment, communal polarisation is the shortest route out from being cornered. It helps divert attention from real issues,” said Ahmed.

“There has been so much of hate and false propaganda of all sorts against the Muslims living in this area. Only today the Supreme Court has dismissed a PIL (public interest litigation) seeking action against alleged forced religious conversion of Hindus in Nuh district by the Muslims.

“The focus of the engineered campaign is on promoting hate through false issues like love jihad and conversions while ignoring the issues that concern the country’s development,” Ahmed explained.

Meanwhile the SKM has stated: “The huge turnout of farmers at the Sunheda Kisan Mahasammelan indicates very clearly that farmers of the country want to prioritise their own rights over livelihoods and future, and cannot be swayed by the communal and divisive agenda.”

It stated that Mewat farmers had sent out a strong message that they will not allow anyone to break the farmers’ movement. “Values of peace, communal harmony, brotherhood, unity and justice will be upheld through this movement,” it underlined.

The speakers attacked the nexus between corporations and the top functionaries of the Union government while warning against its ‘divide and rule’ policy.

The farmers have demanded an unconditional withdrawal of cases registered against them at various places while pointing that attempts are being made to implicate the farmers in false cases.

The SKM has further stated that ahead of the polls in states like Uttar Pradesh and Uttarakhand leaders of the governing Bharatiya Janata Party are trying to assess the impact of the farmers’ movement on the party’s poll prospects.

“The party is not ready to look into the real issues of farmers for which farmers have been waging this struggle for seven long months now, but is keen on saving its vote bank. It is clear that this is the prime concern of the party. It is for this reason that SKM has decided to reach out to the public in Uttar Pradesh and Uttarakhand and ask them to punish the BJP for its anti-people agendas,” the SKM stated. 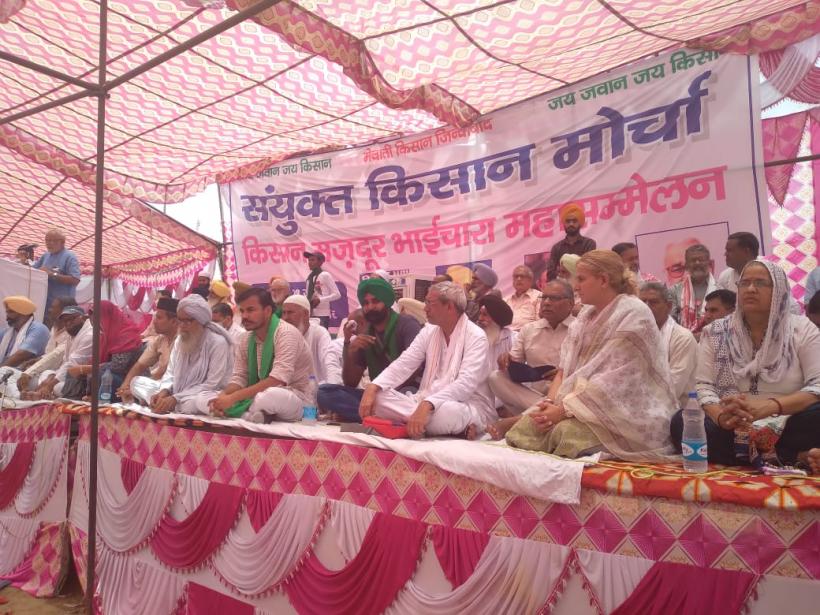