Acquitted of all charges under UAPA

He came out of jail after over a year and half saying that for him this was a victory of Indian democracy. “This is the first time in the NIA history that in a case under UAPA, they couldn’t even frame a charge. It indicates that the entire case was false and was based on fake documents,”Gogoi told The Citizen.

Gogoi, an Independent MLA from Sibsagar constituency, walked out of the Gauhati Medical College and Hospital, where he was being treated for various ailments, after the special NIA court sent the release order to the Guwahati Central Jail.

Gogoi had been behind bars since December 2019 under UAPA. He was arrested in December 2019 when Assam witnessed huge protests against the Citizenship Amendment Act (CAA).

“Even today they (ruling government) tried to impose another case on me linked with Maoists. The home department is desperately trying to keep me inside the jail,” Gogoi said.

“This is the history of the Indian judiciary system. This is a historic day not just for me but for the democratic system. But for the home department and those who conspired against me, this is a black day,” he added.

“There were two chargesheets against me by the NIA and I was discharged of all the charges. Under these circumstances, the home minister should have resigned today. Even the DG should have stepped down,” Gogoi said.

He said that the protest against the Citizenship Amendment Act (CAA) will continue.

“My struggle against the wrong and illegal things will continue in a democratic way. Now I will raise my voice inside the assembly. Our stand remains the same. We will continue to oppose CAA and the mega river dams among others,” Gogoi said.

“The ruling government put me behind bars so that they can stop the anti-CAA movement,” he pointed out.

Gogoi who started his journey to his constituency Sibsagar on July 2 said that his mission to oust the BJP from Assam has just begun.

“The BJP government put me behind the bars so that they can return to power,” Gogoi told reporters as he started his journey to his constituency for the first time after winning the election.

“But not any more. The mission to oust the BJP in Assam has just begun. I promise you all from today onwards I will work on that,” he added.

Of the people of his constituency who voted him to power when he was in jail, Gogoi said that he has no words to thank them.

“I’m overwhelmed by the love of the people. I’m so excited to meet the people of my constituency. I don’t know how to thank them. It has never happened in history. They voted me to victory when I was in jail. I couldn’t meet them. They are so special to me. After reaching my constituency I will bow in front of the people,” Gogoi added. 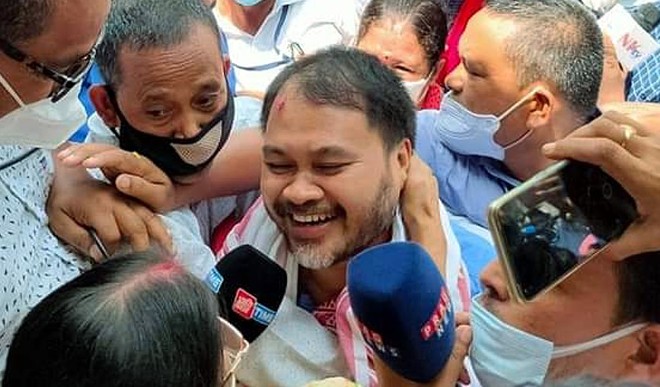