I belong to yesteryears--- only chronologically, I’d like to believe.The upside about being long in the tooth is to possess a rich bank of memories. Dementia permitting, one can dip into it at will. H.G. Wells wrote a novella, ‘The Time Machine’, about time travel in a device. But old age gives us an inbuilt time machine with a rewind and fast forward button.

Having ordered a pair of sports shoes online, the parcel arrived at the door in a day. It was certainly convenient and fuss-free. But my mind took an Olympic leap to school days when shoe buying was a chaperoned event. Bata, the storied Czech company, was the leading brand in footwear, both leather and canvas. An Indian company Carona was a competitor in canvas shoes and carried on a ‘product war’ like the Coke and Pepsi ‘ad -war’ in recent times with Bata. Carona folded up due to family feuds but Bata forges ahead well-shod and ‘fleet footed’ even now giving ‘Happy Feet’ to millions around the globe. In the sixties one of their ads said it all about their being numero uno: 'First Bata, then School’!

Visiting the downtown Bata shop in Srinagar to buy the standard round-toed buckled flats one felt a palpable excitement. Being fussed over by the salesperson for correct foot measurements and prodded by the parent to buy a size larger in the interest of parsimony, there was drama in getting shod! Arriving at a modus vivendi one would go home triumphantly with the trophy.

I remember keeping even the cardboard shoe-box, almost like an installation, to keep the new shoes neat till they got nicked and the love affair lost its edge. But the luxury in snowed-under winter was the beautiful soft leather shoes one wore at home, fur-lined and embellished with exquisite crewel embroidery by the Kashmiri artisans. A warm memory for those who could afford it.

One also saw the sturdy mountainous Kashmiri labour wearing dried reed grass sandals called ‘pulhor’ and carrying heavy loads in winter without a murmur. Apart from these and the ‘fleet shoes’ one remembers the ugly black gumboots one wore in the snow. It was great to have the knee-height protection from melting snow when the world was ‘puddle -wonderful’ and ‘mud-luscious’ as the poet E.E. Cummings wrote.

Evolving from quadrupeds, with natural padding, to bipeds, human beings have over millennia covered their feet in variants of shoes as we know them now. Anthropologists have gauged from the shrinking toe bones in skeletal remains that humans started wearing shoes around 40,000 years ago.

The Chinese women were subjected to the horrendous practice of foot binding at puberty for centuries to make the feet small, almost like a doll’s feet. Three to four inches length was a mark of beauty but it sadly led to physical deformities. Fortunately this patriarchal practice of ‘Lotus Shoes’ was banned and the foot binding died out in the early 20th century.

Shoes have very fancy avatars in this era of disposable incomes and brand consciousness. A Louis Vuitton, Gucci, a Jimmy Choo or a Nike--- one is spoilt for choice. A unisex covetousness for attractive shoes leading to shoe-fetishism is there for all to see. Imelda Marcos for one will be immortalised for her humongous shoe collection.

Lest we blame the shoes as greed enhancers, please remember that shoes have also been used from Biblical times as a protest tool. Many ‘Shoe Gates’ have been recorded but in recent memory the ‘shoeing’ by an Iraqi journalist at George W Bush is recall worthy. He threw both his shoes at the POTUS as his ‘sole’ weapon, who ducked them successfully! It is certainly a ‘shoo-in' that footwear can not be ignored. Even the Devil wears Prada! 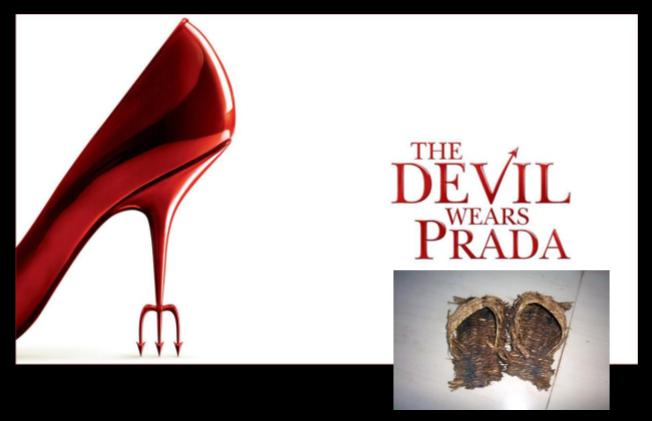