Govt does away with RTPCR requirement

The subsiding of the second wave has finally led to the hill states of Himachal Pradesh and Uttarakhand opening their gates. Tourists from the plains are arriving in swarms and have lowered their guard on many counts.

The influx accompanied by an inability to ensure optimum implementation of Covid standard operating procedures has left local residents terrified, even as hoteliers heave a sigh of relief, hoping to make use of whatever is left of the tourist season.

In Himachal Pradesh as many as 2.57 lakh vehicles reportedly entered the state from outside in the second fortnight of June. There were videos of thousands of vehicles lined up at the state borders on the day the state government opened the gates.

Later it did away with the mandatory RTPCR report requirement and even registration on the Cowin portal.

At present the position is such that locals prefer to stay at home, fearing the traffic snarls and unruly behaviour of some of the ugly tourists over and above the threat of the next Covid wave.

Only on Wednesday did the Union government reportedly caution Himachal as Kinnaur, an Indigenous district and tourist hotspot, continues to witness a positivity rate of over 30%. It reportedly conveyed that flexibilities and tourist activities must only be permitted in a calibrated and cautious manner.

Things have come to such a pass that Solan deputy commissioner Kritika Kulhari imposed Section 144 along the Ashwani rivulet in and around the popular tourist spot of Sadhupul near Chail.

This was done following reports of revellers polluting the water source besides throwing all Covid precautions to the winds. A ban has been imposed on setting up any kiosks or eating joints along the rivulet or organising any picnics or gatherings there.

The rivulet is a source of drinking water for people in Solan town and dumping garbage in the water is a serious health hazard.

“The fact remains that we are not prepared to handle a third surge of Covid19 cases with the new variant. The government should not have done away with the mandatory RTPCR. Even if people were resorting to frauds, the number of such elements did not go beyond 10%,” former Shimla Mayor Sanjay Chauhan told The Citizen.

“At present there is a mess that has been created. And the biggest drawback remains in the form of a missing policy on tourism in such times, when people in the plains who were trapped on account of lockdowns have suddenly ventured out after the lockdowns were lifted.”

The situation is very much the same in all the major destinations like Shimla, Manali, Dalhousie and Dharamshala.

Many hoteliers also agree that the restrictions could have been lifted in a more rational manner, but add that as of now there have been no instances of tourists spreading Covid19.

In fact, they say, responsible tourists making queries at hotels and homestays are very particular about the SOPs being practised and hygiene maintained.

“Even we are concerned about the outbreak of the third wave of Covid. The industry has witnessed a collapse and we want to operate in safety for as long as we can,” said a hotel owner from Kullu.

The opening of interstate bus services two days ago is all set to further increase the tourist pressure on the hills. There are reports also of long waiting lists for the Kalka–Shimla heritage train.

“The government itself fails to implement its orders. For the last few weeks there were instances of tourists coming from Delhi, Punjab and Haryana by air-conditioned luxury buses to Himachal border where they would get down to cross the border on foot for a kilometre or so, and later board locally hired vans or minibuses. No one was able to check this practice,” a hotel owner pointed out.

“There is a need for the police to make sure that social distancing is maintained at public places like the Mall Road. People should not be allowed to move without masks. Responsibilities need to be fixed,” said Anil Kant who runs a hotel in Manali.

Meanwhile in the neighbouring hill state of Uttarakhand, which faced local and international flak for promoting the Kumbh Mela in Haridwar said to have acted as a Covid superspreader, the government has been compelled to put the Hindu Char Dham Yatra on hold after the Uttarakhand High Court stepped in to order a stay on the annual event.

“Having concluded that the decision of re-opening the Char Dham Yatra would lead to inviting a calamity, it is in these circumstances that this Court is compelled to stay the part of the Cabinet decision dated 25.06.2021. The said stay is strictly in the interest of the public, and in the interest of justice,” it stated.

The court directed the government to ensure that all ceremonies and rituals carried out within the sanctum sanctorum of the Char Dham temples are streamed live, so that devotees may witness the deity and perform their prayers.

“Tourism in such times needs to be regulated,” said social activist Indresh Maikhuri. “There is a need to sensitise even those tourists that are well off that Covid19 has not vanished.”

“Even the mandatory RTPCR report serves no purpose as it checks only interstate movement. How does it work in the case of a person coming from Dehradun, Khatima, Kashipur or Rudrapur? In addition there is no responsibility fixed on anyone on the ground on stringent implementation of SOPs.”

Nainital has witnessed a demographic change over the last few decades, Pande said. “Previously tourism was one of the vocations here along with several government offices and educational institutions. But the failure of the governments to generate employment led to a sudden surge in hotels in the name of tourism while the institutions and offices moved out or witnessed a decline.

“It is a sad state of affairs when lower-rung employees express happiness over the spurt in tourist arrivals. They do not realise the risks they face as frontline workers of the hotel industry earning paltry sums while the hotel owners make money.

“The locals outside the tourism trade are feeling terrorised at the way things stand. Nainital actually makes a good case study on how tourism has gone wrong, leading to a spurt in illegal construction and arrival of tourists far more than the town’s handling capacity.” 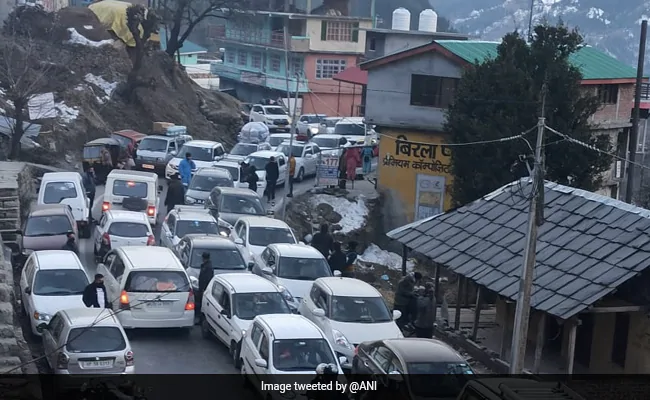