Farmers Step In to Occupy Vacuum in Public Space

Protests also held to mark the ‘murder’ of Stan Swamy

Protesting farmers have stepped in to occupy the ‘public space’ which they claim has been vacated by the political opposition of the country. As part of their ongoing agitation the farmers say they are raising issues of public importance which ideally should be discussed by the opposition parties at all levels.

Besides taking on the government on the rise in prices of essential commodities, fuel prices, religious polarization, and forced displacement of people, they are also persuading the opposition parties to back their agitation during the forthcoming session of Parliament.

They have drawn up a plan to intensify the agitation during the days that Parliament will be in session. They have also planed events in the run up to the session so that an atmosphere is built where the controversial farm laws remain the centre of political debate both inside and outside the House.

Taking on the Union government on the issue of fuel price hike, the farmers have given a call for a mass public protest on July 8. People have been requested to come to national and state highways in their tractors, cars, motorcycles, scooters and other vehicles and with LPG gas cylinders to raise slogans against the constant hike in prices of the cooking gas as well as other essentials.

The protests will be organized in various states while there will be big demonstrations at all the protest sites where the farmers have been camping for the last seven months at the gates of the national capital.

“People feel cheated. There is a vacuum that is being filled by the farmers’ movement as the people seen in the farmers someone who is ready to raise their voice. This is ideally the work of the opposition parties, but majority of them have done nothing concrete in this direction and in fact have been the supporters of the neo-economic policies that are anti-people which the ruling dispensation has been openly promoting.

“The people’s space has been filled by the farmers’ struggle and the farmers have emerged as the people’s voice,” said Narayan Dutt of the Punjab Inquilabi Kendra even as he was busy making arrangements for the July 8 protests.

Farmer leaders say that every demonstration and protest being planned has at its core the three controversial farm laws passed by the Union as these laws are symbolic of the ‘pro-corporate’ and ‘anti people’ face of the ruling dispensation, so much so that the people for whom the laws were made are not even consulted.

The Samyukta Kisan Morcha which is the umbrella organization spearheading the unprecedented farmer protests across the country has meanwhile come out with several decisions to intensify protests in the days to come.

As the parliament session is scheduled to begin from July 19, the farmers will be sending a ‘warning letter’ on July 17 to all the opposition parties in the country to ask them to ensure the session is utilized to support the farmers’ struggle and ensure their demands are met by the government.

“On July 17, it will be the opposition that will be our target. If any opposition leader speaks in favour of the ruling dispensation, he will face our protests. We are very clear about this,” said Jagmohan Singh Patiala of Bharatiya Kisan Union (Dakaunda).

Then from July 22, five members per organization and at least two hundred protestors per day will protest every day outside Parliament House until the monsoon session ends.

“We are ready to court arrest if need be, but we will be sending at least 350 to 400 people daily for protests,” Jagmohan Singh added.

According to a statement by the SKM:

“Union ministers Narendra Singh Tomar and Piyush Goyal were part of eleven rounds of formal talks with Samyukt Kisan Morcha representatives in the months of December 2020 and January 2021.

“The government’s intentions are not trust-worthy – farmers know that keeping the laws alive will lead to abuse of executive power towards the same objective of supporting corporates in various ways, at the expense of the farmers.

“Further, when the very objective of legislation has gone wrong and is against farmers, it is obvious that a majority of clauses inside the statute will be to meet those wrong objectives; mere tinkering here and there will not work.”

“Farmers have also pointed out that these laws have been brought in unconstitutionally, and undemocratically. The central government has ventured into areas where it has no constitutional authority. To worsen matters, it also followed undemocratic procedures to thrust the laws on the nation's farmers. All of this is unacceptable, and therefore, farmers are firm on their repeal demand.

“On the other hand, the government has so far not given a single reason as to why these laws cannot and should not be repealed. We can only conclude that an elected government in the world’s largest democracy is playing ego-games with the largest section of its citizens – farmers and prefers to choose the interests of crony capitalists over the annadaatas of the country.”

Meanwhile, in Punjab, the proposed plan to gherao the Moti Mahal residence of Chief Minister Amarinder Singh has been postponed for now given a slight improvement in the supply of electricity.

Farmers claim that local support has been strong and consistent for their movement at the borders of Delhi. There is a large tractor convoy being planned from Pilibhit in Uttar Pradesh and more farmers are reaching the protest sites, just as more material supplies are being donated by local communities.

Recently, a large quantity of wheat was received from the villages of Jind in Haryana. Support has also been coming from workers associated with various trade unions, students, lawyers and others. Solidarity protests are organized in the evenings by youth groups at traffic intersections in various urban centres of Punjab.

“The protests are powered by the peaceful resolve of extra-ordinary citizens. At Ghazipur border, Swaran Singh from Madanpur village of Bulandshahr district has been around for seven months now, protesting peacefully and determinedly. He is 101 years of age,” the SKM statement said.

Recently the farmers had organized a marathon at Ghazipur border in memory of the legendary athlete Milkha Singh.

Farmer and other organizations also held protests at various places to mark the death of Dalit, Adivasi and civil rights activist Stan Swamy, 84, calling it a ‘murder’ as he was denied preventive health and hygiene aid despite being critically ill. 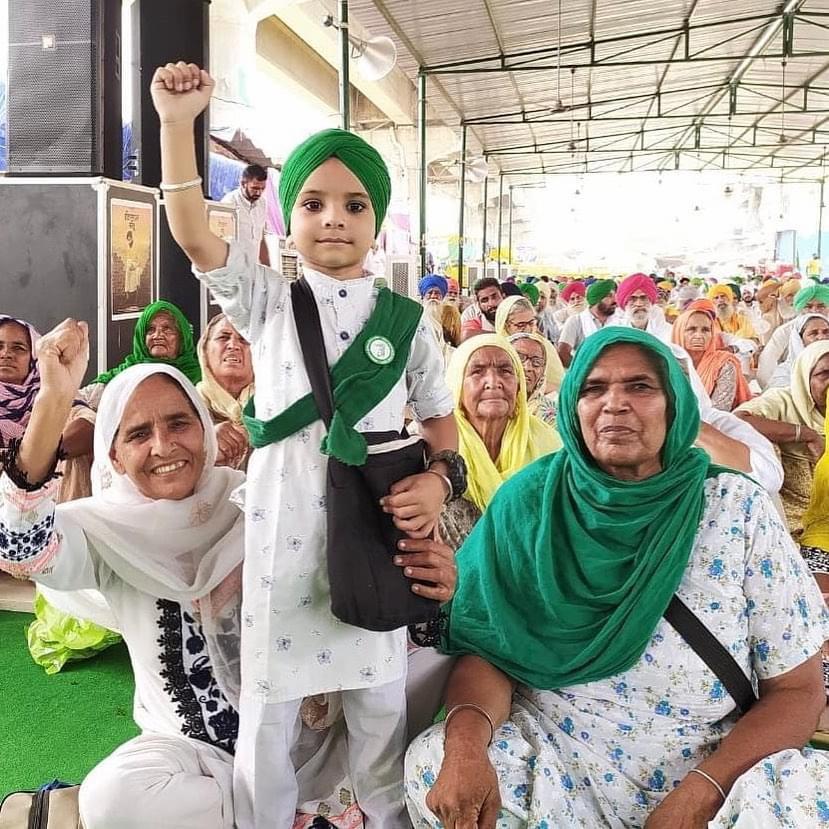