Farmers Vs BJP, No End in Sight

Bharatiya Janata Party (BJP) leaders on the ground continue to pay a heavy price for the central government’s refusal to withdraw the three controversial farm laws that have the farmers protesting on the streets since the past eight months.

From facing hostile slogans and black flags to being prohibited from entering villages, particularly in Punjab and Haryana that are the seeding ground of the ongoing farmers’ movement, the BJP leaders are being heckled by the agitated farmers on an almost daily basis.

In fact, the frustration within is mounting, and the face off is taking an uglier turn.

Several incidents over the past few days point to increasing hostility. Early this week, about a dozen BJP leaders were reportedly rescued by the forces after the intervention of the Union Home Ministry and the Punjab and Haryana High Court from a house in Rajpura near Patiala where they had been reportedly held ‘hostage’ by the agitating farmers.

A series of events that began with the farmers trying to disrupt a district level meeting of the BJP and the party leadership adamant on having the event culminated in the crisis.

On Wednesday morning there were reports of more than 100 farmers being booked for sedition in Sirsa in Haryana for allegedly damaging the official vehicle of Haryana Deputy Speaker Ranbir Gangwa on July 11. The use of the sedition law against the farmers has come in for criticism from various corners.

Veteran political observer Jagtar Singh while pointing out that farmers are not anti national, has written in his blog, “How can the protest by the farmers be sedition? Even if one concedes that there might have been some stray cases of violence, the same should have been dealt with under the criminal law.”

Earlier on June 30, BJP’s Rajya Sabha member Shwait Malik had to be whisked off through another route as the farmers had laid siege to the All India Institute of Medical Sciences in Bathinda where he had gone for a meeting.

Prior to that the BJP legislator from Fazilka, Arun Narang was reportedly stripped and heckled in March.

These are some of the incidents that have made page one headlines. Otherwise reports of heckling of BJP leaders and those from its ally in Haryana, Jananayak Janata Party (JJP), are coming in on almost daily basis.

In fact by the admission of the farmers themselves, the targeting of the BJP leaders is more ‘blunt’ in Haryana where even women protesters are pretty aggressive when it comes to removing barricades or facing the cops.

There is a pattern in the incidents being reported. The farmers on coming to know of a BJP leader’s visit for inauguration or stone laying ceremony or any other function reach the spot in large numbers and protest through slogans and black flags.

They have claimed that their protests are peaceful, byt the BJP leaders and their supporters resort to indecent gestures and abuse to provoke them. The BJP on its part, continues to hold the farmers responsible for the aggression.

However, after such confrontations turn violent FIRs are invariably lodged against the farmers, with some being taken into custody by the state police. This is then followed by the farmers and those sympathetic to their cause laying siege to Police Stations till the FIRs are cancelled and those detained released.

“It is a decision of the farmers’ leadership that the BJP leadership will meet protests in the form of black flags and slogan shouting. There is to be no manhandling as no opportunity is to be given to the BJP or the government to take legal action against peacefully protesting farmers,” Kanwaljit Khanna who has been instrumental in the farmers’ movement told The Citizen.

He further said, “It has also been decided that the BJP leaders will not be allowed entry in the villages and leaders of other parties like the Congress, Shiromani Akali Dal and others too will face questions on their stand and actions in the context of the demands being raised by the farmers.”

Interestingly, former Punjab minister Anil Joshi from the BJP has been expelled for reportedly trying to apprise the party top leadership about the farmers' anger. And pleading for dialogue to resolve the issue.

“The way out in such a situation across the globe is through talks. The deadlock should be over as it is almost one year since the ordinances were brought about. As regards the targeting of leaders, such things happen whenever there is such a scenario,” Joshi told The Citizen.

When asked about his own political future, he said, “As a Punjabi Hindu I will continue to fight for Punjabiyat, Punjab and its people standing shoulder to shoulder with Sikhs as well as others. We have to be at the forefront of this struggle. Whenever there is such a people’s struggle, sacrifices have to be made.”

However, BJP’s Punjab state secretary Subhash Sharma is unfazed by the hostilities against his party leaders. He says, “These attacks are politically motivated and sponsored by the Congress and other parties to restrict the growth of BJP. They are scared of the growing aura of the BJP which is a national party. They are scared of the emergence of the BJP in a strong way in Punjab. The party is gaining support in Punjab.”

He further said, “These protests and attacks are in fact an opportunity to show my leadership. We take them as an opportunity and are not bothered about them. They give us a political space where support is coming for us.”

Farmers are particularly hostile towards the BJP leaders who have been using derogatory terms against their leadership and the movement. In Haryana it is the Chief Minister Manohar Lal Khattar and his cabinet colleague Anil Vij who have been at the top when it comes to facing the farmers’ ire. The farmers have been trying to protest at every function these two are to attend.

At Dhanaula in Punjab when the farmers had come out in large numbers to protest against BJP leader and party spokesperson Harjeet Grewal. The farmers have been agitated over Grewal fanning the flames against the farmers since the beginning of the peasant movement.

A statement issued by the local farmer leadership said, “Farmers have sometimes been branded as extremists, sometimes as Khalistani, goons, scoundrels, anarchist elements and sometimes as Naxalites. This gossipy leader has taken a personal hostile attitude towards the farmers. This arrogant leader continues to challenge the farmers everyday. Today we have come to his town to warn him to stop his anti-farmer activities.”

The farmers are now gearing up for intensified protests during the monsoon session of Parliament that starts on July 19. 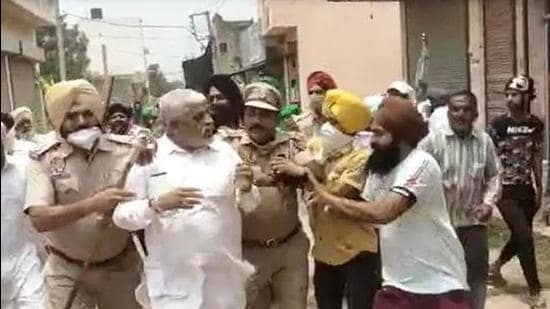