A fresh round of demolitions began in Khori village on July 14, after the Supreme Court ordered around 10,000 homes to be destroyed for allegedly encroaching on protected forest land.

With the whole country facing heavy downpours and the ever present threat of covid, the court order has made many people homeless, having to live in makeshift tents amidst the debris of their homes.

The people of Khori have been fighting the verdict along with various organisations, demanding the demolitions be ceased, or at minimum that the dispossessed people be rehabilitated. However, no immediate action has been taken.

Recently human rights rapporteurs at the UN too urged the Indian government to halt the demolitions. The statement from the Office of the United Nations High Commissioner for Human Rights says the land was designated a protected forest in 1992, despite there being no trees on it.

“We appeal to the Indian government to respect its own laws and its own goal of eliminating homelessness by 2022 and to spare homes of 1,00,000 people who mostly come from minority and marginalized communities,” the expert statement reads.

“It is particularly important that residents be kept safe during the pandemic.”

The UN statement also expresses worry at the decision made by the Supreme Court of India.

“We find it extremely worrying that India’s highest court which has in the past led the protection of housing rights is now leading evictions placing people at risk of internal displacement and even homelessness, as is the case in Khori Gaon”.

It emphasises that the “role of the Supreme Court is to uphold the laws and to interpret them in light of internationally recognised Human Rights standards not to undermine them. In this case, the spirit and purpose of the Land Acquisition Act 2013 among other domestic legal requirements have not been met”.

In Khori meanwhile, residents are being forced to stay in tents in the midst of monsoon rains, with no access to clean water, food or electricity.

“Some people even sold off their ancestral lands in their villages to make a house here. We have spent 8 lakh rupees to build our house. It’s all the income we have made in all these years. Where are they supposed to go now?

“That’s the problem – the government is not giving us what they rightly should to the people here,” said Roshan Singh, who has lived in Khori nearly ten years.

There are 1,400 flats to be allotted in Dhabua to some of the dispossessed – for which they will have to pay – but the flats are not due to be completed for at least six months.

No transit camps have been set up for the displaced.

One of the biggest hurdles for the residents of Khori is that many do not have the necessary documents to be eligible to get the flats in Dhabua.

Residents will be considered eligible for allotment of flats if they have an annual income of up to Rs 3 lakh, and if the “adult earning member/head of the family” meets one of three criteria:

- their name was registered in the voter list of Haryana's Badkhal assembly constituency as of January 1, 2021

- any family member has an electricity collection issued by the Dakshin Haryana Bijli Vitran Nigam (DHBVN).

People covered under the rehabilitation plan will also be given 2,000 rupees for six months to rent a house. But not many have the means to avail it.

“We only have the Aadhar card so there is no hope for us,” said Nitish who has been living in Khori for 15 years, and now lives in a tent with his family after the court verdict demolished their home.

Residents are also required to deposit 17,000 rupees within the first 15 days of allotment of the flat, after which 2,500 rupees per month are to be deposited for the next 15 years.

However, after investing huge sums in the houses that are now being demolished, many cannot afford such amounts.

Disemployment is also a major concern many youths of the village who have not been able to secure a job due to the ongoing pandemic, making them financially dependent on their parents.

Many others have lost their only source of income as the shops they worked in have also been demolished along with their homes. 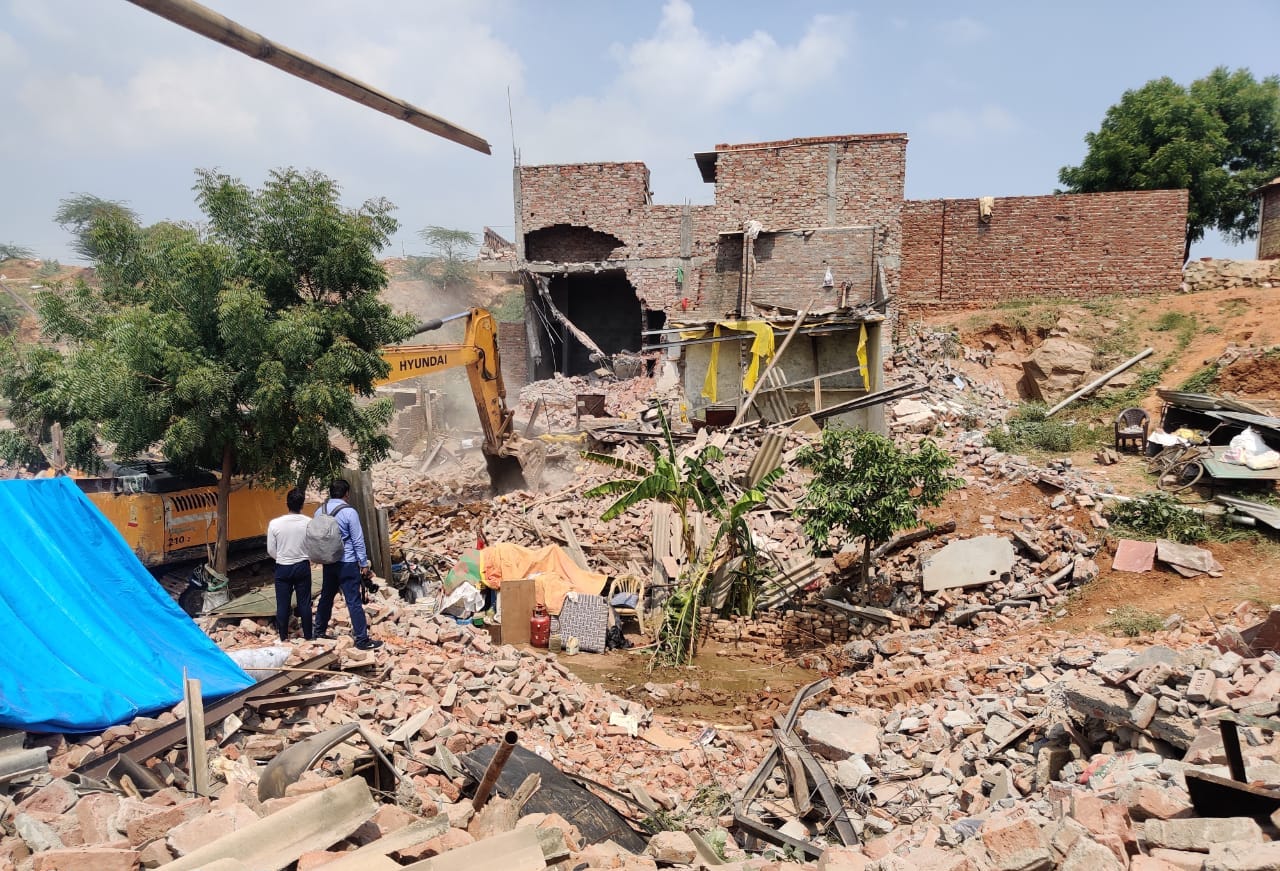 Many families are left without the money to rent another place to stay. “We haven’t had a stable job for two years, how will we rent a new place? We don’t even have money to buy food,” said Padmavati, a mother of one who has been living in Khori for 10 years.

“We are living off of whatever the women of the community are sending [from the villages]. We have to sit in the sun, the rain, we have no other option.”

According to Satyawati, whose home has been demolished, “My husband works as a household help but because of the pandemic there is no work available. We don’t have any money on us to buy food, I haven’t eaten anything all morning.”

Many are living at the demolished site with all their belongings. “We keep hearing about the upcoming third wave - even in such circumstances they are breaking our houses,” said Nitesh.

For young people in Khori village, it is not just the constant fear of being homeless. With no electricity or internet, online classes have come to a halt.

Around 20,000 children live in Khori. “It’s very hard to get our phones charged, and the network has been a persistent problem for a month or so,” said Nitesh.

But the biggest problem of all has been access to food for the people now living in makeshift camps.

“We collect money and make food for our sisters staying in Khori, this is how many are surviving. We get stopped by the police as well and we have to lie on our way to reach the people in need. In the village people are forced to sit on wet floors all night long. These are the conditions we have been pushed into,” said Khori resident Noor Salma.

With many living with all their belongings in makeshift camps the heavy rainfall has also destroyed many people’s possessions.

“A lady was asking me to get her a bedsheet because her child was cold, but I have limited resources too,” Noor recalled.

People here are losing hope as they witness their homes which have sheltered them for years being demolished right in front of their eyes.

“I live alone, have undergone a surgery that restricts me from carrying anything heavy, I am losing hope day by day,” said Salma with heaviness in her voice.

“If they demolish my house I won’t be able to move a thing. Dying seems an easier option now.”

At a press conference held on July 20, advocates, farmer leaders, senior journalists, activists, professors as well as residents of Khori gaon expressed their dismay at the court-ordered eviction.

N. Sachin, professor at the Dayal Singh College in Delhi University, emphasised that such a demolition during the corona pandemic is “unethical and inhuman”.

“State has used the labour of these people during mining, and now when they are done labouring, the state is evicting the poor people.” 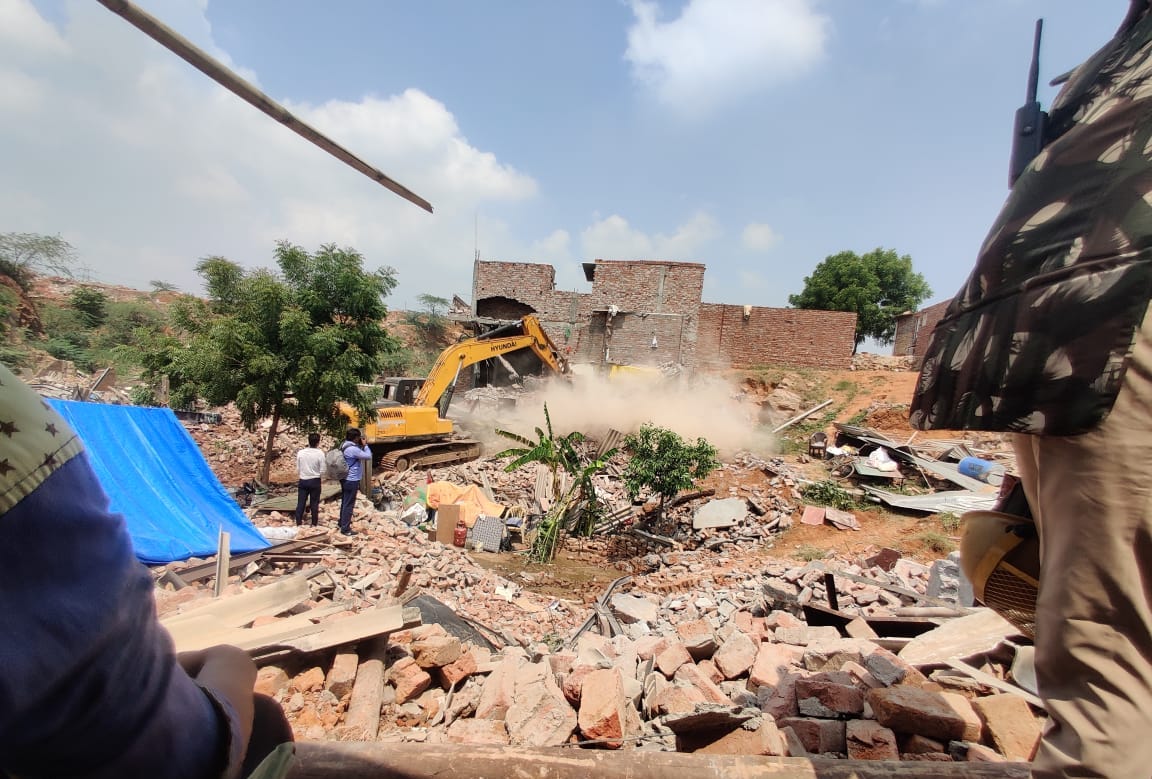