On Sunday, August 8 at a rally called for a Bharat Jodo (Unite India) Movement videos and ground reports show a large number of men including some wearing Bajrang Dal shirts raising slogans to “Boycott Muslim businesses” and “When Muslims are cut up, they will cry Ram Ram”.

Muslims in India are on the verge of facing genocide .

A protest org. by RW Hindus in the Nat'l Capital New Delhi was echoed with slogans of slaughtering Ms.

These extremists groups have been given free pass by GOI. pic.twitter.com/NhvfoIwJ8E

Pamphlets were also reportedly distributed calling for the “Annihilation of Islam”.

Upadhyay told the media that while he addressed the rally in the morning, the slogans were only raised later in the day.

“The rally was from 10 to 12 pm. Whereas the sloganeering happened around 5 pm. Our rally was outside the park hotel but the slogans were given near the Parliament house police station. I do not know who they were,” he stated.

In a video uploaded by Upadhyay himself on Twitter, the crowd is visibly flouting Covid protocols and are raising slogans asking PM Modi to introduce nationwide uniform laws on education, tax, civil affairs, religion and population.

Another video that has gone viral since then shows how a young reporter took on the crowd when they asked him to chant ‘Jai Shri Ram’ (Victory to Lord Ram).

The reporter, from the YouTube channel National Dastak, is seen telling the crowd that he will chant the religious slogan if and when he wants, and will not be coerced into chanting it. In response some people in the crowd can be heard calling him a ‘jihadi’.

Anmol Pritam, the young reporter, took to Twitter to say, “An attempt was made to call me ‘Jai Shri Ram’ by intimidating me. When I refused, I was also pushed. you guys see yourself in the video.”

On Monday, DCP New Delhi Deepak Yadav told the media, “We are verifying all the video clips.”

Another police officer told the press that the police had refused the organisers permission to host the event.

Annie Raja, general secretary of the National Federation of Indian Women, and social activist Shabnam Hashmi have filed a complaint with the police regarding the incident.

The complaint states that “videos from the demonstration show saffron-clad men shouting highly communal and provocative slogans that have a clear intention to cause public disorder and inflict violent harm on Muslims.” The following day, August 10, Delhi police and RAF personnel detained activists near Jantar Mantar who had gathered to protest the previous day’s rally.

Photographs by Danish Pandit for The Citizen: 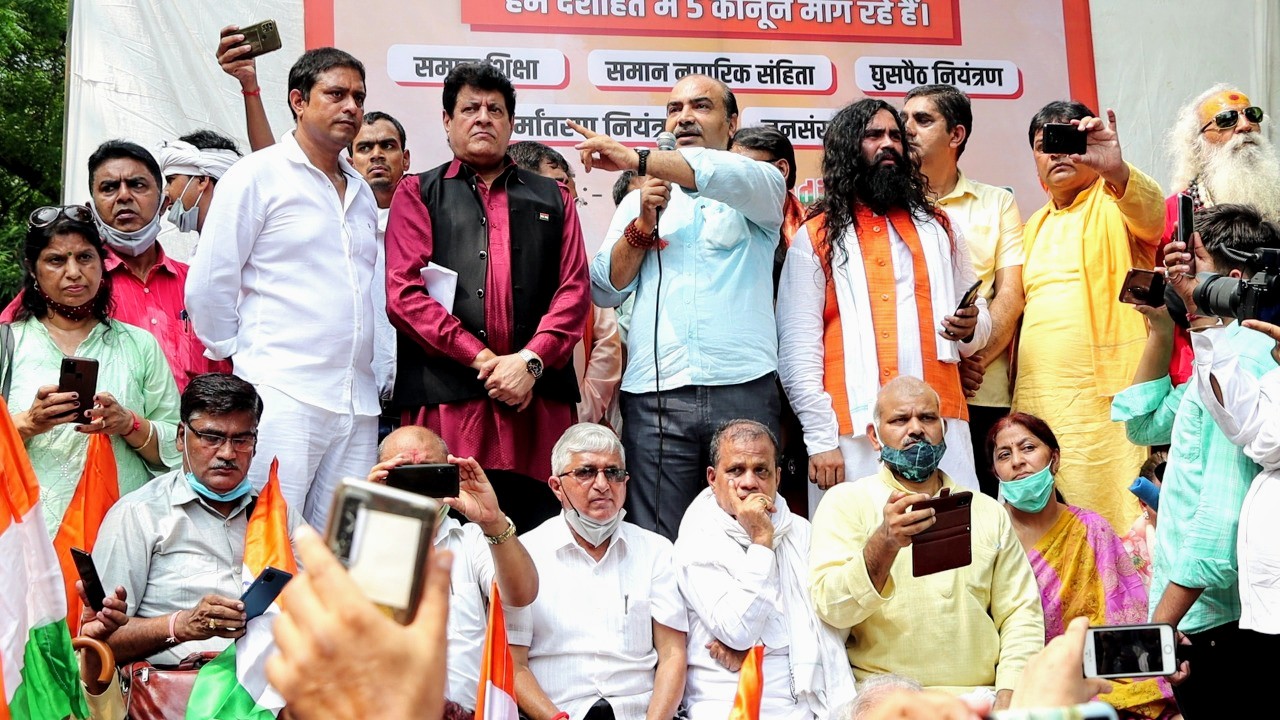