It was a sight to watch Congress Rajya Sabha member from Punjab Partap Singh Bajwa stand on a table raising slogans with his colleagues around him, and go on to throw a file at the podium demanding repeal of the three “black laws” on agriculture enacted last year by Parliament.

The same was done by Sanjay Singh of the Aam Admi Party when he aired a high-pitched protest sitting on a table and surrounded by his colleagues.

Harsimrat Kaur Badal of the Shiromani Akali Dal (Badal) who was earlier a minister in the Modi cabinet before her party walked out of alliance with the BJP, was seen standing outside Parliament carrying placards with photographs of the “martyrs” of the farmers’ agitation.

Farmers’ issues are gaining centre stage in Indian polity, with protesting farmers able to compel the entire party opposition to speak on their behalf not only within Parliament but outside.

The issues are finding resonance also on account of the forthcoming assembly polls in several states where farmer votes count for victory.

This is a significant achievement given the fact that the farmers have maintained equidistance from every opposition party in the course of their struggle.

“The Kisan Sansad and the farmers’ whip issued to the entire opposition ahead of the Parliament session has made a big difference and has resulted in the farmers’ issue taking centre stage in Indian politics,” said Kanwaljit Khanna who has been instrumental in organizing the ongoing protests.

“The farmers’ whip had called for the entire opposition in Parliament to not resort to any walkouts but keep on raising farmers’ issues in both the houses vociferously. The opposition heeded this whip,” Khanna told The Citizen.

“The impact was such that a team of opposition members including Congress leader Rahul Gandhi came to the Kisan Sansad being held at Jantar Mantar. Even the Punjab Chief Minister Captain Amarinder Singh had to go to meet Modi and demand the repeal of the laws,” he added.

Urging Modi to immediately initiate steps for the repeal of the controversial farm laws and to amend the relevant laws to include farmers in the free legal aid category, Amarinder Singh drew attention to the widespread resentment among farmers of Punjab and other states against the laws, which have cost the lives of more than 400 farmers and farm workers.

The Punjab CM added that failing to heed the stir would pose a security threat to the border state and the rest of the country, with Pakistan-backed forces looking to exploit the farmers’ anger towards the government.

Singh pointed out that the continued agitation was not only impacting economic activities in Punjab but had the potential to affect the social fabric, especially with political parties and groups taking strong positions.

Harsimrat Kaur Badal, while protesting outside Parliament House, asserted that the National Democratic Alliance would be evicted in 2024 to pave the way for a pro-farmer government.

Later raising the issue inside the House, Badal said she had brought the pictures of the farmers to Parliament because Union agriculture minister Narendra Singh Tomar had questioned their very existence, when he stated that the government did not have any data on deaths during the farmers’ agitation.

Instead of questioning their existence, said Badal, the government should reach out to the affected families and give them succour.

Meanwhile AAP Lok Sabha member from Sangrur in Punjab Bhagwant Mann while supporting the constitutional amendment on Other Backward Classes introduced on Tuesday made it clear to the Union that India is an agriculture-oriented country, with about 90% of the OBCs, especially in Punjab, dependent on agriculture.

“Thus, the existence of OBCs, like the farmers and farm labourers, is also in jeopardy if the three agriculture laws which are being imposed on annadatas [grain-givers] by the central government are not repealed or withdrawn,” said Mann.

“Therefore, the Modi government is urged to withdraw the anti-agriculture black laws immediately.”

He gave the example of Nabhas’ agroindustry in Punjab, saying that if farmers do not survive, how will the Ramgarhia community which makes tools, tractors and harvester combines survive. “Similarly, how will the employment of thousands of workers in these industries be saved?”

Mann said that corporate houses will cultivate thousands of acres of farms for agriculture, where there will be no need for tools or small tractors made by masons-mechanics from Punjab or other states. He said this was the reason backward classes are increasingly participating in the movement.

Mann further said that he had moved an adjournment motion on the farmers’ issue for the eleventh time, because without taking action to withdraw the anti-agriculture laws there should be no work in Parliament.

“The country is celebrating the 74th anniversary of independence on August 15, but even today our people have not got mental, economic and educational freedom,” he said.

“If freedom was real, even the poor and ordinary children in government schools today would become officers, and government offices would be free of corruption.”

Meanwhile, the city of Patiala which is also the constituency of Amarinder Singh witnessed a massive three-day protest by farm labourers.

Protesting under the banner of the Sanjha Majdoor Morcha, the labourers demand a waiver on their loans and electricity bills, allotment of residential plots to the landless, and an increase in the old-age and widow pensions to ₹5,000.

These farm labourers are also demanding that the three contentious farm laws be scrapped.

They plan to hold three-day protests outside the residences of various state cabinet ministers across Punjab from September 1. 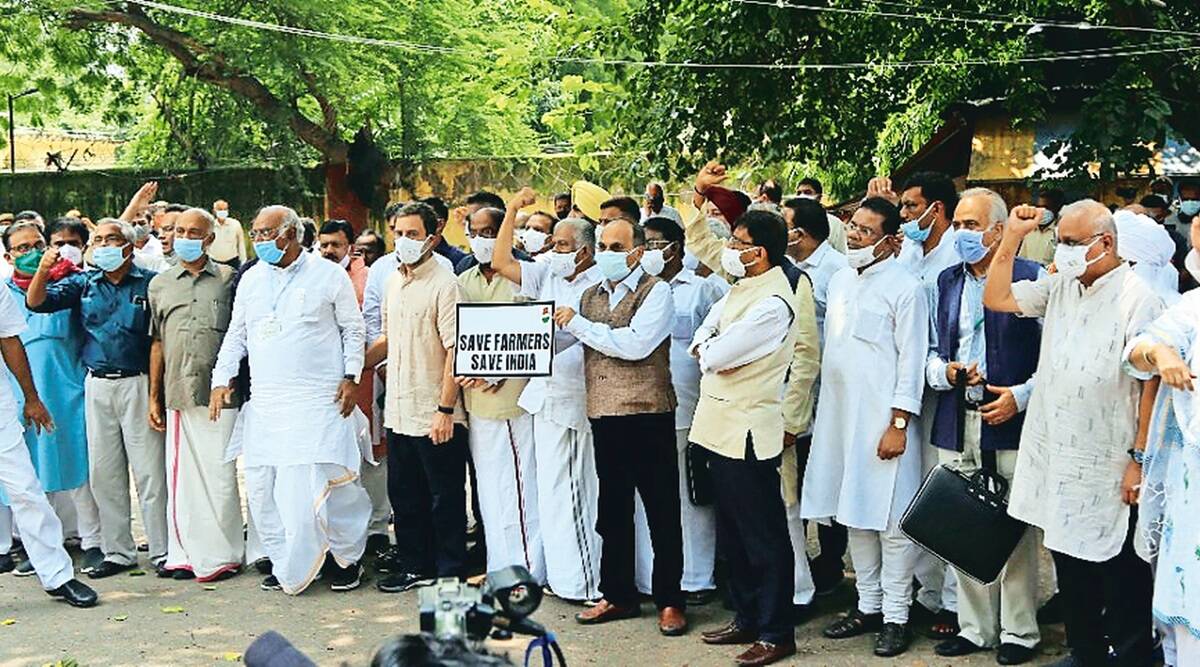