X
With less than six months to go for the polls, the Punjab Congress seems more keen on playing musical chairs than unitedly going into the electoral battle. Developments on Tuesday were a big indicator towards this.

By evening came reports about an 'open revolt' against Chief Minister Amarinder Singh by four of his ministers and more than two dozen legislators saying they had lost faith in him.

This followed a meeting at the house of one of the ministers, Tript Rajinder Singh Bajwa where it was decided to send a five member team to meet party president Sonia Gandhi for her intervention.

The dissidents also met recently appointed Punjab Congress chief Navjot Singh Sidhu who later tweeted, 'Got a call from Tripat Bajwa ji asking for an emergency meeting... Met him along with other colleagues at the PPCC office. Will apprise the high command of the situation.'

By late evening there came a statement from Amarinder's office saying that seven of the 20-odd MLAs and ex-MLAs who were supposed to have been party to the demand for the removal of the Chief Minister had 'completely and categorically' disassociated themselves from any such move.

These leaders denied being part of 'a conspiracy hatched by a section engaged in trying to drive a wedge within the party'.

They said the closed door meeting at Bajwa's residence, following which their names were 'fraudulently' released along with others, was convened to discuss party affairs.

The developments come a day ahead of Punjab affairs in-charge Harish Rawat's visit to Chandigarh as the shadow boxing between Amarinder and Sidhu continues.

As Punjab enters polling season, the state's politicians along with their aides are displaying a penchant for having their foot in their mouth. And who else is the trendsetter but the Congress, though the malady extends to other parties as well. The politicians' priority on most of these occasions has been trivial issues which do not serve the public good at all.

Everyone is well versed with the recent infighting within the Congress that saw cricketer turned politician Navjot Singh Sidhu being appointed the Punjab Congress chief after he launched attacks against Amarinder Singh.

Well, Sidhu has been on an appointment spree since then. He first appointed ace hockey player and Congress MLA Pargat Singh as general secretary (organization) and later former Director General of Police Mohammad Mustafa as his principal strategic advisor and Punjab Congress Committee coordinator with the All India Congress Committee.

Pargat is said to be a part of the five member delegation heading to meet Sonia.

Sidhu appointed three more advisors, including Fatehgarh Sahib MP Amar Singh along with Malvinder Singh Mali and Pyare Lal Garg. These were over and above the appointment of four working presidents in Sangat Singh Giljian, Sukhwinder Singh Danny, Pawan Goel and Kuljit Singh Nagra at the time of Sidhu's own elevation.

The joke doing the rounds in Punjab is by the day of polling Sidhu would surely have appointed a parallel cabinet.

Since then it is Mali and Garg who have been a source of embarrassment to the party, triggering another round of potshots by rival camps.

While Mali expressed an 'unsavoury' view on Kashmir, Garg expressed views on Pakistan that are diametrically opposed to the stand of his party, the chief minister and even the Centre.

The CM took strong exception to their statements, warning them against such 'atrocious and ill-conceived comments' 'potentially dangerous to the peace and stability of the state and the country'.

He told them to stick to giving Sidhu advice and not to speak on matters of which they had little knowledge and no understanding.

He said the 'extraordinary' statements of Mali and Garg were totally misplaced and antagonistic to the stated position of India and the Congress on Pakistan and Kashmir.

'Kashmir was and is an inalienable part of India,' asserted the chief minister, adding that with his proclamation to the contrary, Mali had effectively and inexplicably toed Islamabad's line.

'This is totally anti-national,' he said, slamming Mali for failing to withdraw his statement despite the widespread condemnation it had evoked from other parties and from within the Congress.

Ridiculing Garg's statement that Amarinder's own criticism of Pakistan was not in the interest of Punjab, the Chief Minister said Sidhu's advisor was clearly disconnected from the ground reality.

'The fact, which every Punjabi and in fact every Indian knows, is that Pakistan's threat to us is real. Every day they are pushing weapons and drugs into Punjab via drones in a brazen attempt to destabilize our state, and our nation. Punjabi soldiers are dying at the borders at the hands of Pak-backed forces,' he claimed.

It is the prophecy of many political observers that Sidhu himself being a 'motor mouth' along with his team will shoot themselves in the foot many times in the days to come.

Congress leader Manish Tewari tweeted, 'I urge @harishrawatcmuk AICC Gen Secy I/C Punjab to seriously introspect that those who do not consider J&K to be part of India & others who have ostensibly Pro Pakistan leanings should be a part of @INC Punjab. It mocks all those who shed blood for India.'

As reported earlier Sidhu had earned the ire of agitating farmers immediately after taking over when he reportedly said, 'I say to the Kisan Morcha people, my elders, that the thirsty walks to the well. The well does not go to the thirsty. I today invite you. I want to meet you.'

Sidhu had to later retract what he had said and emphasise that he supported the farmers wholeheartedly.

Recently the Aam Aadmi Party too had its brush with controversy, over the views expressed by its senior leader and former Rajasthan in-charge Deepak Bajpai. While attacking Amarinder Singh over the detention of former DGP Sumedh Saini, Bajpai had referred to Saini as a 'national hero'.

This caused considerable embarrassment to the party in poll bound Punjab where Saini is a highly polarising figure. AAP's Punjab unit itself has been reportedly demanding Saini's arrest in the Behbal Kalan and Kotkapura police firings on peaceful protestors in 2015 against the desecration of holy books, a highly emotive issue in Punjab.

'Capt Amarinder is trying every trick in the book in utter disregard to the high court to settle score with former DGP Saini. Saini is a hero who saved Punjab during terrorism days' but HC stood by a national hero. Salute,' tweeted Bajpai.

Capt Amarinder is trying every trick in the book in utter disregard to the High Court to settle score with frmr DGP S S Saini. Saini is a hero who saved Punjab during terrorism days. Ass lickers of Khalistanis celebrated Saini's arrest, but HC stood by a national hero. Salute!

He later went on to clarify that the tweet expressed his personal views and not those of his party.

Just to clarify, these tweets reflect only my view, not Aam Aadmi Party's. I m the journalist who exposed tunnel in Burail jail which was used by terrorist Jagtar Singh Hawara for escape. Saini had helped Chandigarh Police crack that case. I have my own understanding of Punjab. https://t.co/7WbNoaXOJ6

Controversy even dogs the Shiromani Akali Dal (Badal), the regional political powerhouse. There is a lot of unease over the 'Jai Shri Ram' slogans aired at events attended by Akali president Sukhbir Singh Badal, as Akalis have traditionally been seen as a 'Panthic' force.

The slogan 'Jai Shri Ram' which was a traditional Hindu greeting has largely come to be associated with the Hindu right since it started its Ram Janambhoomi movement that saw the demolition of Babri Mosque on December 6, 1992.

It needs to be pointed out that Punjab is one state that has bitterly opposed the Hindu right wing. 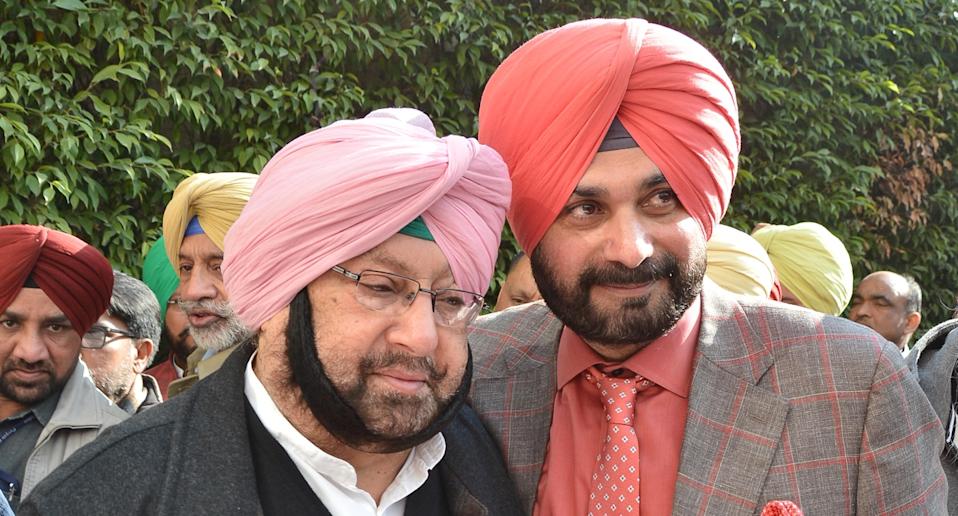