‘We are seen as the opposition’

“Our paper has had a reputation for dissent since its birth.” He says their offices in Melarmath were attacked by participants in a BJP rally amidst clashes with the opposition CPI-M underway in Agartala for the past week.

He says he has filed FIRs against Tinku Roy, Rajib Bhattacharjee and Papia Datta, all BJP leaders in Tripura, who were leading a political rally on September 9.

“It was a rally of 300 to 400 people, minimum.” He is thankful that only a few of his journalists sustained minor injuries and were cleared after tests, scans and in one case, a stitched wound.

The damage to their offices amounts to Rs 25 lakh, says Choudhury. “Four computers, eight CCTV cameras, a car, and other damages to the building.”

He says that at the CPI-M office next door, participants in the BJP rally brought out three motorcycles and set them on fire in the street.

At the main party office further up the street, at the Dasarath Deb Smriti Bhavan in Melarmath, he says they set fire to three cars parked under the building.

After the attacks, a demonstration of about 150 journalists staged a protest march for the protection of journalists under the banner of the Assembly of Journalists, Tripura. They gave the state government an ultimatum of 12 hours to arrest the culprits.

Choudhury doesn’t think the cases registered will gain any real momentum. While the state home ministry has transferred the case to the Crime Branch, he says this is simply a required tactic.

“There have been no arrests yet.. They have only done this to keep the media fraternity appeased.”

Also in Melarmath, Rajib Datta, editor of Mrinalini ENN, says “We are very disappointed and hardly have any words” about the attacks.

His channel has been shut down for the past three months, along with some other news channels. He says the broadband providers and MSOs these news channels depend on were made to discontinue services to them.

“This is the second time we have been shut down since 2018, which was when the new BJP government took over,” says Datta.

“This is 100 percent a political move. There is no doubt about it. Pratibadi Kalam, PB24, Mrinalini ENN, these are all neutral news channels. But these activists and workers are not aware of these and are at their jobs.”

“The BJP feels that we are their opposition,” he tells The Citizen.

Datta says his home was attacked by goons in August 2018, a few months after the new government came to power, which was subsequently “sorted out”. But the attacks on his channel persist.

After the first attempt to shut down his channel, he says he appealed to the Tripura High Court, where Chief Justice Sanjay Karol ordered the defendants to back off from Mrinalini ENN within a week.

Now it is the governing party’s second attempt to shut down the channel, says Datta. His lawyers are currently working to keep it afloat.

According to Pranab Sarkar, secretary of the Agartala Press Club and editor of Headlines Tripura, the current round of violence began when CPI-M youth wing workers attacked some BJP workers in Udaipur, Tripura a week ago.

He says the recent attacks on the press and on opposition CPI-M offices are a continued fallout of that event.

He also thinks it is possible that the “real target” was the CPI-M office next door to Pratibadi Kalam, and that those who vandalised the news office had “personal agendas” against the newspaper, saw an opportunity and took it.

The required report includes benchmarks for circulation, revenue and other criteria to be deemed eligibile. This is decided by an ‘Empowered Advertisement Committee’.

According to Choudhury, only two newspapers were found to qualify and were able to submit their GST documents within the one month deadline: Dainik Sambad and his own Pratibadi Kalam.

He says the newspapers that could not meet these benchmarks have come under the invisible control of the government.

“Since these organisations were unable to provide the necessary GST papers, they appealed to the chief minister for an extension.. Even the ICA Director PK Goyal is not saying anything on the matter,” Choudhury tells The Citizen.

“Our paper has faced many such hurdles,” he says, and there have been many attempts to deter them from their work.

He says he will wait another fortnight or so to see what progress the Crime Branch makes. Meanwhile he is also preparing to take the matter to court. 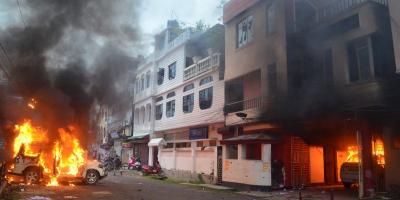