“We don’t give our house to people from the north east,” Bandita Barman has been listening to these words since the past 7 years when she moved to Delhi from Assam. ‘You people from the Northeast party a lot,’ ‘You are so noisy,’ ‘We don’t know what your family is like,’ are also amongst the things landlords have thrown at Barman because she comes from the northeastern part of the country, while none of this is asked from her friends who are from other parts of the country, according to her.

“We come to Delhi to study and work, our parents are depending on us. This is not how we live,” said Barman, 25. But according to her, living in Delhi and facing racism is a part and parcel for everyone who migrates from the North east. “Whenever we go to look for a house, the homeowners will never look at me directly. They will always talk to my north Indian friends even if I am engaging in the conversation. The other person always has more ownership than me,” she said.

Barman comes from the Koch Rajbongshi tribal community in Assam, and whenever she cooks or brings food native to her culture, it is frowned upon. “There is a certain type of food we eat that is very different from the kind of food north Indians eat and we are always questioned about it,” she said. Barman migrated from Assam to Delhi for better opportunities. According to her she is often made to feel like she has come from another country. “It feels very sad,” she said.

A study commissioned by the Indian Council of Social Science Research (ICSSR) on racial discrimination and hate crimes against people from the northeast States found that people from the region “faced an increased number of acts of hate and prejudices against them” amid the COVID-19 pandemic.

It also said that 78% of the people from the region who were interviewed believed that physical appearance was the most important reason for discrimination against them.

Another resident who migrated from Assam Zeba Ahsan had to leave her house in Safdarjung Enclave Delhi, after facing constant harassment from her homeowner about her clothes and food.

“They stare at us and we also comment on our clothes and sense of fashion.”

“You girls from the northeast are only worth three thousand rupees,” one day the homeowner told Ahsan and her roommate from Nagaland, according to Ahsan. They would also call them of ‘low character,’ and complain “these girls from the Northeast always call boys over,” said Ahsan.

Ahsan also had the realisation that people in Delhi did not have awareness about the Northeast and neither did they want to learn. “They keep confusing our states. For them, Assam, Manipur, Meghalaya all are the same.”

Ahsan moved back to her hometown in Assam during the pandemic. But she is scared to come back and search for a place to live in Delhi because of her identity as a muslim woman from the Northeast.

Keeping in mind the increased instances of racism against migrants from the Northeast, Delhi police, in 2018 had also started a toll free number in its north west cell to cater to complaints of discrimination. But the ICCSR study revealed that the racial discrimination against people from the northeast is much more deep-rooted in cosmopolitan cities and these issues cannot be solved by policing alone, reported The Hindu.

It is also very common for homeowners to address people from the northeast using slurs referring to their small eyes and facial features. “You don’t look like you’re from the Northeast,” Shakya Shamik has been told many times while house hunting in Delhi. “Where are you from,” he would be asked since he doesn't have the traditional mongoloid features, stereotypically associated with people from north-eastern part of the country. After knowing he is from Assam, homeowners would then ask him, “I hope you don’t eat animals,” according to Shamik.

Another stereotype associated with people who migrate from the Northeast is that we are junkies who consume drugs, according to Shamik. “It feels terrible, I had to leave Delhi because of depression. It can be very lonely,” he said.

“I am familiar with Delhi, but Delhi still hasn’t accepted us,” also said 45-year old Sneha Seika. The chef and a fashion designer, has been living in Delhi for the past 16 years and owns a house in Chittaranjan park. Since the first Covid-19 lockdown in India March 2020 she has faced discrimination and felt humiliated in living in Delhi. “When I try to help my relatives get a house in Delhi, they tell us we don’t give it to people from the northeast as you drink, party and bring boys,” said Seika. “The way north Indians have portrayed us, it is very humiliating,” she added.

Seika had moved her because of her father’s posting in the army. she said. Even though Seika has bought a house she has no plans to settle in Delhi permanently. “I can move in a group of people from the Northeast but alone as a woman from the Northeast, I will not step out. I feel unsafe here.” she said. 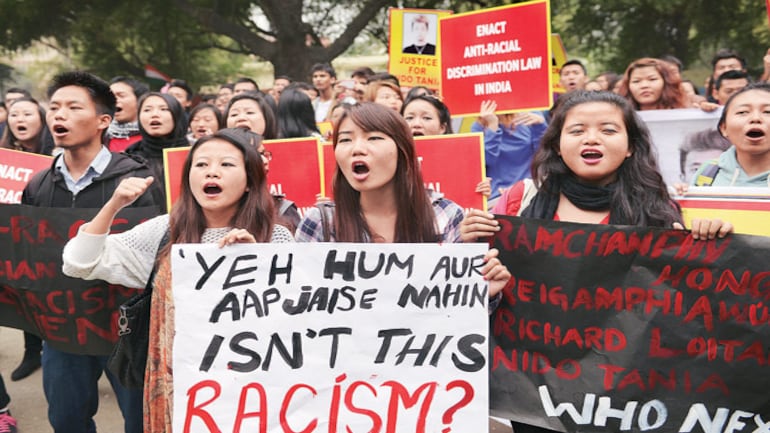