Captain and the High Command: What it Means for the Farmers Movement

A party of corporate politics

Whichever party wins or stays ahead in the assembly elections, there is always a fear of setback for the peasant movement based on the axis of Punjab. The leadership of the peasant movement and its supporters should prepare to deal with such a danger, writes PREM SINGH I do not generally opine on the internal affairs of any political party, and should have no comments on the machinations of leadership change in Punjab or the strength and potential of the new leadership.

I will only say that Captain Amarinder Singh, a veteran leader of about 80 years, appears to have been punished by the Congress high command for not visiting Delhi time and again, and for treating Rahul Gandhi and Priyanka Gandhi Vadra as ‘misguided’ ‘children'.

The new Punjab chief minister Charanjit Singh Channi has described Rahul Gandhi as a revolutionary leader. Some overzealous political analysts have sounded the bugle of a Punjab ‘revolution’ that has also reached Uttarakhand and Uttar Pradesh. Perhaps one should soon expect similar revolutions in Rajasthan and Chhattisgarh instead.

Captain must come out of his despondent mood of ‘humiliation’ and see that the traditional Dalit vote bank has started gravitating to the Congress kitty no sooner than he resigned! He might also accept the truth, told to him after nine and a half years of service, that he was a useless Congress chief minister who kept away from the public and his task.

Now Captain who has great self-esteem should understand the power of the high command, which can convert a raja into runk and a runk into raja. The multi-talented Captain, who has seen many ups and downs in his 52 year political career, must also accept that the high command culture in India's democracy is acceptable not only to MLAs and MPs but also to most analysts and experts.

There is no need to forward further arguments to state that the ongoing farmer-led movement originated from the womb of Punjab, and Captain Amarinder Singh as chief minister played an important role for its strength and longevity.

Like the leaders of the Shiromani Akali Dal, then a constituent of the National Democratic Alliance, Captain was not particularly concerned about the agricultural laws at the time of their drafting. But when the movement against the laws arose in Punjab, he played his part in favour of the movement with understanding, maturity and objectivity.

All opposition parties today are active in trying to take political advantage of the peasant movement. In Punjab a large number of farmers have been associated with the Akali Dal. Despite this it was believed that the Congress could benefit the most from the farmers' agitation in the coming assembly elections in Punjab.

A distinct lack of ideological commitment is the central character of contemporary corporate politics. Due to this, distinctions have gone hazy in the houses of all political parties. A leader or a wannabe can move in or out of any house at any time, and can tamper with and subvert the Constitution and human values for the sake of power.

The Aam Aadmi Party formed by the children of the Ford Foundation is basically a party of corporate politics. Therefore, it naturally advocates openly for ideological manoeuvrability in politics.

Navjot Singh Sidhu, who came from BJP to Congress, also has links with AAP. When the Congress high command was trying to make him state president, Sidhu loftily claimed that the Aam Aadmi Party understood his vision. It is obvious there is no place for the farmers’ movement in his “vision”. Many farmers opposed the decision to make him the state Congress president.

Now the battle is raging in the Congress about who will be the chief minister's face in the assembly elections. The way the high command has placed its hand on Sidhu’s back, he is quite clearly the face of both the election campaign and a future government. This situation fits the high command’s objectives as well because Channi was not their first and direct choice. Channi was made chief minister as a consensus candidate to tide over the moment. The task of forming a new cabinet under his leadership was performed by the Delhi high command.

It will be Sidhu’s endeavour that after the election results, he along with his supporters and AAP becomes the next chief minister.

Captain Singh has repeatedly stated he will oppose Sidhu at any cost. Akali Dal and AAP will try to take full advantage of this confusion. Both support the peasant movement with a selfish motive. Whichever party wins or stays ahead in the assembly elections, there is always a fear of setback for the peasant movement based on the axis of Punjab. The leadership of the peasant movement and its supporters should prepare to deal with such a danger.

Another issue of long term importance is security. Elements of the Sikh community settled in countries like America, Britain, Canada are supportive of the demand for a separate Khalistan from India. From the beginning some separatist leaders have been conducting their activities from Pakistan. There are intermittent reports of separatist activities and arrests from Punjab and other parts of the country.

It is the perception of the separatists sitting abroad that the goal of Khalistan cannot be achieved without breaking the supremacy of the Akali Dal and Congress in Punjab politics.

During the last general and assembly elections there were reports that separatists sitting abroad supported AAP in many ways. There are also frequent media reports of AAP leaders colluding with the fundamentalist elements existing in Punjab.

It is to be noted that the leaders of the separatist movement run in the name of Khalistan never face any shortage of funds. On the contrary, they provide funds to break the Akali-Congress supremacy to power hungry elements in politics.

When the Captain called Sidhu pro-Pakistan, some analysts called the statement hasty. But he has named the Pakistan establishment as a threat in the past as well. He is an advocate of cordial relations between divided Punjab, and in his first tenure he hosted the chief minister of Pakistani Punjab.

In his congratulatory message to chief minister Channi he drew his attention towards only one issue, that is security. Captain served three years in the Army and is a graduate of the National Defence Academy and the Indian Military Academy. The training and service of the Army has influenced his personality and style of functioning and has shaped his outlook on national security and unity.

In the politics of the country, the game of playing with the sentiments of the people for power is going on shamelessly. In the midst of all this, the supporters of Khalistan are waiting for the opportunity. It is the responsibility of the sensitive leaders of all the parties to guard against this.

Captain once said that he would write a book on the experience of that dreadful dark decade. He is a leader of stature. Instead of wasting his energies fighting the dwarves, if he focuses on the security of the nation and Punjab, he will do a yeoman's service to his commitment towards the country. 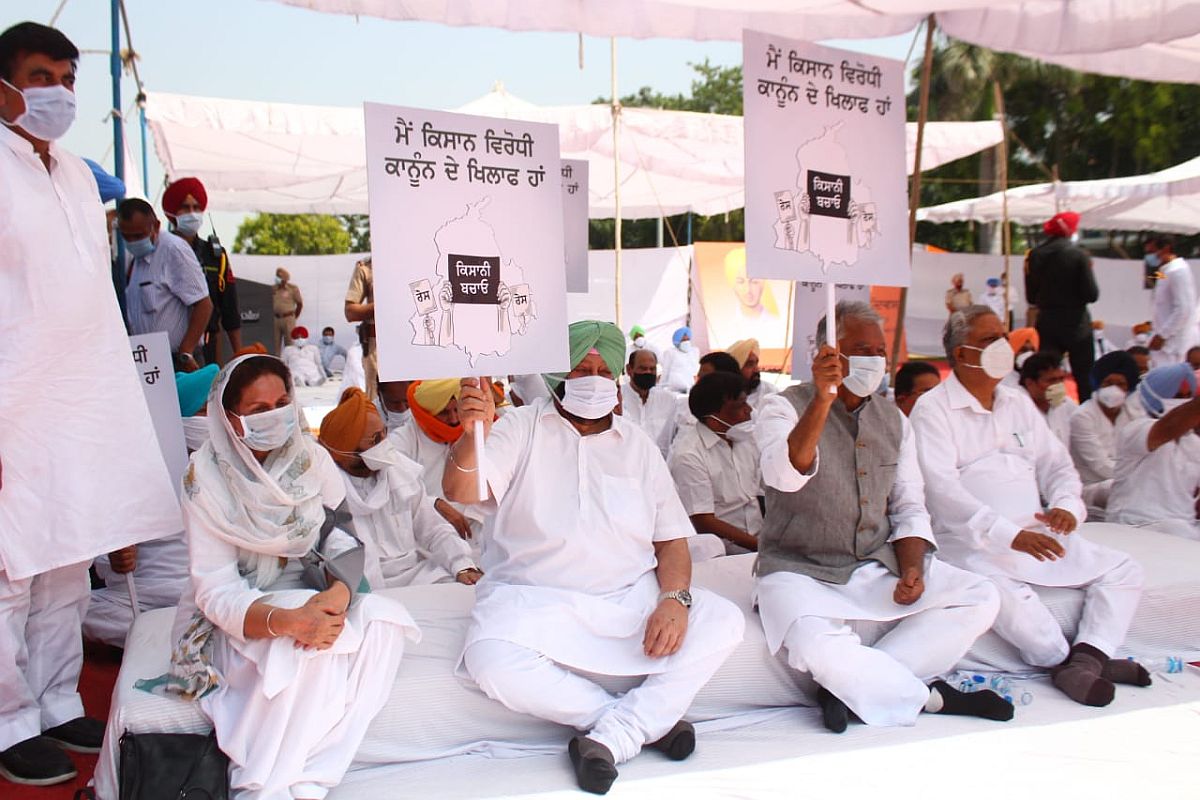