Why Priyanka Gandhi’s Nyay Kisan Rally in Varanasi is Significant

Balls up in the air

Congress leader Priyanka Gandhi’s Nyay Kisan Rally had a huge turnout in Varanasi. Not just numbers but enthusiasm with the crowd roarding in support, answering questions, offering statistics ---as in the case of the price of a gas cylinder where she said Rs 900 and the people shouted back “Rs 1000”-- as they absorbed every word. Till the very end when even after she had stopped speaking the crowds stayed to listen to poet and party leader Imran Pratpagarhi.

She spoke well, assuring the people that Congress workers were not scared, that they were with them in their struggle regardless of consequences. She linked the farmers struggle very effectively with joblesness, discrimination, inequality. She said that except for the big businessmen and the BJP, everyone else was scared and worried in the country. She said that the Prime Minister had bought two aircraft, each for Rs 8000 crores. And then went on to ask the people how much the two cost, getting the Rs 16000 cr figure from the crowd and then went on to link it to corporate monopoly pointing out that the entire asset of Air India was sold only for Rs 18000 crores.

Priyanka Gandhi interacted with the people through her speech. Smiled at them, invited them to share her slogans, asked them for figures, and kept the language simple and direct. She listed the leaders who had attacked the farmers, spoke of Hathras, spoke of the UP government handling of Covid, and of the rule through fear and terror.

She was not dramatic but matter of fact, seeming to reinforce what the people already knew but wanted to be said. She was not aloof and arrogant but smiling and friendly. It was one of her best meetings, with the crowds turning up largely because of her strong intervention in the Lakhimpur Kheri incident where videos of her warning the cops went viral all over Uttar Pradesh, and indeed India.

The meeting was significant. One because it was huge in number and the people were responsive and attentive which is always a good sign for a party before an election.

Two, she was able to build a strong and clearly acceptable counter narrative to the BJP at the centre and state.

And most important three, where the Congress has clearly become the vehicle --- at least the first political vehicle-- to bring the hitherto western UP farmers stir into central and eastern UP. And do so by linking the farmers' opposition to the larger issues of livelihood, and the take over of the land and rising prices to crony capitalism. She skilfully brought in the farmers demands into the issues plaguing non farmers in the state ---making it clear that the atmosphere of fear and terror was also targeting the country’s farmers with continuous attack as the assault in Lakhimpur Kheri.

A successful meeting thus, but then a great deal depends on the Congress party which is a faction led, weak organisation in UP. Priyanka Gandhi spoke proudly of the party but perhaps one of the weak points was highlighted in the slogans raised from the dais--that basically covered her, Sonia and Rahul Gandhi. Not a second face of any significance was visible on the dais, and the Congress as a party is not very visible on the ground in Varanasi with each leader nurturing his own faction.

In the last elections when Akhilesh Yadav and Rahul Gandhi drew huge crowds with their joint campaign, the results were dismal. Candidates of both accused the other of not working for them, and the Congress in many constituencies not having the organisation to put up a good fight. In the absence of a good crowd presence, the Congress lost a record number of seats with the BJP and Adityanath catapulting to power.

It is imperative thus, for Priyanka Gandhi who has been leading the Congress into Lakhimpur Kheri, Hathras and other spots of distress in the state to build a strong organisation in the state. This still seems to be absent and the party has still to emerge as a strong electoral entity with workers spread through the grassroots,

The second ‘if’ that the workers in the Congress are always worried about is the sudden disappearance of the Nehru-Gandhi siblings from time to time. While Priyanka Gandhi seems to have settled into leading UP, this reputation continues to dent her state party’s confidence in her ability to do so.

And three, instead of sticking to the demands and the peoples issues the Congress ensured that Priyanka Gandhi sandwiched her comments and her visit in religiosity. So she went through all the motions before the political meeting and started it with Sanskrit shlokas and her fast on the fourth day of Navratri. Congress sources justified this saying she was visiting Varanasi, and could not ignore its culture and civilisation.

Personally, Priyanka Gandhi is adding to her grist, but whether this necessarily transfers to the divided and weak Congress in UP is a ball still very much up in the air. 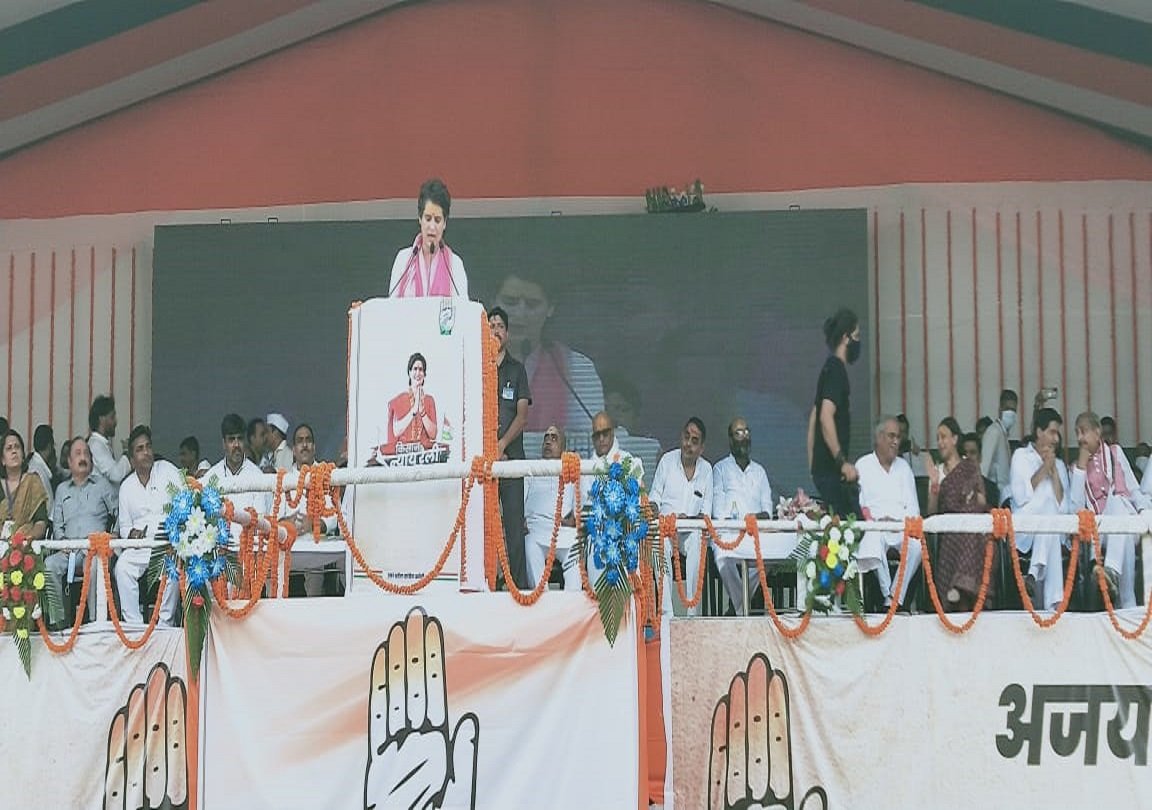