Some arrests made, compensation paid

Mixed opinions and reports continue to flow out of Tripura as ambiguity surrounds the Panisagar violence even for the residents in the state. While all confirm the violence, although in varying degrees, the sticking point is whether a mosque was set on fire or not.

Following the initial reports of violence from Tripura starting from the last week of October, various groups - teams from political parties, police, teams of lawyers, etc. have gone to the site of the violence to probe the issue.

A belated police report and official statements from the State government have categorically denied that there was any incident of arson in Panisagar. The authorities, however, admitted to the violence initially by claiming that this was caused by groups from outside Tripura in a bid to damage the state government’s image. However, the police have since arrested locals though for the violence.

The Jamiat Ulama i Hind, a socio-religious organisation of Indian Muslims with branches all over India, held a press conference in Agartala to report that a mosque had been set on fire.

Residents claim that these attacks were expected after the violence in Bangladesh during Durga Pujo. And in anticipation of the same, TSR (Tripura State Rifle) forces had been stationed at several key locations, and around mosques in particular.

Tripura DGP V.S Yadav said that the situation on the ground is entirely under control, and the government has started taking steps to provide funds and aid to the families who lost their livelihoods as victims of the attacks. He told The Citizen that it was the media, and more significantly social media, that spread the misinformation about the arson and created a stir.

“The problem has been created by social media. On the ground there is no problem.” DGP Yadav says that the police are in the process of booking certain media personnel and some social media handles for spreading fake news regarding the mosque fires at Panisagar. “They are putting pictures that do not belong to my state,” he said. The social media investigation is being handled by the Crime Branch.

“It is all political,” DGP Yadav said. “These are just groups that want to defame the government and this is how they are doing it,” he said of the attackers.

“We have identified some persons, we have arrested some persons in the Panisagar incident….that happened almost three days back….They are locals only. The government has also announced compensation for the houses there,” he told The Citizen.

DGP Yadav also said that the police have been arranging peace meetings in several North Tripura localities, because this is the area where most of the communal attacks were concentrated.

Speaking about the delay in the police statement denying the reports of arson at Panisagar, he said that the issue was still under investigation, and that is why the statement was made two days late. “We took the additional time because we had to be on the ground and handle the case,” Yadav added.

Masihuzzama Ansari, a reporter for India Tomorrow, was detained in Agartala and questioned for two hours as he was leaving for Panisagar the morning of November 3. He was interrogated by police officers from the Agartala West police station at the Hajj House where he was putting up, and at the police station - this caused a delay in his schedule, and he had to cancel his work visit to Panisagar in order to make his flight back home.

“Three police officers, again and again, were asking me the same questions. They asked me about all the delegations that had arrived in the past four days. How am I supposed to know those details,” he told The Citizen.

“They were asking me about how I came and who I came with. They asked whether I had visited the Bangladesh border - I said, ‘Why would I be visiting the Bangladesh border? I’m here to visit the place where the violence occurred,” Ansari said. He has been reporting from the ground for the past three days, and this was the first time he has been detained and questioned.

Ansari, who visited Panisagar to investigate the issue, confirmed that the government has started providing financial aid to the affected families. He referred to one family in particular who suffered losses worth around INR 10-15 lakhs, and have been given an instalment of INR 90,000 so far. He said no one was sure when the rest would be paid by the government.

However, according to Ansari, the vehement denials of extreme violence and arson, and statements of a ‘peaceful situation’ being peddled by the police were completely false. He said that a few different mosques in Panisagar had seen severe damage as a result of communal vandalism - it is only the one in Rowa that got publicity.

“The only falsehood in the reports regarding the attacks is that the mosque in Rowa was in fact not set on fire, but the surrounding houses and shops were burnt. There are many masjids in Panisagar. And other masjids in the area have been attacked and vandalised,” he said. He said a masjid in Panisagar town constructed by the CRPF (Central Reserve Police Force) was completely burned and destroyed.

Ansari said that Panisagar is currently full of police officials and the residents and aggrieved families are cautious to speak with journalists freely.

Ansari says that to the best of his knowledge, no other journalists have been detained as he was as yet.

Kalpana Sinha, President of Tripura Democratic Front, North Tripura, and an advocate by profession, on her political visit to Baghbasa in North Tripura two days ago, found that the Muslims there are living in complete fear. She said that some residents confided in her regarding their problems.

“They are afraid to leave the house after 7 or 8 PM and they were whispering to me. This means that there is a sense of fear amongst them. They told me that the day before I visited, right wing members came on bikes and rode through the locality threatening them (Muslim residents) and chanting ‘Jai Shri Ram.’ There are no physical attacks but these things are happening,” she told The Citizen. “The situation still has not cooled down yet.”

Regarding the rumours of arson in Panisagar, she confirmed that many are still not aware that there was no attempt to burn down the mosque. “I myself did not know that the reports of the fire were false. I have not personally been to Panisagar, but of all the people I spoke to over there, they all think that the mosque was set on fire, “ Sinha said. 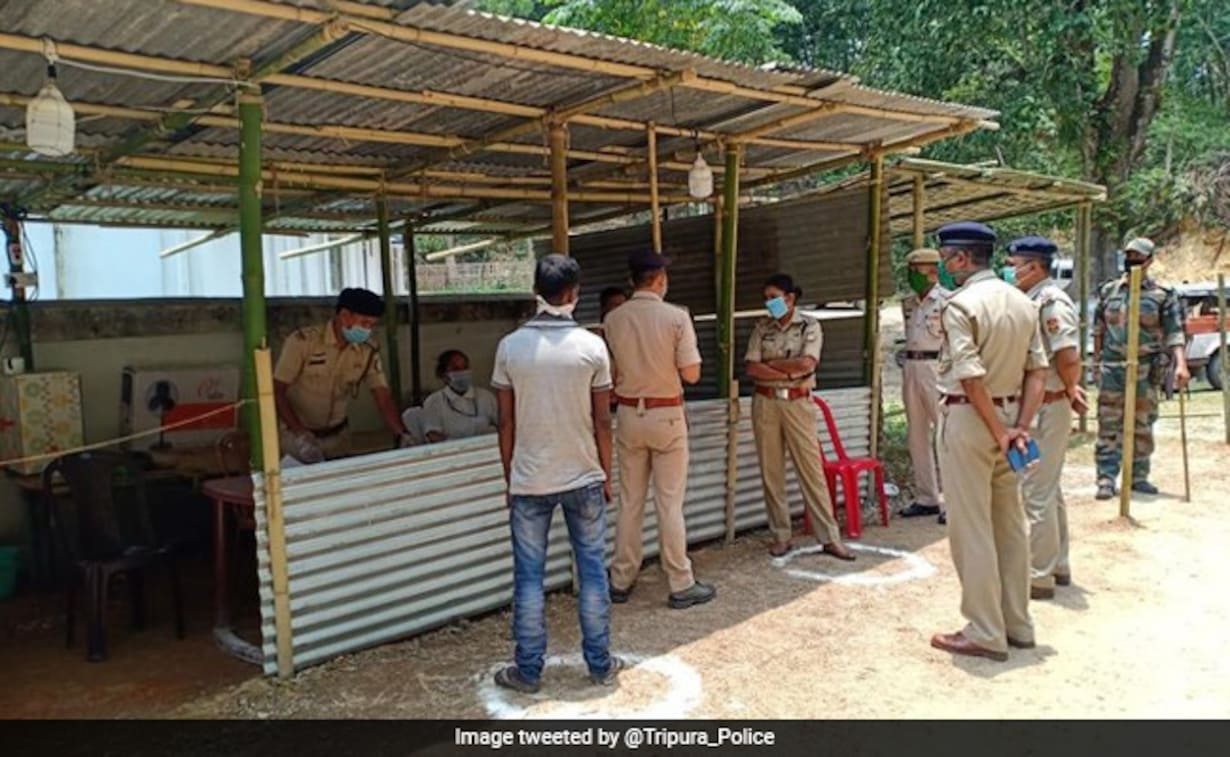