Songs and slogans of victory

The farmers have demonstrated the idea of India in their departure from the gates of the national capital after winning a historic battle against the 'anti people' policies of the central government.

Even as the country witnessed unparalleled revelry as the victorious farmers started departing from various protest sites, they were a picture of self esteem, grace, humility, simplicity, brotherhood and unity cutting across all the social and economic fault lines.

One had to just browse through the wonderful stories being reported by the small channels on social media that captured humane values propagated by these farmers, laborers and others who supported this movement and played a pivotal role in ensuring its success. Unfortunately most of this was hidden from general public view as the embedded media decided to ignore the historic moment, as expected.

Emotions poured out as the farmers packed their belongings and started moving back to their homes in victory rallies - laughter, smiles, tears, slogans and songs. A major achievement of this movement has been to bring together the people of Punjab and Haryana while mending relations where fault lines had existed since the early 1980’s. The bonds were further cemented when people from western Uttar Pradesh, Rajasthan and elsewhere joined in.

Family members of those who died in the course of the agitation came forward to say that while they had lost a loved one from the immediate family, they had added many more to their extended families in the wake of the love and respect they got from those who till a few months ago had been strangers. Farmers parted, promising to visit each other.

Several kabaddi players of international standing had worked tirelessly for months to run a langar. Preferring to remain behind the scene all this while, they came forward with a lot of reluctance to disclose how they had functioned all these months and how several international players had been pitching in through different means to keep their morale high.

Different organizations also donated blankets, water campers, ice boxes, mattresses and even washing machines to the poorest of the poor residing around these protest sites.

The farmers also set an example in maintaining sanitation while winding up their paraphernalia and getting rid of the garbage including dismantled residential structures. Some of them decided to erect replicas of various structures at their villages back home so that the generations to come would know of their historic battle against the ‘black laws’ that threatened their livelihoods.

Many of the farmers have stayed back to dismantle the bigger structures and dispose of the rubble properly.

As the farmers' cavalcades moved out towards their homes, they were stopped en route by villagers showering flower petals and respect on them. They were garlanded. There were langars of sweets, snacks and proper meals for them. Reports said that a supporter from Australia had even arranged for showering of petals from a chartered plane on the farmer cavalcades.

At every halt there were slogans raised celebrating the farmer, labor unity and unity of people from across the national spectrum. While the farmers carried flags of their respective organizations, many could be seen waving the national tricolor and tapping to the ever popular patriotic song ‘Mera rang de basanti chola’.

The langar at a sugar mill at Jind in Haryana saw volunteers working through the night to prepare and feed the farmers returning though the route. A special programme has been scheduled at the site on December 13 to mark one year of running this community kitchen.

As always it was the lyricists, musicians and singers from Punjab who came up with songs as befitting tribute to the movement while airing the sentiment of the people in the wake of the victory. There were posters that displayed a line from a popular song ‘Jitke Punjab Challeya’ by Resham Singh Anmol that read ‘Teri hik ute likh Zindabad chalaya ni tenu Dilliye’ (Punjab is returning after writing Zindabad or long live on your chest Delhi).

Another song that was released just a couple of days ago ‘Fateh Morcha’ (Winning the front) by Virasat Sandhu is about Delhites missing the farmers in days to come when they will recall that ‘Sardars’ and farmers had come and how they had won the battle through non violent means while standing for their rights.

‘Jadon mudan ge Punjab nu’ (when we return to Punjab) is yet another song from Harf Cheema and Kanwar Grewal that exhorts the people to remember every bit of the hardship they endured during this movement. It asks the people to remember who is responsible for the demise of those 700 martyrs who passed away during the course of the movement. It also talks about the brotherhood between Punjab and Haryana.

Yet another song by Kanwar Grewal and Navdeep that is becoming popular was released a couple of days ago is ‘Aien kiwen koh launge zameenan saadiyan’ (How can you snatch away our lands). Many more catchy songs are expected to come in the days to come. 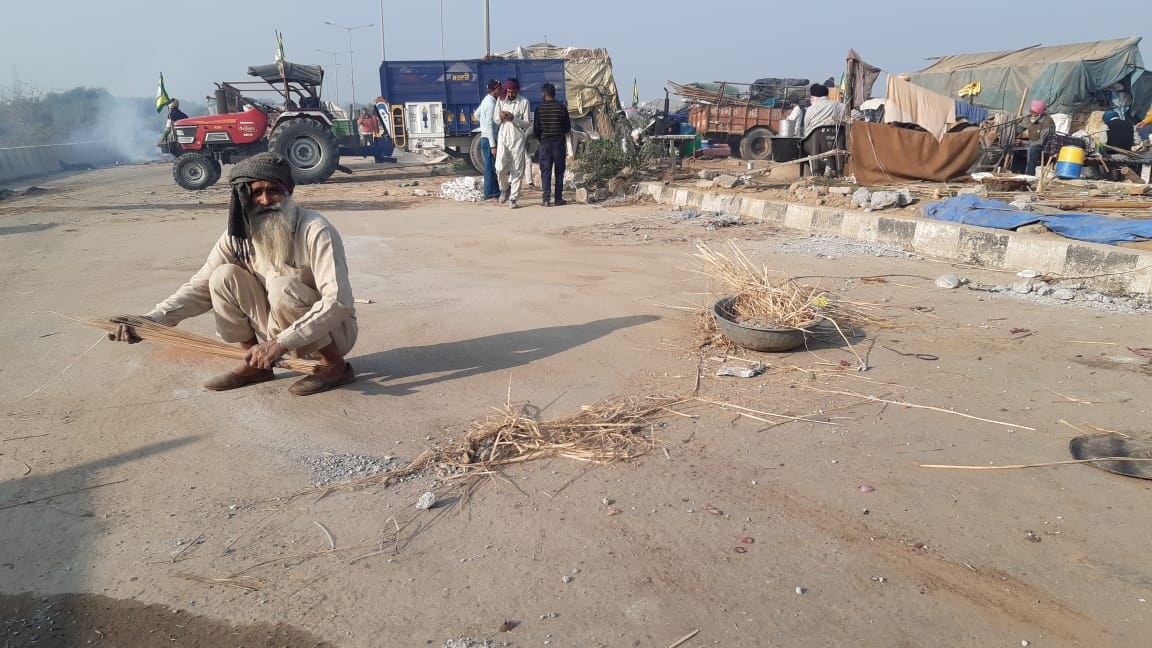