The first term honeymoon between the Bharatiya Janata Party and many of the states in India’s north east seems to be over. The Assam stir on the Citizenship Act provisions that the BJP had to work on hard to still the protests, the continuing violence in Tripura, the Assam versus Mizoram border violence where police fired on police, not to mention insurgent attacks on patrols and even the Meghalaya Governor are just some of the incidents that have created a stir in the region. The Army action killing civilians in Nagaland is now serving as the trigger for open disaffection against Delhi with the anger erupting in a massive rally a day ago.

The demand for the repeal of the Armed Forces Special Act has gained ground in the last week, with chief ministers in the region also feeling the pressure from the ground and urging the central government to repeal this draconian act. AFSPA has been a bone of contention in the states for a long time, with Irom Sharmila creating history with her long and uninterrupted fast for its repeal. No government at the centre listened to her, although she became a hero in the region she represented, and attracted global attention.

Nagaland is now on the streets for the same, insisting that this Act that has brought considerable grief to India's border states, must go. The speakers at the rally held Union Home Minister Amit Shah responsible, hitting out at him for his statement in Parliament about the Army firing and insisting that he had “lied”. Effigies of Shah were burnt at the rally, where residents of Oting, the village from where at least 12 of the coal miners had died in the Army firing, participated.

The tribal parties of Nagaland are in the lead. This rally was largely organised by an apex body of the state tribes the Konyak Union. The anger was palpable, to a point where even the state BJP president has demanded the repeal of AFSPA. The Konyak Union Vice President Honang Konyak told the media, “We are asking for justice... we don't need sympathy. Twisting of truth is unfortunate... Home Minister Amit Shah's statement in Parliament (is) confusing the world with wrong information. He should immediately withdraw... we demand his apology.”

The BJP’s initial attention to the north east had made the states and the small regional parties optimistic that the decades of neglect would be alleviated. However, the intervening years has seen little of the development that the BJP had promised, and the ensuing disappointment has been dealt with by the usual divisiveness as the violence in Assam and more recently Tripura demonstrates. Insurgency is also raising its head with even the infamous Nagaland accord between New Delhi and the National Socialist Council of Nagaland signed in 2015 coming to nought. It remains in limbo with several of the issues such as the flag and the constitution still to be addressed.It has at best led to a shrunken base for the NSCM-IM with other groups and organisations filling the vacuum in Nagaland.

The Congress lost base in the north east largely because of a wear and tear in trust and confidence. The BJP with its big promises replaced the Congress in the north eastern states, but over the years this faith too seems to have been badly dented. If this is indeed true, as the signs currently indicate, this could embolden extremist and insurgent groups in the region and lead the peace efforts back to square one, or as many in the region say, to worse. The Congress party in itself has not demonstrated any interest in the region in recent years, happy to leave it to the BJP and the regional parties to work out. The Left that had a presence in Tripura has been virtually liquidated, and despite all the noise and the thunder the Trinamool Congress is not expected to gain much ground in the region.

Shah has been unable to keep the support of the states, and the situation now is fluid to put it very mildly. The demand for the repeal of AFSPA is not likely to die down in a hurry with the Army killing bringing back memories of days that many had hoped would not return. New Delhi and indeed India cannot afford an angry and alienated North East as the region shares a border with China that still claims Arunachal Pradesh as its own. 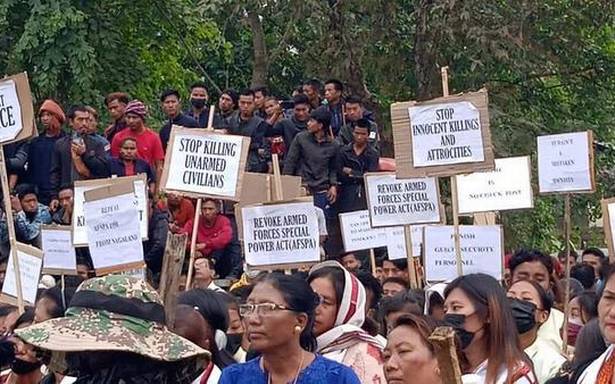