Over a week after the unprecedented shooting in Oting, Mon which killed 14 civilians on Saturday December 4, Nagaland is still waiting on answers as to who exactly are the culprits behind this act of terror.

Wango Konyak, General Secretary of the Konyak Union in Nagaland told The Citizen, “We have given thirty days to the Indian government, to bring justice in the public domain. If it goes beyond thirty days, we will continue the protest… We are planning to go to Delhi to protest this thing.”

According to Konyak, this is a failure of intelligence from the Government of India. “How come the government had no idea where the security forces are moving around?” he asked.

In a tweet, Amit Shah wrote, “Anguished over an unfortunate incident in Nagaland’s Oting, Mon. I express my deepest condolences to the families of those who have lost their lives. A high-level SIT (Special Investigation Team) constituted by the State govt will thoroughly probe this incident to ensure justice to the bereaved families.”

“We haven’t met the SIT , they are on duty,” Konyak says, of the Special Investigation Team that has been tasked to look into the ambush. “This is the duty of the government. We have served thirty days in our memorandum.”

The Sunday following this tragedy, an internet ban was imposed in Mon district. Soon after this, a mob of civilians stormed the Assam Rifles Camp in Mon district, as well as the Konyak Union Office.

Now Section 144 of the CrPC has been imposed on certain areas in Mon prohibiting public gatherings.

“The morning after the incident took place in Oting village, early the next day the net was completely shut down in Mon district.” The KU had requested around 9 AM for the concerned authorities to allow the resumption of the internet in this region, “so that we can disseminate information accordingly,” Konyak said.

The funeral service for the 14 civilians who lost their lives in the ambush was supposed to be held at 2PM on December 5. “But since the postmortem was not completed at 2PM. Moreover, we had received information that the CM of Nagaland will be attending the funeral on December 6- the next day,” Konyak said explaining why there was a delay in the funeral services.

During the meeting regarding the postponement of the funeral service at the Konyak Union offices, on December 5 “the angry mob came and vandalised all the office properties. There was nothing instigating violence - it was a communication problem. If the network had been resumed, as requested, it wouldn’t have happened,” Konyak told The Citizen. The internet connection was up again only after 3 pm, after the vandalism had already taken place.

Tsapikiu Sangtam, President of Eastern Nagaland People’s Organisation, said that the armed personnel that carried out the attack, were not part of the military forces that were settled in the Mon area. “They were coming from outside,” he said.

Sangtam, also speaking of the Home Minister’s statement in parliament said, “They are saying it is a case of mistaken identity, but we do not agree to that point….We really wonder how these people can just come in and ambush the citizens. In broad daylight at 4 o’clock.”

“Very irresponsible. As an Indian leader, one should not just take the word of any single party. Because the information from the security forces was misleading!” he added.

Regarding the investigation, Sangtam said they have heard no word yet. “It should be a fast track SIT, you see. But I don’t know how far it will go. They have said that within two weeks they will report. Till then, we have announced non-cooperation with any sort of security forces.” Sangtam told The Citizen that the ENPO will wait for the report from the SIT, and then make their next move.

“Our demand is that justice should be in reality,” Sangtam insisted. 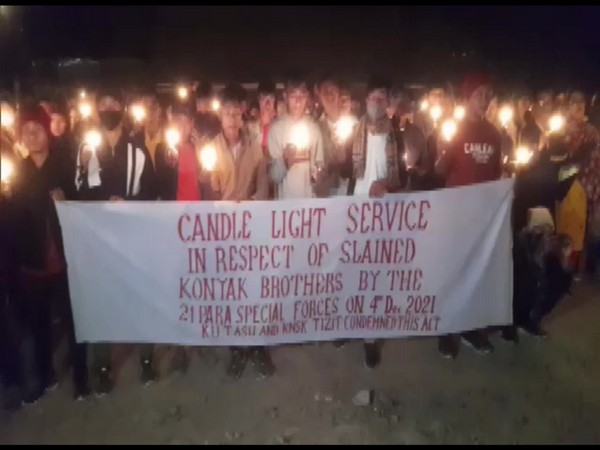