When are the Indians returning?

A big international spectacle is slated to be staged in Islamabad Monday regarding Afghanistan with the attendance of foreign ministers from the 57-member Organisation of Islamic Conference (OIC). The participants also include special invitees from the United Nations system, international financial institutions and some select non-member states, including the US, UK, France, Germany, Italy, Japan, China, Russia as well as the EU. Unsurprisingly, India stands excluded.

Significantly, the Taliban government will be represented at the event. A major Pakistani objective is to help the Taliban expand its networking with the international community.

This may not translate as diplomatic recognition of the Taliban government anytime soon but that is becoming a moot point of little practical value.

Arguably, Afghanistan still retains the core elements of statehood, as stated in the 1933 Montevideo Convention on the Rights and Duties of States, and, “if one of the constituent parts is lacking, the state does not dissolve; rather, it remains” — as a Pakistani analyst ingeniously pointed out recently — which, in turn, necessitates “state recognition”, a political act, intrinsically.

The paradox is, state recognition is a judgemental act rather than a legal act — and, in any case, the international system does not provide for any collective body with the authority to recognise states.

Simply put, some states may recognise the Taliban government and some others may not, while state recognition — positioning Afghanistan as a legal entity — becomes possible. In fact, this is already much in evidence on the part of the UN agencies, IMF, World Bank, etc. and several countries too, especially the regional countries including India.

Diplomatic recognition of the Taliban government may take time, in the meanwhile, Pakistan is helping the Taliban to take a detour so that it is equipped to conduct the business of governance. Trust Foreign Minister Amir Khan Muttaqi to make the most out of such a large gathering of the international community tomorrow.

Inevitably, such networking will translate as increased aid for Afghanistan. In particular, the rich petrodollar states of the Muslim world have a religious affinity with the Afghan people. Muttaqi is sure to chip away at their charter of demands — “inclusive government”, girl’s education, etc.

In fact, there is grudging acceptance that the Taliban regime of the 1990s and today’s Islamic Islamic Emirate of Afghanistan have little in common. Muttaqi’s exclusive interview this week with the Associated Press underscored this.

Muttaqi expressed the confidence that “America will slowly, slowly change its policy toward Afghanistan” as it sees that a Taliban-ruled country “standing on its own is a benefit to the US.” He then added,

“My last point is to America, to the American nation: You are a great and big nation, and you must have enough patience and have a big heart to dare to make policies on Afghanistan based on international rules and relegation, and to end the differences and make the distance between us shorter and choose good relations with Afghanistan.”

The perception that the Taliban seized power in Kabul is becoming increasingly untenable. The former president Hamid Karzai has done a great favour to corroborate the estimation by top US officials — especially, former special representative Zalmay Khalilzad — that an orderly transition to an inclusive government was very much in the cards but Ashraf Ghani and his clique backed off at the penultimate hour and fled Afghanistan.

The sophistry over the “legitimacy aspect” of the Taliban interim government gets blown to smithereens by Karzai’s startling disclosure while talking to the AP’s veteran Afghan hand Kathy Gannon in an exclusive interview three days ago that he personally stepped in to invite the Taliban to enter Kabul City after the cowardly exit of the Ghani regime with a view to prevent anarchy.

In the downstream of the OIC conference in Islamabad, many countries will decide to reopen their embassies in Kabul. India should be one of them. Unlike in the 1990s, the Taliban has no need to look over their shoulder for interacting with India. Taliban has reached out to India and explicitly conveyed its interest in having a dialogue.

The Taliban’s reaction to the Delhi Declaration on Afghanistan following the Regional Security Dialogue chaired by National Security Advisor Ajit Doval on November 10 came in real time. The Taliban spokesman Suhail Shaheen told the Indian media that he saw the dialogue of the national security advisors as a positive development and hoped that it “contributes to the peace and stability” of Afghanistan.

In Shaheen’s words, “If they (NSAs) have said that they will work for the people of Afghanistan for the reconstruction, peace and stability of the country…that is our objective. The people of Afghanistan want peace and stability because they have suffered a lot in the last few years. Right now, we want the economic projects in the country to complete and new projects to start. We also want job opportunities for our people. So we agree with what has been said.”

“Any move that contributes to the peace and stability of the country, provides job opportunities to the people and helps eradicate poverty in the country – at a time when 80 per cent people here are currently living below the poverty line – we support it,” he added.

When his attention was drawn to the Delhi Declaration’s call that Afghan territory should not be used for “sheltering, training, planning or financing any terrorist acts,” Shaheen reacted,

“Yes, that is our commitment. We agreed in the Doha Agreement that we will not allow any individual, entity or group to use the soil of Afghanistan against another country. The Americans agreed to withdraw their troops. This is all a part of our agreement. Yesterday I had a meeting with our interior minister Sirajuddin Haqqani and he reaffirmed that commitment during the meeting. All of our senior leadership abides by that commitment.”

As for Pakistan’s boycott of Doval’s invitation, Shaheen said, “It is up to that country to decide its position. You can ask them. As far as the people and the government of Afghanistan is concerned, we want peace and stability and resumption of economic activities.”

The Taliban no longer take the diktat of outsiders. Of course, this in now way detracts from the reality Pakistan wields much influence in Kabul today. But it signals that the old notions regarding the Taliban are no longer valid. The pendulum is swinging intriguingly. And its directions are best observed from the Indian compound in Kabul. The embassy must reopen soon. 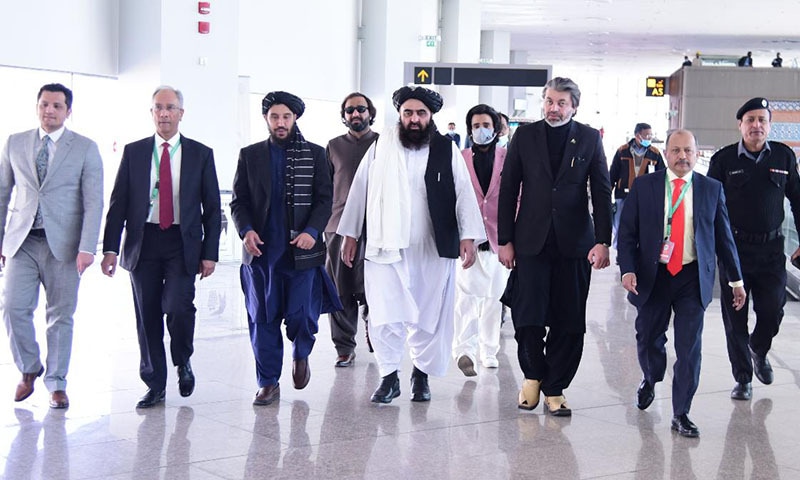