By November 20 last year, even Prime Minister Narendra Modi knew that the political ground on which he was firmly stuck had begun to wobble and shake. We knew that he knew this when he promised to repeal the farm laws. We knew, even if he didn’t, that in Punjab at least no farmers would welcome him with open arms when he came making poll promises. We also know that anybody who thinks otherwise is probably some kind of advisor to the Prime Minister - or at least should be made one without further thought.

After the fiasco of Ferozpur six days ago, when we were given to understand that Modi’s life was in some sort of danger, the quality of advice he gets has come into sharper focus.

Consider the rally he was supposed to address in Ferozpur, a town bordering Pakistan: External threat normally captures the thought uppermost on security planners on such visits. Of course the cynics among you might be tempted to say, Why should Pakistan attempt anything when the Prime Minister himself has stirred the pot quite nicely? But this is no time for such questions.

Months before such visits, we can assume that threat scenarios are gamed and sifted by the various agencies whose job it is to provide the Prime Minister with adequate security. They factor in the threat to life, what the chances are of somebody sneaking in across the border when the visit takes place, and take into consideration protests, demonstrations, Khalistanis, agitation and the like.

We can only assume that all these must have been red-flagged in a way that even the sharper, more closely held advisers, would readily spot them. We are referring to those of whom Home Minister Amit Shah purportedly told Satya Pal Mallik, that “kuch logon ne to inka dimagh kharab kar rakha hai” or words to that effect. Meaning, of course, that if the Prime Minister is remarkable, even more remarkable are his advisers.

The biggest question in front of the Prime Minister’s campaign team should have been at this point: Should he continue to spend time in Uttar Pradesh to shore up his visibly sagging political fortunes there, or should he turn his attention to Punjab? Not going to Punjab would be conceding defeat even before the Election Commission had announced the polling dates, so a token visit may have been decided. A political testing of waters.

This is when usually an advance security liaison team is formed. It consists of the Special Protection Group, which cocoons the Prime Minister mostly from the reality around him, the Intelligence Bureau which feeds the fantasy of the reality he lives in, the State Police, in this case Punjab police, the Air Force, alas, the bubble busters, and of course, lastly and perhaps most importantly, the local representatives of the PM’s party – in this instance, the BJP – who are involved in discussions of venue, stage specs, crowds, and, most importantly, who is to sit where in the dais with the Man with the Fifty Six Inch Chest.

Here are things we know now: It had been raining when the Prime Minister landed in Bathinda. If the Prime Minister did not proceed to Ferozpur by helicopter there could have been only two reasons. One that the visibility and weather was not good enough, and after the recent and unfortunate demise of the Chief of Defence Staff, his motley entourage as well as the Air Force may have baulked at the thought of risking another air accident, especially so close to the border.

From the information provided by the Chief Minister of Punjab, the protestors sitting on the road that was a contingency route for the Prime Minister's cavalcade, had been cleared by three in the morning, and the Chief Minister had called and informed the Director of the Intelligence Bureau at 6.30. The Chief Minister tried calling him earlier in the wee-er hours, but the call was not picked up – but that is another story, with almost no relevance here.

The farmers had been cajoled into leaving the spot with the promise of an audience with the Prime Minister, where they could ask him for a situation report - or sit rep - on what progress he had made on the assurances he gave them before they dispersed from the borders of New Delhi. So in all probability, that information was with the SPG security detail and the Prime Minister as well.

We now have to consider another interesting nugget of information that the Punjab Chief Minister has provided: although arrangements had been made for an audience of 70,000, barely 700 bothered to turn up at the venue. The difference between the two numbers is a measure of the difference in perception between the BJP planners and the reality on the wet Punjab ground.

We have also to assume that Modi was being kept abreast of this information from the venue. There were, we are given to understand, the state in-charge of the BJP, Gajendra Singh Shekhawat, and Captain Amrinder Singh, the party hopper, and both were doing their best to keep the small crowd entertained.

It had begun to rain. If reports are to be believed the Good Captain even credited the Prime Minister for the fortune of rain. Photographs from the venue tell us that some of those who braved the weather and all else to get to the venue sheltered under umbrellas, but others mostly under handy cut-outs of the Prime Minister. It was already a no-show in terms of the state unit’s capacity to rustle up crowds, but why blame them alone? Understandably they had to think up excuses for the poor showing. They had to blame somebody. No, you guessed it, not Pakistan.

Unless we know what transpired between the organisers and the Prime Minister, we will never know the naked truth. The record of these conversations should form part of any probe. We can guess at it though. It is a hundred and forty kilometers between Bhatinda and Ferozpur. Who knows, maybe the organisers promised an adequate audience if the Prime Minister delayed his arrival. Perhaps the weather would clear by then. Perhaps the blame for the poor show was already being apportioned. Your guess is better than most.

This is where another piece of the puzzle falls into place. The Prime Minister’s convoy usually has an advance vehicle that goes more than a kilometer ahead, reporting back to the Prime Minister’s cavalcade of what to expect on the road. Not far from the venue it must have run into an unexpected blockade, a different set of farmers from the ones who had been “cleared” after delicate negotiations and promises.

With elections in the air the Punjab Chief Minister had already declared himself in favour of Ahimsa, non-violence, and against farmers being lathi-charged by their government. Negotiations take time, appeasement perhaps longer. Who knows, if the Prime Minister had waited, crowds might have braved the rain. Now we will never know.

Certainly, from available information, when the Prime Minister turned back to Bhatinda it was a commensensical decision, one that should have been taken before he took off from New Delhi. Or when he landed in Bhatinda. When he turned back to Bhatinda airport, let us note carefully that he turned his back without a single stone being pelted, with the BJP supporters on the bridge waving the party flag as if they were all Tenzing Norgays, amidst an almost genial and surreal picnic atmosphere.

The SPG didn’t fire a single shot, nor frisk a single BJP supporter. It was, in a manner of speaking, the Prime Minister’s Andy Warhol moment. For a PM given to grandiloquent cosplaying in military fatigues and commando uniforms, military headgear, sometimes atop a Main Battle Tank, to tell the state finance minister, Manpreet Badal, “Apne CM ko thanks kehna ki main Bhatinda airport tak zinda laut paya” is as inexplicable as it is completely unsoldierly. Certainly not worthy of the army uniform he regularly flaunts.

Unless you put it down to his inscrutable sense of humour. Only that would explain why the Chinese are laughing. 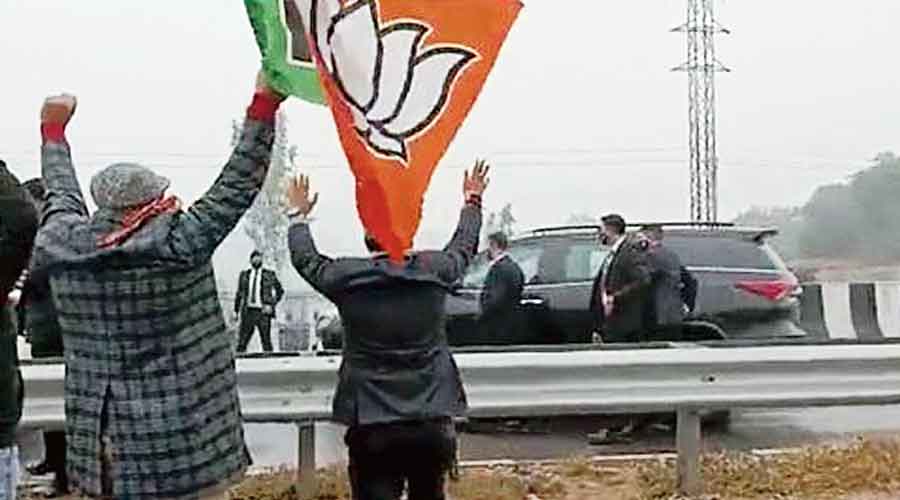 Kashmir Without a Press Club

Politicians and People Call Out The ‘Godi’ Media