The BJP’s social engineering formula, rooted in the vacuous “ sabka saath, sabka vikas” jumla, is starting to come unstuck as election dates are announced and the campaign picks up in Uttar Pradesh. Swami Prasad Marurya’s exit is an example.

Maurya, a formidable backward caste leader from eastern Uttar Pradesh, and a one time number two in the Bahujan Samaj Party, who had joined the saffron party in 2016, resigned from the Yogi government and joined the SP on January 11, 2022, post haste, in fact even before his resignation was officially accepted by the governor.

The reason he has cited for quitting the Yogi government is continued neglect of Dalits, backwards, minorities and other weaker sections of society, including small and medium business enterprises.

Maurya was the labour minister in the Yogi government. Immediately after his twitter resignation, three other BJP MLAs, all backward caste leaders, Roshan Lal Verma, Bhagwati Sagar and Brajesh Prajapati, also announced their resignation from the BJP saying they would follow in Maurya’s footsteps.

Roshan Lal Verma, while talking to reporters after handing over Maurya’s resignation to the governor in Lucknow, said for the last four and half years they had tried to draw the attention of chief minister Yogi and other senior BJP leaders in Delhi to the plight of Dalits, backwards and minorities among others in the state, to no avail. “ Leaders in Delhi listened to us, but almost always, nothing was done,” he said.So much so for the much hyped ‘ sabka saath, sabka vikas” which the BJP is fond of trumpeting.

It is no secret that backward caste leaders have often been treated as disposable commodities in the BJP’s scheme of things: to be used for garnering votes, and then discarded. The treatment meted out to late Kalyan Singh, once he fell out with Atal Bihari Vajpayee and L K Advani, is no secret. Singh was in the wilderness for many years, before he could claw back to the party.

Uma Bharati, another fiery backward caste leader and one who was instrumental in dislodging the formidable Digvijay Singh from power in Madhya Pradesh, too was unceremoniously thrown out of the party after she raised her voice against the leadership. Eventually, she too came back to the party fold, but was never given the same status as before.

And it was no secret that in the 2017 assembly election, it was the then BJP state president Keshav Prasad Maurya, who was assumed to be the chief ministerial candidate, as he slogged on the ground to lead the party to an overwhelming majority with 312 seats. But when the time came, Maurya was sidelined and Yogi Adityanath, who was not even an MLA then, was paradropped by the party high command. Keshav Prasad Marya was in such shock that he suffered a heart attack and had to be treated at a Delhi hospital. He had to be content with only a deputy chief minister tag.

Though Swami Prasad Maurya is the first big jolt to the BJP in UP from the OBC community, minor shocks, which did not make it to headlines, have been there for sometime. Some backward caste leaders, like Madhuri Verma, MLA from Behraich, Shiv Shankar Baghel, MLA from Banda, Rakesh Rathore, another OBC leader from BJP, have deserted the BJP and joined the Samajwadi party in the past few months, indicating that there indeed was some unrest among this community against Yogi’s policies.

Significantly, after the demolition of Babri Masjid and Kalyan Singh’s unceremonious exit from the party, the BJP had once again been stamped as a party of the upper castes only, basically a “Brahmin-bania” party, getting only 15-20 percent votes.

After 1991, when it had formed the government with Kalyan Singh as chief minister, its highest point was in 1996 when it had got 32.5 percent votes. It was downhill after that. In 2002, its vote percentage was only 20.12 percent, with 88 seats.

In the subsequent election in 2007, the year Mayawati made a record of winning majority for the first time on her own, the BJP managed 16.97 percent votes with only 51 seats. In 2012, this tally further went down to 47 seats, with only 15 percent vote share. The Samajwadi Party, belying expectations, had then captured 32 percent votes with 224 seats.

It was only in 2017, when Modi arrived on the horizon, that the BJP could taste success once again. Flaunting Modi’s backward caste status, and keeping Keshav Prasad Maurya as the face, the BJP could manage to win over 40 percent of vote share, with 312 seats then. This was when riding on the Modi frenzy, most of the OBCs and Dalits had reposed their faith in the BJP, hoping for acche din. All other parties had become inconsequential then. But obviously, this magic is now wearing off and the crude reality is dawning on everyone.

The Samajwadi Party, on the other hand, which had unabashedly championed the cause of OBCs and minorities, has once again started emerging as the fulcrum around which the opposition activity is beginning to be galvanized.

Not only the non-Yadav OBCs , but the minorities too are showing a preference for the SP, as was evident by prominent Muslim leader from the Congress party, Imran Masood, joining the Samawadi Party recently. Imran Masood, considered a strong leader of the community, is believed to command substantial Muslim support in western Uttar Pradesh. He is the nephew of nine time MP, late Rasheed Masood, who held sway in western UP for decades.

In Uttar Pradesh, Muslims constitute 19 percent of the electorate. The consolidation of their votes, and if it gets combined with other numerically strong categories like the OBCs, which are roughly 35 percent in UP, a formidable combination emerges. And it was this combination which propelled the mandal politics in Uttar Pradesh post-babri masjid demolition, keeping the BJP out of power. Modi’s arrival had destabilized this combination.

Now, it seems, the wheel is coming full circle. According to the 2011 census, there are 15 districts in UP, with over 83 seats, where Muslims can influence the election outcome because they are between 30-50 percent of the electorate.

On 83 seats, where the Muslim vote can influence the outcome, the BJP had registered victory on 62 in 2017 election because the election, for various reasons, had then got polarized into a 80 versus 20 percent vote. The SP had won 16 of these seats while the BSP and Congress had won two each, with RLD winning one.

Splintering of the Muslims vote and unprecedented consolidation of Hindu votes, had resulted into the spectacular victory of BJP at that time. But if an anti-clockwise churning has begun, of which the early signals are already visible, could Yogi’s 80 Vs 20 become prophetic, though the other way round? 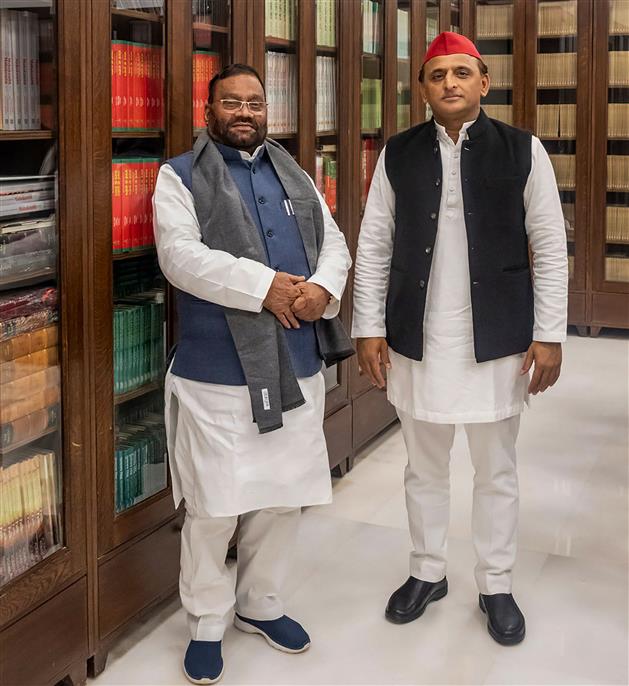