The Pied Piper of Lucknow

Half a decade later, Akhilesh looks more relaxed and in control

The political alliance stitched together by the Samajwadi Party looks more colourful than a rainbow on the eve of assembly elections in Uttar Pradesh. And watching his followers multiply, it is no exaggeration to say that Akhilesh Yadav, SP president is as popular today as the proverbial Pied Piper.

Akhilesh is son of the 82-year-old Mulayam Singh Yadav who founded the socialist Samajwadi Party in 1992. The Yadavs are one of the largest groups within the Other Backward Classes category, traditionally belonging to a pastoral caste.

The greatest political success of Akhilesh Yadav, 48 was the landslide victory his party won in the 2012 assembly elections, after which he served as UP’s youngest chief minister till 2017.

The Samajwadi leader is not new to political alliances. In 2017, he had allied with the Congress Party and in the 2019 general election with Mayawati’s Bahujan Samaj Party. But neither of the two alliances yielded the SP any political gain at the polls.

This time round the party will contest the elections arm in arm with a number of smaller political parties that have scattered but rock-solid local support in various parts of the state. The hope is that together they will add 15% to the SP’s loyal 25% vote share that had propelled Akhilesh to power in 2012.

“The current alliance with many smaller parties representing the interest of some of the most backward communities in the state is perfectly in sync with the socialism that Akhilesh believes in. Ever since Akhilesh Yadav joined active politics and became state president of the SP in 2009, his dream has been to practise the ideas of social justice closest to his heart,” a senior SP leader told The Citizen in Lucknow.

Akhilesh Yadav got an opportunity to practise what he preached during his term as chief minister. Unfortunately, much of that time was spent in ‘obeying’ his father and holding himself back from rebelling against uncle Shivpal Singh Yadav. The public here witnessed Akhilesh often being reduced to tears by both his father and his uncle. Most of his time and energy between 2012 and 2017 was spent in trying to safeguard his chair in the chief minister’s office.

Half a decade later, Akhilesh Yadav looks more relaxed and in control. He has emerged today as a politician in his own right. He might still consult his octogenarian father and the taciturn Shivpal Singh but he wears the mantle of the main leader of opposition in the state with confidence.

The Progressive Socialist Party (Lohia) founded by Shivpal Singh in 2018 is part of the SP-led political alliance today.

Those close to him, confide in anonymity that Akhilesh Yadav still dreams of a society that is fair and just. He would like to rise above caste considerations to benefit those most in need. Communalism and communal violence are anathema to this former chief minister even though he is not very vocal about the plight of minorities these days.

Dalit leaders too find it difficult to trust Akhilesh. Expressing disappointment, professor Ravi Kant at the Lucknow University points to the laidback and tardy attitude of Akhilesh towards continuing atrocities against Dalits in the state. Kant says he is not sure how sensitive Akhilesh is to the plight of Dalits in UP.

Chandrashekhar Azad, 35-year-old leader of the Bhim Army met the SP president last week and concluded that Akhilesh does not need his support in the coming elections. According to Azad, the SP leader does not understand the meaning of social justice. Justice in society does not come only from talking about it.

Those who admire Akhilesh Yadav say that his heart is in the right place. He wants to be leader of all communities that are being kept behind, including Dalits. The inspiration to do so goes back to the ideas of Ram Manohar Lohia, the socialist politician and freedom fighter who died in 1967.

Lohia was born in 1910 and throughout his adult life he stood up against the caste system. For Lohia the caste system was evil. Even more evil was the greed for electoral gain that makes politicians engage only with those lowered-caste communities that are numerically large. This kind of electoral politics has left smaller caste groups high and dry. But if all the different caste groups big and small are united, their combined strength is formidable.

Lohia was the mentor of Mulayam Singh and Janeshwar Mishra, ideologue and co-founder of the SP. It was said that Mulayam Singh took no decision without first consulting Mishra, and it was only after a nod from Mishra that Akhilesh made his debut in active politics. Mishra had influenced Akhilesh a great deal.

‘When I became president he told me that you are not a leader right now. But work hard for two years, then I will come to your rally and raise a slogan of “Akhilesh Zindabad” in your support. That is when the others will accept you as a leader,’ recalls the Samajwadi chief with a nostalgic smile. And adds with a refreshing candour, ‘Kitna bada dil tha unka’ (What a large heart he had). ‘Who does this in rajniti?’ implying ‘Who raises slogans in support of a junior in politics?’

Sahgal also notes that it was Mishra who gave the young man his first lesson in political authority when the 35 year old continued to touch the feet of his party seniors even after becoming state chief. ‘How will you discipline them if you keep showing them deference?’ pointed out Mishra. ‘But at least allow me to touch my father’s and your feet,’ protested Akhilesh Yadav.

As chief minister, he named a 300-acre park after Janeshwar Mishra. Landscaped in imitation of London’s Hyde Park, this green space in the heart of Lucknow cost Rs 170 crore and was opened to the public in 2014. Mishra died in 2010. He was called Chhote Lohia throughout his life and Akhilesh learnt a lot about Lohia, and about socialist principles from Mishra.

Lohia wanted to wage war against the entire caste system. He wanted the simultaneous elevation of all oppressed groups, large and small. According to Lohia the most oppressed groups in society include all women, Dalits, Shudras, Harijans, Muslims and Adivasis. To help all these groups, who together make up the majority population of the country is to practise socialism. And like Lohia, Akhilesh Yadav believes that a larger alliance of all the backward castes is necessary not just for winning elections but also for bringing about a healthy change in society.

So the SP has reached out to the Rashtriya Lok Dal, the Suheldev Bhartiya Samaj Party, and Shivpal Singh’s Pragateesheel Samajwadi Party (Lohia) amongst others. Akhilesh is trying hard to be accepted as a leader of all backward caste voters and not just of the Yadav community. He realises that to win elections he must increase the SP’s vote share from the 30% won in 2012 to beat the 40% vote share enjoyed by the BJP since 2017.

Even if all Muslims and all Yadavs vote for Akhilesh Yadav today the tally remains about 25 percent. Add to this the expected 15 percent vote share of the many smaller parties that are now in alliance with the SP and get a whiff of the grand total of 40 percent the alliance needs for victory.

However, only time will tell if Akhilesh Yadav, the Pied Piper of today will be head of government tomorrow. 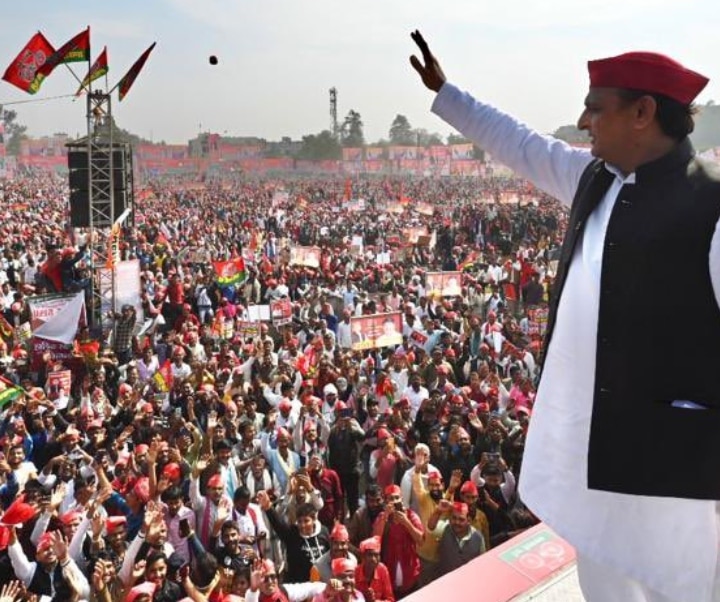