‘Virtual campaign means loss of livelihood for many’

This poll season is proving to be an altogether different experience in Punjab. With the restrictions imposed by the Election Commission the emphasis on virtual campaigning (at least for the next few days) is playing out in a very interesting manner.

Punjab stands out in comparison to the other poll bound states of Uttarakhand, Uttar Pradesh, Manipur and Goa because of the splurging that candidates are known to indulge in and the distinct manner in which poll campaigns are carried out in the predominantly rural landscape.

With big rallies out of the question for now, candidates and parties have taken to social media in a big way and what is in the offing is a whole lot of Facebook lives, Twitter wars and bombarding of voters through messages on Whatsapp. This of course in tandem with door to door campaigns.

A whole lot of creativity is going into designing social media messages with catchy taglines, memes targeting political rivals, digging into video archives to expose any promises made and broken, with some vitriolic personal attacks on contestants. Some animated clips show politicians going after aliens (their rivals) and there are also musical clips presenting leaders like messiahs.

As a result those who are not well versed with the technology are lagging behind, and have to rely on whatever means are available with them to reach out to voters.

“Aspirants in Punjab normally start gathering the phone numbers of their voters almost a year in advance. This is coming handy this time as they are easily able to reach out to the people on Whatsapp,” disclosed an observer with experience managing poll campaigns in the past.

“To begin with poll expenses have come down as candidates do not have to spend on liquor and other extravaganza that is normally offered to the teams that campaign for them for days ahead of the polls. With the possibility of a traditional campaign lasting only a few days, these expenses are sure to come down dramatically.

“In the long term it can reduce corruption also to some extent as the politicians just go for the kill when they are elected to recover the expenses incurred in the run up to elections. Even going from door to door makes the campaigners a bit more accountable to the voters,” underlined Ujagar Singh, a keen observer of electoral politics for several decades and a public relations professional who has worked with several major politicians.

He however added, “At the same time virtual campaign means loss of livelihood for many who manage to make an extra buck during the polls. These include those who provide tents and chairs for rallies along with those who go around in rickshaws carrying loudspeakers seeking votes for candidates.”

Also hit is the industry that was flourishing over the last few years where media professionals took over as poll campaign strategists and made a quick buck. The scope for politicians’ press notes being carried frequently has shrunk with many newspapers folding up their local city editions or drastically reducing their pages. And for their social media campaigns, parties have centralized teams at party headquarters while individual politicians are hiring youngsters at very low rates.

“This sort of campaign is a challenge for the Sanyukt Samaj Morcha (the banner under which more than 20 farmer organizations are contesting the polls). But the Whatsapp groups formed to galvanize support during the farmers’ movement are coming in handy. The Morcha is mainly relying on the ground connect,” said retired sociology professor Manjit Singh.

The last assembly polls had seen the likes of Aam Aadmi Party leaders like Bhagwant Mann (the party’s current chief ministerial face) and Gurpreet Ghuggi who are well known comedians provide a lot of entertainment to the masses. Not to be left behind was cricketer turned politician Navjot Singh SIdhu the wag who did some pinch hitting for the Congress.

Campaign in Punjab means a lot of humour and verbal duels that people remember for days to come. In the past there were representatives like Bir Devinder Singh and Gurcharan Singh Tohra who were known for their verbal duels. And political parties like the Shiromani Akali Dal would effectively use the Dhadi ballad singers to lampoon their rivals.

For now, everything remains in the virtual domain. With political workers yet unsure whether ground campaigning will be allowed and for how long, the emphasis is now on door to door visits by small teams while persuading voters to view virtual addresses by star campaigners.

As of now, the ECI has disallowed road shows, padyatras, vehicle rallies and processions till January 31. Physical meetings of concerned political parties or contesting candidates are allowed only in designated open spaces with a maximum of 500 persons or 50% of the capacity of the ground for some days.

Meanwhile, teams of 10 persons excluding security personnel are allowed for door to door campaigns. The ECI has also allowed video vans for publicity with the usual covid restrictions at designated open spaces with a maximum of 500 viewers or 50% of the capacity subject to public convenience and smooth traffic flow.

It is being expected that if the restrictions are removed towards the end of the campaign, the routine colour that makes polls in the state a spectacle will still return. Till then one hardly gets the feeling on the roads that a state assembly electoral battle is on. 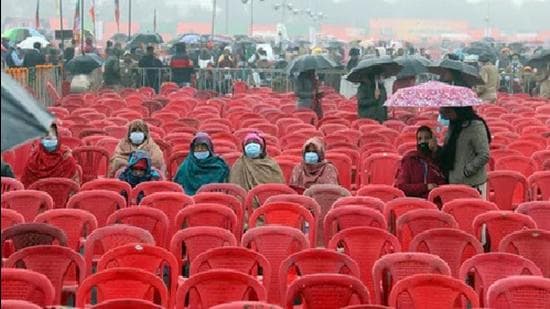