Voters say they are disillusioned with the others

As Punjab heads to the polls on February 20, the disillusionment of the voters with the two traditional political powerhouses – Congress and Shiromani Akali Dal (SAD) (Badal) – is visibly more pronounced in the all important Malwa area of the state.

A sordid tale of broken promises, undelivered announcements over several decades is now getting reflected in the strong presence of Aam Aadmi Party (AAP) candidates on the ground. Whether it actually gets translated into votes on February 20 remains to be seen.

The story had been pretty much the same last time in 2017 also but the so called ‘wave’ for AAP at the time had fizzled out, resulting in a landslide victory for the Congress under Captain Amarinder Singh.

After that the AAP presence in the region had also dwindled although the party’s Bhagwant Mann had retained his Lok Sabha seat from Sangrur in the 2019 parliamentary polls. However, in the last few days AAP support in this region of Punjab has reached new levels, in what appears to be a fairly sudden development.

People on the ground say that by declaring Bhagwant Mann as its chief ministerial face, AAP has earned fresh support. Voters say openly that they have tried both the Congress and the Akali Dal for decades now, and hence voting for change is definitely called for.

Malwa is one of the most important regions of this border state. It accounts for 69 of the total 117 assembly constituencies and hence sets the tone for the composition of the new government. Majority of the chief ministers of Punjab have been from this region. This time also the chief ministerial faces Charanjit Singh Channi from the Congress, Sukhbir Singh Badal of the SAD and Bhagwant Mann of AAP are from this region.

The Malwa belt of Punjab is mainly agrarian and has a history of political and people’s movements. Whether it was the Naxalite movement of the late 1960s, various farmer movements spread over several decades, Left agitations or the most recent farmer movement that ultimately led to the withdrawal of ‘black’ agricultural laws, all of them have sprouted and bloomed from this belt. The farmers from this region have been a force to reckon with and have been dictating state politics.

This prevalent political culture has also got defined in literature that has been coming out from this belt. Malwa is also liberal in context of the state being a playground of Panthic issues and the Dalits of this region are quite different from Doaba region when it comes to political affiliations and behaviour.

Coming back to the present scenario, while the people’s real issues are playing out it is the cascading impact of the demonetization of 2016 and the ‘mismanaged an impractical’ lockdowns imposed in the wake of the outbreak of Covid 19 that also find an echo among the common folk.

“Lack of employment avenues had compelled me to try looking for emigration possibilities. The first time I got deported from Thailand as things were not in order and on the second occasion I had to return from Dubai because of the lockdown. Today I am compelled to drive an E-rickshaw,” said Harvinder Singh who preferred to be addressed as Harry. He drove this reporter around Dhuri from where Bhagwant Mann is pitted against Dalvir Singh Goldy of the Congress who is the sitting legislator. Goldy and his supporters have been playing up a road he got cleared, parallel to a Toll Plaza so that the people do not have to shell money.

Many small businessmen and others complained that demonetization and lockdowns had broken their backs economically. This had led to even small businesses not becoming viable for the educated youth coming out of the educational institutions. Perhaps this gets best reflected in the IELTS coaching centres that have mushroomed in this area in the last seven to eight years.

“We had to fall back on our small farmland when we were hit by demonetization and lockdowns. We have managed somehow but the future of the educated youth is pretty bleak,” said Sukhvinder Singh Ranike who works as a daily wage painter in Dhuri town.

The political wisdom of not jumping to conclusions was best spelt out by septuagenarian Bihara Singh as he sat stitching trousers on the roadside on his old rickety sewing machine in Dhuri.

“Making a noise is something else. But you must remember that traditional parties do not allow newcomers to spread their wings that easily. It all comes to the point when the voter goes to press the button on the electronic voting machine and what goes on his or her mind at that moment. It is a fact that our lives have remained the same over all these years as we have witnessed promises getting repeated time after time,” he said.

The people are disillusioned with the way they have been treated by various governments. “If there is a huge pothole outside my house it is the government that has to repair it as I neither have the resources nor the technique to do the job. I can request them, express my annoyance by hurling abuses but ultimately I have to bank on them for resolving my problem,” said Mohammad Hassan from Malerkotla, the only Muslim dominated constituency in Punjab, as he sold guavas in Dhuri.

The people in Dhuri and later Barnala reflect the prevalent mood in the Malwa region as one travels through the villages. If one talks about what is working for AAP, the women voters in particular say that they are attracted by the Delhi model of Mohalla Clinics and good schools. They are agitated over the government health centres having become little more than referral centres over the years. The continuing menace of drugs also finds a major place in their list of complaints.

AAP has also made a strong political statement by fielding a couple of candidates from common backgrounds who are posing a very stiff challenge to their opponents.

One such candidate is Labh Singh Ugoke who is contesting against Channi on Bhadaur seat. He runs a mobile repair shop, his wife stitches clothes and his mother is a sanitation worker while his father was reportedly employed as a driver. Channi is also contesting from his traditional stronghold of Chamkaur Sahib.

People are drawing parallels with the 1952 polls when one Ajmer Singh of Communist Party of India (CPI) while campaigning on a hand cart had defeated a scion of royalty from this seat even though he had campaigned in a car.

Another candidate is Narinder Kaur Bharaj who is contesting from the Sangrur seat. She had shot to the limelight when she, a student and daughter of a farmer, had managed an AAP booth in 2014 parliamentary polls in her village despite stiff resistance from all corners.

Observers point out that if AAP fares well in Malwa it would be because of a negative sentiment against others in the fray, as well as hope for a change for the better.

The Congress and Akalis also have their strongholds in the Malwa region which they are going all out to protect while looking to increase their seat tallies.

The old timers point out that in this multi cornered political contest across Malwa the winning margins are going to be small and victory and defeat will all boil down to the nth moment of the democratic exercise. 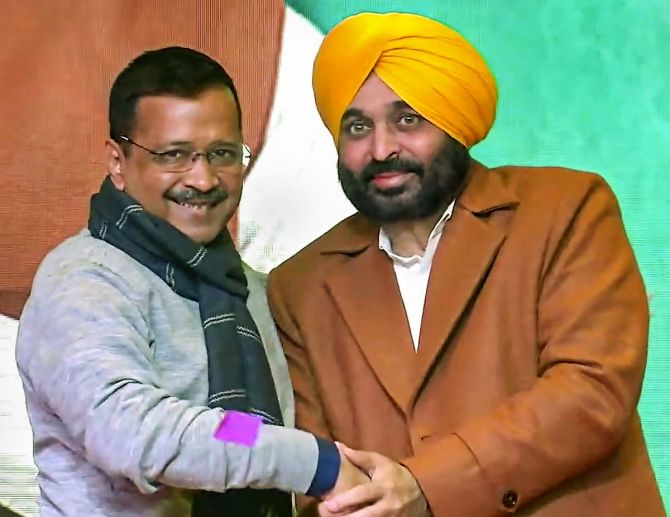