A large number of the farmer organizations in Punjab who were amongst those spearheading the agitation for the repeal of the three farm laws have thrown their hat in the political ring. They have formed the Sanyukt Samaj Morcha (SSM) to contest the polls.

The larger organizations like Bharatiya Kisan Union (BKU) (Ugrahan), BKU (Dakaunda) and Kirti Kisan Union and eight others out of 32 organizations have not become members of SSM. Just as well, ironically the Sanyukt Samaj Morcha has been able to gain dividends from the farmers protests, and remains without mass support on the ground.

However, the larger organisations have not been lying low. While in principle many have asked their cadres to vote for any political party they want, they are holding meetings asking the voters to examine the ground reality for themselves and understand when and how peoples issues have vanished from the political narrative.

Alongside protests against the BJP leaders campaigning in the state continues unabated, with the farmers showing black flags, burning effigies and raising slogans against the ruling party at the centre.

The protests are now questioning the government’s failure to fulfill the promises it had made in a letter issued to the organisation on December 9 last, on the basis of which the farmers had withdrawn the morchas from the gates of Delhi.

The cases against the farmers have not been withdrawn, and compensation these organisations point out, has still to be paid to the families of those who had died during the agitation. There is a great deal of resentment amongst the peasantry about the government’s failure to move ahead on the Minimum Support Price as it has neither formed the promised committee, nor has taken the talks on the composition and the mandate forward.

The red rag is the government’s insistence not to dismiss Union Minister of State Ajay Mishra Teni whose son Ashish Mishra was accused of mowing down farmers at Lakhimpur Kheri. The Allahabad High Court’s decision to grant bail to Ashish Mihsra has added further fuel to the fire.

The farmers want the release of the prisoners who have completed their sentences in jail. “While the release of political prisoners does get raised, it is the cause of such poor prisoners that needs to be addressed. There are a large number of such people languishing in the jails who cannot furnish bonds and have no resources at hand,” Narayan Dutt of the Inquilabi Kendra Punjab told The Citizen at Barnala.

The farmers' organizations are also protesting against the Punjab government for not giving the compensation that was announced for the loss of the cotton crop as well as the loan waiver. A protest against this has been going on at BudhLada.

The farmer organizations that are not contesting the polls continue to pose questions to all the politicians entering the villages about what they have done or plan to do for the farmers, for generating employment, tackling the menace of drugs, ensuring safety and empowerment of women, ensuring free education for the masses, doing away with privatization, tackling inflation, bringing people out of debt traps etc.

Meanwhile, the reasons responsible for the SSM not getting mass support for its electoral battles are many. It is generally felt that while the individual farmers and various organizations had come together for the fight against the farm laws, they have always had their ideological leanings and political affiliations.

Narayan further explained, “It takes a long time for a political party to shape up. While the SSM has a roadmap on agriculture, it does not have the answers to other issues like education, drugs, health, employment, economy etc. These are the sectors that need to be worked upon and it will take time.”

There is also a movement going on asking the people to evaluate what they have gained from the present model of elections and governance. Conferences have been held at several places like Jagraon and Barnala while another is scheduled at Mansa.

The organizers say that such events are aimed at ‘exposing the system’ that cheats the masses.

Meanwhile, the SSM continues its fight in the political arena. On Wednesday, some former IAS, IPS and Army officers affiliated to Kirti Kisan Forum (KKF) came out in its support appealing to the people of Punjab to elect SSM candidates in the interest of the State.

They said in a statement that it was a need of the hour to join hands in support of the SSM to Punjab from politicians, who have been looting the state for the past many years. “All Punjabis should unite and vote against the forces that have ruined Punjab over the years,” they said.

They pointed out that with their firm faith in the democratic system, values and peaceful modes of protest, the farmers have brought glory to the state by getting the three controversial agriculture laws repealed without resorting to any violence and running the agitation with great sagacity for more than a year.

“Because of the historic victory on the Delhi borders, every Punjabi has been holding his head high. History would never forgive us in case we fumbled at this crucial hour of electing our representatives,” the statement added.

The SSM supporters have been saying that the farmers’ agitation had set new milestones transcending the narrow social divisions. It brought all sections of the society on one platform and gave them courage to raise their voice against what they feel is unjust and not in the interest of the people. It strengthened democracy and people's trust in peaceful means of protest while kindling a new hope among deprived and distressed people.

The SSM might not be making political waves but one thing that is for sure, the farmers are determined to chalk their own route to their own goals. 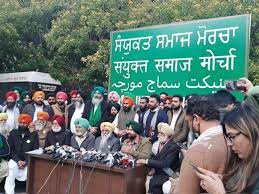