‘A radical and absurd shift’

The University of Delhi’s decision to opt for the Central Universities Common Entrance Test (CU-CET) has stirred dissent with various participants describing the step as unwarranted especially in the wake of the pandemic.

DU announced in December that it would adopt the CU-CET as its entrance exam for undergraduate admissions from 2022. Sixteen members of the Academic Council, the university’s highest academic body comprising nearly 150 elected members, opposed the move. The AC also submitted a dissent note to the Vice-Chancellor in this regard.

The dissent note states that only the pandemic-hit academic session had been taken into account in the proposed report submitted during the AC meeting on the CET. It calls for an investigation into the diversity of applicants coming to DU before the conclusion is reached that more applicants are indeed coming from certain boards (the Kerala State Board).

Mithuraaj Dhusiya, an assistant professor from Hansraj College and an elected member of the AC expressed his concerns for students who are still at home, especially class 12 students, who will be the first batch to experience these changes.

“Why should we put a Central University into an experiment mode when the pandemic is still not completely over?” he asked, adding that with this announcement students will start focusing on CET prep while neglecting their school education. “This will not only affect class 12 students, students from lower classes will also start focusing on entrance tests,” Dhusiya explained.

Associate professor Naveen Gaur from Dyal Singh College, who is also an elected member of the Academic Council, called the decision a “radical and absurd shift… as DU gives admission to over 70,000 students, the admission procedure should not be changed in a rushed manner.”

Gaur said with not many months left for the new session to start, the mode and format of the examination is still not clear. There is no information on the number of questions, time duration or the type of questions which has created an atmosphere of uncertainty and confusion among students. Any major changes in the admission procedure should be well advertised giving at least a year’s time for school students to gear to a different model, he said.

Without addressing key questions like the mode and format, total expenditure, change of streams etc, the “desirability and feasibility of CET remain unknown,” the dissent note states.

Teachers fear that their students’ analytical thinking will not be developed. “One of the serious problems with this CU-CET is the uniformisation of all the streams,” said associate professor Pankaj Jha who has taught history at the university for 15 years.

When part of the PhD selection committee of DU, he observed that students who made into PhD programs on the basis of the entrance didn't have the analytical thinking required for research. He fears the same will happen if students are encouraged to take liberal arts courses on the basis of multiple-choice or short-answer questions.

Teachers also say these entrance tests pretend that all students are alike, irrespective of their streams or background.

The way the mismanaged pandemic has hurt household incomes, forcing students to drop out of colleges and schools, is well established. Teachers add that it has also increased the gender divide, and women are likely to be worse hit by the latest move.

Abha Dev Habib, an assistant professor of physics at Miranda House, says that lowered-income families who favour their sons’ education will not prefer to spend on their daughters’ studies at overpriced coaching institutes for admission into undergraduate courses. And taking the entrance exam itself will impose an additional financial burden, including the problems of going to examination centres, application fees, delay in results and so on.

There is also the growing problem of 100% cutoffs. DU has been conducting admissions on the basis of the percentage students secure in their Class 12 board exams. However, colleges are often forced to admit more students than they can teach as they can’t deny admissions if the aspirant meets the cutoff.

University documents refer to this issue as “over and under.” While the university claims that the CET will end this problem, some members of the Academic Council think otherwise. Mithuraaj Dhusiya argues the CET will not be able to end the cutoff conundrum, as eventually there will be a cutoff in CET scores as well. “What will happen if students score 100% in the entrance tests in future?”

Pankaj Jha thinks the 100% cutoffs are a symptom of a problem in the larger education system. Since the currently available seats in colleges and universities are not enough to accommodate deserving aspirants, there is a need to increase the number of institutions of quality higher education. Other AC members also suggested regulation in marking 12th board papers. “Why give 100 marks in a subject like English?” asked Habib.

No inputs have been taken from the students’ bodies. Some Left student organisations like SFI have released statements condemning the decision. After talking to some students of class 12, I found that those living in cities with monetary support have started taking coaching classes but underprivileged students in remote areas hardly know how to go about preparing.

Meanwhile some coaching institutes have started providing online and offline classes with a total fee starting from 10,000 to 40,000 rupees. A coaching institute based in Munirka, Delhi said the majority of their students are from big cities like Mumbai, Bangalore and Delhi. According to Dhusiya, requiring preparation by coaching institutes will further commercialise higher education. He said one of the AC members had cited the example of the JEE examination instead, and how the same model can be used in DU.

Students and parents are confused and private coaching classes have come up in numbers to take advantage of this. Zaara, a class 12 student from Delhi said that until December 17 students like her were focusing on their board exams and the CU-CET declaration came as a shock to them. With the school and university providing no guidance and no proper information, her parents enrolled her in coaching which has taken a toll on her mental health. Zafar, a class 12 humanities student from Delhi, finds it cumbersome to balance the board exams and entrance exam preparation.

Dhruv, another class 12 student was apprehensive that being a humanities student he would find it difficult to solve the aptitude questions with math questions. “I didn’t choose maths in 11th because I was terrible at it but now I have to take coaching as I have no choice.” Fatima, a class 12 student from Nuh, Haryana didn’t even know about the change in the admission process when asked about CET. “Due to COVID we barely went to school and didn’t have any student-teacher interaction,” she said.

Students like Fatima feel their batch has become an experiment of sorts due to the sudden introduction of CET by Delhi University, which has put their careers at stake. With only a few months left for the new academic session to begin, students are juggling between board studies and preparation for entrance exams. While the DU administration claims that the move to introduce CU-CET will make admissions more “inclusive and equitable,” students find themselves in another imposed conundrum. 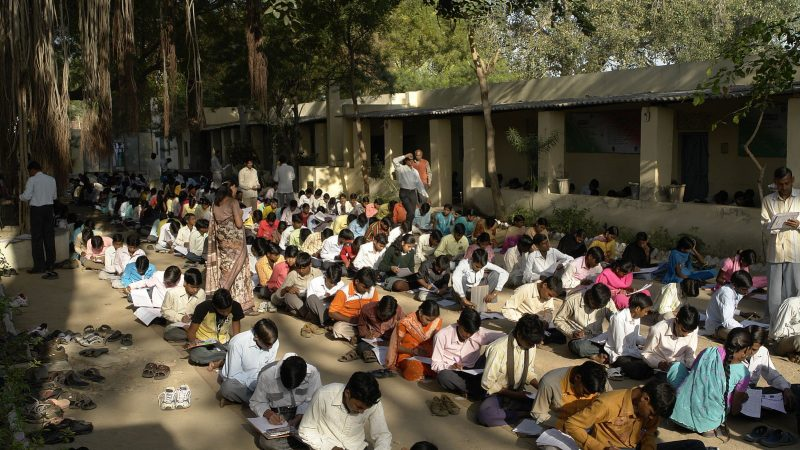