What We Learnt About the UP Vote Through 7 Phases

The trends of voting

The ballot box contains the verdict and that will be known only on March 10 when the votes are counted. But there is still a great deal that has been established in Uttar Pradesh during these elections – voting in seven phases — till now. And all of it is extremely important as it will have a bearing on politics after the government is formed, one way or the other.

One: the UP voter cannot be subsumed and pressured beyond a point. The exercise of democracy has burst the iron wall that seemed to have confined UP residents for the past five years, with the voters out on the roads sharing their views without trepidation with any scribe roaming around with a camera and a mike. They have lots to say, with the passion always associated with this populous state. And they fight and argue and shout, but laugh at the end of it all with a camaraderie and an excitement that has always been peculiar to Uttar Pradesh and its chattering masses.

Two: the Mandir-Masjid card has not worked to intoxicate the entire population as the BJP was claiming, and the opposition had feared. As the ground reporters travelled through the state - west to east– the voices gathered strength “yes i believe in the temple, but that is my personal belief”: “we need jobs the mandir cannot give us jobs”; “there is no Hindu Muslim these were all diversionary tactics, we live together, there is no animosity”; “the Muslims have as much right to India as the Hindus” …. And much much more in this vein. Articulated, emphasised and driven home by voters at tea shops, in the villages, in market places. Assertions that have clearly worked as balm for the frayed Muslim psyche with the initial silence of the minorities seen in the first phase dissolving into participation by the eighth phase of the polling.

Three: The focus has shifted entirely to unemployment, price rise, health care and education. Reasons might vary but these are the issues being emphasised from across the state by voters opposing the chief minister and the BJP. BJP supporters of course insist that there has been major development, and continue to count the temple as one of these. The response from the vikas wallahs is that the temple was not built by the BJP but on orders of the Supreme Court, an argument that seems to have spread across the state. However, unlike the last elections when mandir-masjid, Hindu-Muslim took centre state and dulled the impact of demonetisation, this election around livelihood seems to have surged towards the front ranks. In that it is being articulated pretty vociferously across the state.

Four: the Muslims all across UP have taken a decision. Not to indulge in tactical voting, not to debate and question, but to vote for the Samajwadi party, eyes closed. And when asked they do not speak of victimisation, but join their voices with the other voters to say they are voting for vikas, development. In fact every now and again, a Muslim voter when so asked would say yes he voted for the BJP in the last polls but this time he was voting Samajwadi. Why? Because there has been no development. As a result his voice merges with the arguments in UP, and the Muslim voter does not stand out as odd or someone with a different agenda at all. This has been the strength of UP always - the Muslims here are those who took a conscious decision to stay back in India after Partition, and are as embedded into the ground as any other caste or community. In the process voices like those of Asaduddin Owaisi have been muted, with his candidates barely heard of or from. Many Muslim voters in fact went on the record to tell reporters actually working to report honestly from the ground, that Owaisi was a BJP agent. And they were voting for Akhilesh Yadav. So much so that in the Mukhtar Ansari stronghold, a reporter asking a Muslim voter whether he was voting for his son who is contesting replied, “I do not know about these people, I am voting for Akhilesh Yadav and the Samajwadi party.”

Five: In clear categories the Rajputs and the Brahmins are voting for the BJP; the Yadavs and Muslims for the Samajwadi party. This electoral fight is between these two parties with the Congress and the Bahujan Samaj Party barely registering their presence. But it is the shift in the other backward and Dalit votes that will make the difference. As well as the ability of the voters to identify themselves as sections owing allegiance more to their profession than their caste. For instance, the farmers and the students — both having the ability to cut across caste and religion. The farmers consolidation as a voting bloc was seen after a long time in west UP; and as the voting moved towards the constituencies in the east the youth and students have started emerging as a vote bloc as well. Astute journalists with an ear to the ground can pick up the signals of course, but it is difficult to certify the same.

The cacophony of exit polls will dominate the air waves from this evening (March 7) with hysterical anchors projecting themselves and the figures to please those who determine their existence. The voter of UP who has not hesitated to denounce the media and its partisanship openly throughout the elections will wait for March 10 with the sanguine spirit, and quiet dignity that she has exhibited throughout this long campaign. 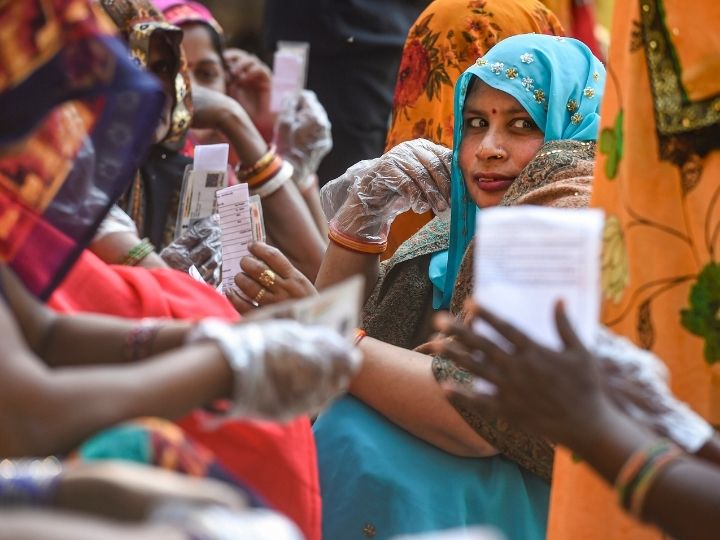