The Modi factor, his tried and tested Gujarat Model of contesting polls, a fertile ground for the Hindutva narrative and the Congress penchant for own goals have together resulted in the Bharatiya Janata Party returning to power in Uttarakhand. It is the first time in the state’s 21 year history that voters have returned a party to power.

With nothing to sell to the electorate in terms of its performance in the state, the BJP fell back on Prime Minister Narendra Modi’s popularity to deliver, and once again he proved to be the man of the hour for the Sangh Parivar party.

Just before the polls the BJP was battling heavy anti-incumbency in Uttarakhand. Despite having sold the idea of a double-engine model of government, where the centre favours states governed by its own party, the BJP had to change chief ministers three times in the last five years. The first choice of Trivendra Singh Rawat turned out to be hugely unpopular for his indecision and ineffectiveness. The second, Tirath Singh Rawat hardly got any time to deliver anything, and by the time the third in Pushkar Singh Dhami was anointed to the post the state was already in election mode.

Sources say the BJP is all set to go ahead with yet another new face for chief minister.

The party’s image had also taken a beating in the state because of the scandal surrounding the Kumbh Mela of 2021 with fake Covid tests and changes to the land laws. Observers say that in such a dismal scenario where the Congress was raising the pitch for change, it was left to the Hindutva footsoldiers to lift the party out of the red. These footsoldiers prepared the ground and from there it was Modi and his Gujarat Model of campaigning that took over.

Observers point out that in the last five days of the campaign where public rallies were allowed by the Election Commission, Modi addressed two such meetings, while the central leadership of the party including union home minister Amit Shah went in for carpet bombing of the political landscape. The communal pitch was raised to ensure polarization of voters without naming the Muslims anywhere. The Sangh Parivar cadre had gone around spinning a communal narrative in the hills as well as plains districts through the social media and pliable mediapersons as a prelude to this carpet bombing.

Among these was the lie that the seniormost Congress leader Harish Rawat had promised a “Muslim university” in the state and was giving leave to Muslims in government offices to offer Friday prayers. A morphed picture of Rawat presenting him as Sir Syed Ahmad Khan who had established the Aligarh Muslim University was widely circulated before the Election Commission stepped in.

Another lie that was effectively spread was that of “Land Jihad,” allegations that Muslims were acquiring land in the hills where more and more mosques were coming up. Observers say that this was happening when it was actually the BJP government that relaxed land norms in the state, with the stated purpose of developing the hill areas. One can understand the reach and effectiveness of the Hindutva lobby in Uttarakhand through this campaign.

Because of the high share of raised-caste Hindus in the hills Uttarakhand has been ideologically close to the BJP. The saffron force was in shock when the people elected a Congress government in the first assembly election in 2002. Thereafter the poll results have been very close on every occasion except for 2017 when the BJP swept the polls in a Modi wave.

This time round Modi and the BJP’s central leadership kept raising the communal narrative in their trademark style without naming Muslims. They asked the crowds in the rallies, “You know what the Congress wants to do? How your culture and religion will be impacted…?” This reminds one of the manner in which Modi swung the entire narrative in the 2007 Gujarat election in the BJP’s favour by raking up the infamous police killing of Sohrabuddin Sheikh, and the ‘maut ke saudagar’ (merchants of death) comment by Congress leader Sonia Gandhi.

“The Congress could do nothing to counter this onslaught in the final leg of the campaign. It was also having problems putting its own house in order,” said veteran political observer SMA Kazmi who has been documenting political developments in the state right from its inception.

Observers add that having given the important positions of National Security Advisor to Ajit Doval and Army Chief and Chief of Defence Staff to the late General Bipin Rawat, both from Uttarakhand, Modi has been riding high on the minds of people as a large number of youth here continue to aspire for a job in the defence or paramilitary forces. Modi’s development narrative highlighting projects like the all-weather Char Dham highway to Hindu pilgrimage sites, extension of rail network etc is also accepted by the people of the state.

All this while, the Congress was proving to be a disaster. If not infighting, what can explain the loss of Harish Rawat who was the presumptive chief minister in case the Congress won? The decision to field him first from Ram Nagar and then to change his constituency to Lal Kuan at the eleventh hour points to the state of affairs in the Congress. Sources say that party leaders had taken victory for granted and the debate was on whether Rawat would be chief minister again or his archrival Pritam Singh, or would the party repeat its Punjab strategy and put a Dalit, Yash Pal Arya in the driver’s seat.

Meanwhile the disarray in the Uttarakhand BJP can be gauged from the fact that former chief minister Trivendra Singh Rawat refused to contest, and the last incumbent Dhami has lost. 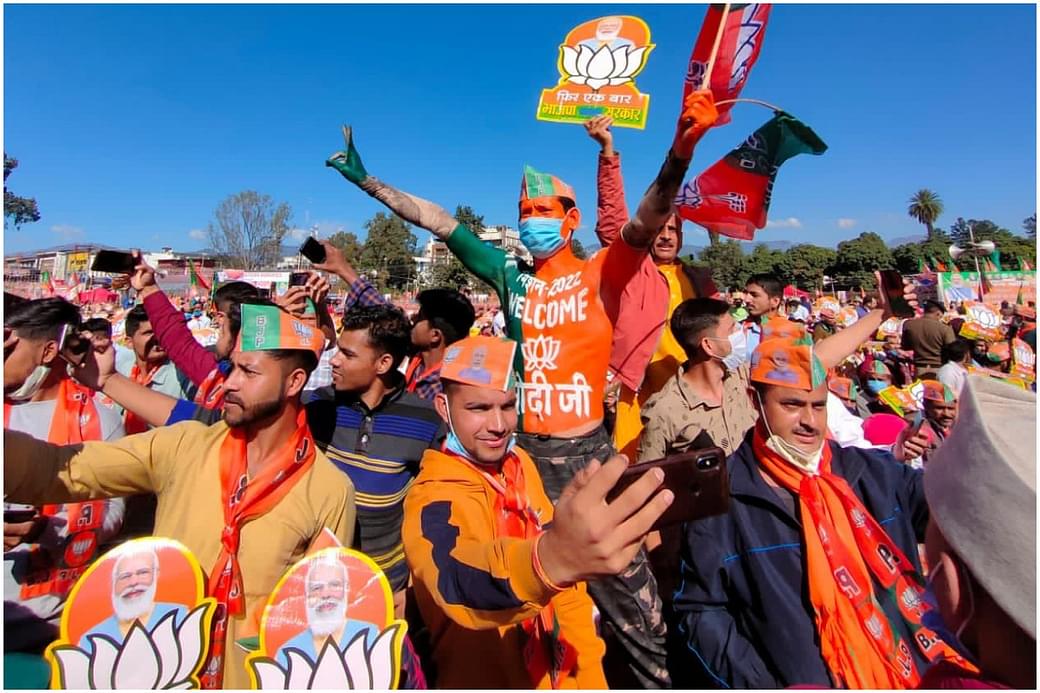