Poll Verdict : End of the Road for Dalit Politics in the North?

Is it the end of the road for Dalit centric politics in north India?

The election results provide several pointers in this direction. The Congress chief minister in Punjab Charanjit Singh Channi, a Dalit, lost both the Assembly seats he contested from. The Bahujan Samaj Party’s performance in Uttar Pradesh has been disastrous. Chandrashekhar Azad Raavan, a ‘promising’ Dalit leader, chose to leave his bastion in western Uttar Pradesh and contest the elections against Chief Minister Yogi Adityanath in Gorakhpur, unsuccessfully.

So on one side it was the sitting chief minister of Punjab who lost from both the seats of Chamkaur Sahib and Bhadaur and on the other side was the BSP supremo and former chief minister who surrendered meekly in Uttar Pradesh. Both the results are a big setback for Dalit politics.

The only solace that the BSP can draw in Punjab is that it managed to open its account in the state assembly after over two decades with its candidate on Nawanshahr seat Dr Nachhatar Pal returning victorious. But this means little against the UP reality where the BSP could win just one seat despite having been in power at least four times in the state.

Dalit thinkers and activists told The Citizen that the subsequent void in Dalit politics in the northern states of India was worrisome. And that the transformation that was brought in by Kanshi Ram in electoral politics has come to a complete standstill now.

point towards a void emerging in Dalit politics in the northern part of the country that will only get filled with time. They feel that the political revolution in electoral politics started by BSP founder Kanshiram has come to a standstill for now.

Both UP and Punjab have a high percentage of alits, but the vote never really did consolidate in the states. The Congress was unable to garner Dalit support despite Channi, and the BSP’s non performance just helped scatter the Dalit votes that felt and appeared rudderless in UP.

Dalit activists are particulaly incensed about Mayawati, who is even being accused of helping the BJP through this non-performance. Kanpur based Dalit activist Dhaniram Panther said, “This time a large number of Dalits chose to vote for the Samajwadi Party. The vote share of the BSP has come down by almost nine per cent. The Dalits feel that just like Mayawati had supported the BJP to defeat the other parties in Bihar, she played a game to ensure the BJP’s victory in Uttar Pradesh. There are two lines of thought, one is the vision of Babasaheb Bhim Rao Ambedkar which is ‘Manavtavadi’ (humanitarian) and the other is ‘Manuvadi’ (the caste hierarchy of Manu). It is evident that the latter is being promoted through the communal polarization of Hindus and Muslims. The Dalits are also wary of losing their reservation benefits as everything is being privatized.”

He further said, “The quam (community) is not dead as can be seen in context of the spontaneous response across India to the Supreme Court verdict that had come on the Scheduled Caste/Scheduled Tribe (Prevention of Atrocities) Act in 2018 or the Bhima Koregaon event. It is the leadership that has died. The new leadership will come whether through Chandrashekhar Azad Raavan or someone else. Or else Mayawati will have to change her pattern of politics that she is following at present.”

Dalit scholar Bhagwant Rasulpuri appeared to be pessimistic about the future of the community in the north. “There is definitely a leadership crisis among the Dalits at present. Only time can tell when a new leadership will emerge. At present there is no big leader among the Dalits who can take the centre stage. In the case of Channi too, reverse consolidation has taken place. Otherwise he would not have lost to unknown faces on reserve seats,” he said.

Activist Tarsem Peter who has been working with Dalit farm labour and other groups on the ground embaroated, “the top Dalit leadership, whether it is Mayawati in Uttar Pradesh or Channi in Punjab have stood at a distance from the people. The people never accepted them as they failed to raise and address their issues. Did Mayawati campaign in Punjab where her party was contesting in alliance with the Shiromani Akali Dal (SAD)? Did she raise the issues concerning the Dalits in the state? The Dalits also understood that Channi had been made to consolidate their votes and not to deliver on their issues. In fact all the parties were talking about making a Dalit chief minister or deputy chief minister only because it was election time and Dalit votes mattered.”

Peter said that for the time being there is no Dalit political leadership in sight.

“We used to wonder what Kanshiram was up to when we saw him pedaling his cycle for several kilometers moving from one village to another. It was later that we understood that he was organizing the Dalits politically. There is no such leader visible right now,” he said while pointing that the vote in Punjab was not seen to be on the side of the Dalits. He went on to point out the Aam Aadmi Party (AAP), despite the impressive mandate, would find it difficult to address Dalit concerns.

BSP chief in Punjab Jasveer Singh Garhi went on to say, "We accept the decision of the people of Punjab. The people of Punjab need health, education and employment. AAP will work for equality. We urge them to work for the economic liberation of every poor person by abolishing capitalism in the program of economic equality.”

"Even though we have not been able to come to power and we have not had a single legislator for the last 25 years, we have been fighting for the people and taking to the streets. Today we have Dr. Nachhatar Pal in the Vidhan Sabha, the temple of power,” he added. 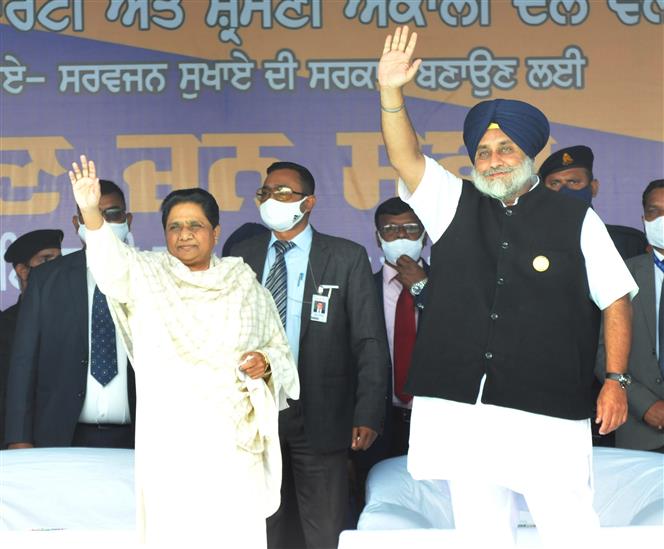